Want your money to work for you while you enjoy your retirement? Owning shares of Enterprise Products Partners, Emerson Electric, and CF Industries will help.

There are lots of ways in which someone can generate returns in the stock market. For the individual in retirement who wants his or her portfolio to generate income, though, dividend stocks are one of the best ways to go. Those quarterly cash payments can go a long way in supplementing income and can help mitigate the need to draw down one's investments for cash. Of course, the higher the yield on that dividend stock, the better, but you also want that stock to make good on those dividend payments for years to come

That's why Enterprise Products Partners (EPD 0.60%), Emerson Electric (EMR 2.37%), and CF Industries (CF 1.93%) look appealing to the dividend stock investor today. Not only are they solid businesses, but they're selling at very modest valuations.

Pipelines -- the other oil investment
As oil prices have declined in recent years, they've taken the entire energy industry with them. If you were to look at the results of Enterprise, though, you might not notice it that much. Since oil started to decline back in 2014, Enterprise has only seen its EBITDA decline a couple of percentage points and has remained solidly profitable. That performance can be attributed in part to its structure -- which uses fee-based contracts to insulate a company from commodity prices -- and in part from a management team that's taken a much more modest approach to growing the business during the boom times. 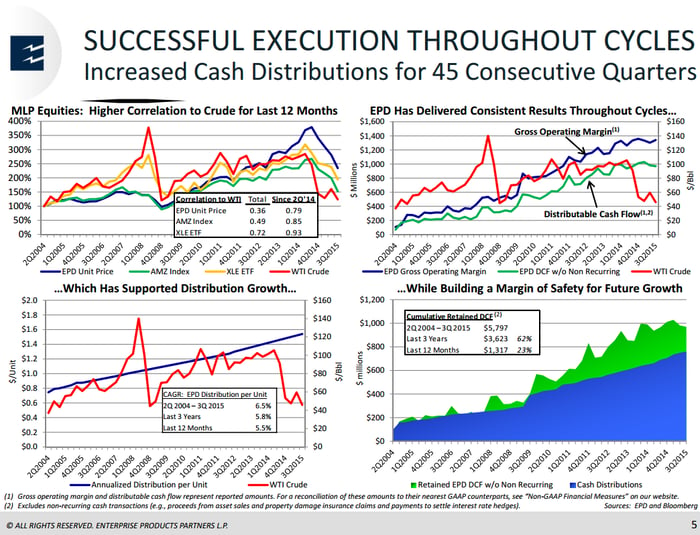 This approach has worked through multiple commodity cycles, and has allowed Enterprise to put together a 18 year streak of annual payout increases. That kind of consistency in a volatile commodity market is something few other companies have been able to replicate.

Despite the company's strong performance, Wall Street has undeservedly punished Enterprise's shares such that the company's stock has a distribution yield of better than 6%. With plenty of modest growth ahead of it in the coming years and a penchant for raising its payout every quarter, now would be a great time to benefit from Wall Street's aversion to anything oil.

Riding the ripples of oil's wider impact
The decline of the energy industry has had some pretty far-reaching effects, and one of the companies that's become caught up in the waves is Emerson Electric. Over the past year, earnings have declined in the double digits, as its sales to the oil and gas industry, along with sluggish results from foreign currency effects, have led Wall Street to shy away from the company's stock.

As a company that's regularly paid and increased its dividend for more than 57 years, Emerson isn't taking part in it first rodeo. The company has worked its way through multiple industry cycles, all the while keeping an eye on maintaining strong cash flows that have led to its dividend streak of more than half a century. At the same time, it's not exactly sitting on its laurels to wait for the market to pick back up again. Emerson CEO David Farr has stated that the company plans to sell its network power segment as well as its motors and drives and power generation segments. This move will lead to a company that's focused more on industrial automation and residential products, two segments the company believes will lead to higher margins and some extra cash to make acquisitions in this part of the business. 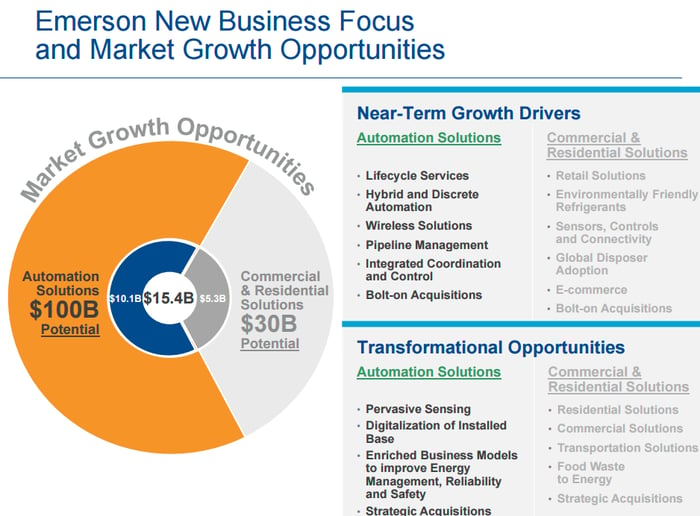 While the company's current dividend yield of 3.4% may not wow anyone looking for high-yield stocks, it is one of the highest yields Emerson's stock has traded at since the recession in 2008-2009. When you add in the company's penchant for raising its dividend, it looks like a pretty opportune time to pick up shares in an industrial stalwart.

Feeding your dividend appetite
Oil and gas isn't the only cyclical industry in a funk right now. Another one that's really struggled recently is, surprisingly, fertilizer and agricultural products. Shares of fertilizer producers such as CF Industries have been left with bargain-basement stock prices, and very tempting yields.

One of the reassuring things about fertilizer and the agricultural industry is that demand is pretty inelastic. We all gotta eat, and rising populations and incomes around the world mean more food needs to be put on tables. The problem for fertilizer companies is getting the supply side of the equation right. A couple of years of big harvests have brought down the price of food products, which has led to lower fertilizer demand. What's promising about CF Industries, though, is that the company has remained profitable through the recent downturn. As a North American nitrogen fertilizer producer, it enjoys a massive advantage over global suppliers because of cheap natural gas and one of the better looking balance sheets in the business. 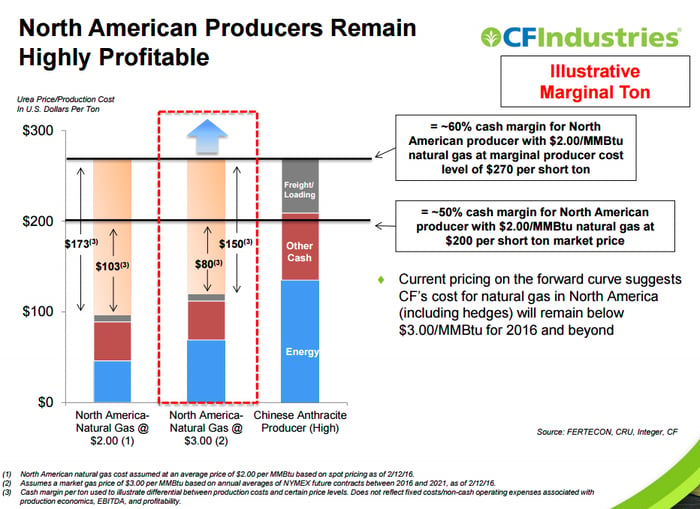 While the company isn't trading at a huge discount to its historical valuation, the company's large dividend increases in recent years have pushed its yield to a near high of 4%. That rate can look pretty appetizing when you're looking for a strong, sustainable yield.