Major earnings announcements are due out over the coming week, including from Netflix, Coca-Cola, and Starbucks. 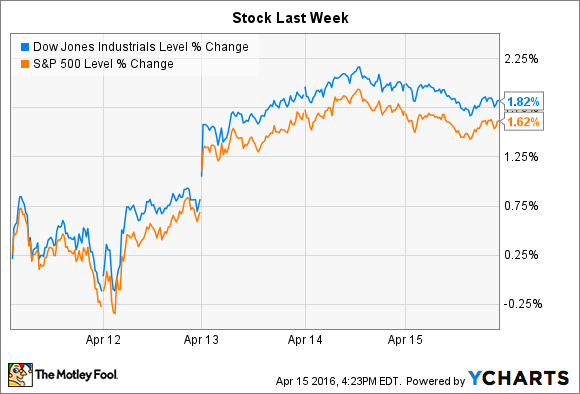 For the coming week, it's all about quarterly reports as Q1 earnings season reaches full swing. The next few trading days are stacked, with reports from Netflix (NFLX -1.46%), Coca-Cola (KO 3.35%), and Starbucks (SBUX 0.48%).

Monday, April 18 – Netflix's international member growth
Netflix's Q1 report, due out on Monday afternoon, is likely to be a tale of two markets. In the U.S., the streamer's most mature geography, subscriber growth is expected to rise by just 1.8 million users for a slowdown from the prior year's 2.3 million adds. "Our high penetration in the U.S. seems to be making net additions harder than in the past," CEO Reed Hastings told investors in January .

But overall net adds should accelerate sharply over the prior year (6.1 million vs. 4.9 million) thanks to the surging international streaming business that's projected to bring 4.4 million new members into the fold. Beyond subscriber growth, investors will be looking for evidence that newly launched markets are progressing toward profitability, meaning that international losses could peak in the next few quarters. Cash flow and profit margins will also be important metrics to watch on Monday afternoon.

Wednesday, April 20 – Coca Cola
Coca-Cola will release its earnings results before the opening bell on Wednesday, and Wall Street isn't expecting bubbly results from the beverage titan. Consensus estimates call for sales to drop 4% as profits decline to $0.59 per share from $0.63 per share a year ago.

In 2015, Coke's North American business managed its best results in three years and powered overall organic sales gains of 4%. While that was encouraging momentum, the growth was still held back by tiny gains in the sparking beverage portfolio including a 5% drop for the Diet Coke brand .

CEO Muhtar Kent and his executive team forecast a similar 4% organic growth pace for 2016, which should produce currency-neutral profit gains of about 5%. Shareholders will be listening for any update to that projection, along with details on Coke's huge refranchising initiative that promises to transform the company's sales and profit growth profile.

Thursday, April 21 – Starbucks
Everything seems to be going right for Starbucks heading into its earnings release on Thursday. Customer traffic spiked higher by 4% over the holidays, which allowed the coffee giant to serve 23 million additional customers in Q4 and powered an awesome 8% jump in comparable-store sales .

Meanwhile, Starbucks is creating a packaged goods business that's the envy of retailers around the world: That division grew sales by 16% -- and profits at an even faster pace – as customers snapped up K-Cup and Frappuccino and Double Shot drinks from dozens of sales points outside of Starbucks' store base. The channel development segment helped overall profit margin improve to 20% of sales from 19% a year ago.

Investors have rewarded that growth with a huge valuation premium, paying close to 40 times earnings to own a piece of this business. That raises the risk that Wall Street could be disappointed with results in any given quarter, but it also speaks to the huge runway for growth ahead for Starbucks, whether it's through increased food sales, home and office delivery, or aggressive expansion into emerging markets like China.