Please ensure Javascript is enabled for purposes of website accessibility
Log In Help Join The Motley Fool
Free Article Join Over 1 Million Premium Members And Get More In-Depth Stock Guidance and Research
By George Budwell - Apr 18, 2016 at 9:41AM

Although healthcare stocks have run into troubled waters in 2016, this group as a whole still holds immense potential for investors that can tolerate some short-term volatility. After all, the main catalysts that have been driving this sector higher over the last five years -- such as the aging populations of most Western countries and record rates of innovation among drugmakers -- haven't exactly gone away.

Armed with this insight, I think risk-tolerant investors may want to consider adding Acadia Pharmaceuticals (ACAD 1.66%), Celator Pharmaceuticals (NASDAQ: CPXX) and TransEnterix (ASXC 2.74%) to their portfolios right now. In a nutshell, each of these healthcare stocks has the potential to grow by leaps and bounds over the next few years, as they steadily transform into commercial operations. So, let's take a deeper look into their respective value propositions.

Acadia is banking on its novel Parkinson's disease drug
Acadia has bounced back in a big way after an advisory committee to the FDA voted in favor of approving the company's experimental drug Nuplazid as a treatment for Parkinson's disease psychosis, or PDP, last month. 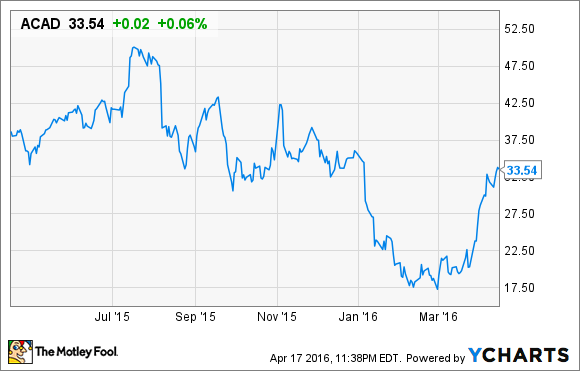 The long and short of it is that Nuplazid offers a jaw-dropping long-term value proposition for shareholders. While considerable debate exists over Nuplazid's peak sales potential, the fact remains that the Parkinson's disease market is enormous, with over 1 million Americans currently afflicted with the disease and another 9 million patients in ex-U.S. territories. As PDP occurs in approximately 20% of Parkinson's patients, according to industry experts, Nuplazid clearly has a sizable target market, implying that this experimental drug does indeed harbor megablockbuster potential.

Perhaps the best part is that Nuplazid could end up facing little competition for an extended period of time. If this drug is approved by the FDA and gets a relatively clean label in the process, analysts estimate that Nuplazid could dominate the PDP market for at least the next seven years -- given both the lack of experimental stage drugs under development for this particular indication and the black boxed warnings that come with some of the drugs presently used to treat PDP.

Looking ahead, investors will want to keep an eye out for the FDA's final decision on Nuplazid that's expected no later than May 1, along with the drug's label if approved. But barring any unforeseen even events on the regulatory front, I'm cautiously optimistic that Acadia's shares could surge higher due to the need for new treatment options for PDP and Nuplazid's potential to gobble up a nice chunk of this already large and growing market. 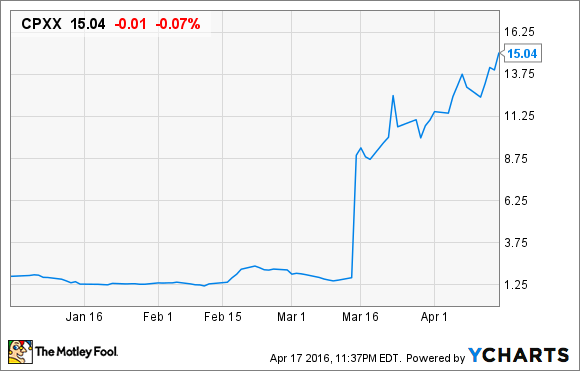 The key issue to understand is that Vyxeos stands to become the first major advancement in the treatment for AML in nearly three decades -- a disease that claims over 95% of lives of afflicted patients aged 65 or older. Although AML is a relatively rare form of cancer, industry experts estimate that the market for this orphan indication will grow to nearly $900 million in sales by 2020. So, with a market cap of less than $550 million at the time of writing, Celator would only need to capture perhaps a third of this growing market for Vyxeos to be a major value driver for the company moving forward.

Celator is in the process of putting together a regulatory filing for Vyxeos in the U.S., which could come as early as the third quarter of this year. The company is then expected to file for the drug's approval in Europe sometime in 2017. Based on the top-line data released thus far and the dire need for new therapeutic options for AML, Vyxeos seems to stand a fairly good chance at getting a green light from the FDA -- assuming there isn't a black swan hiding in the full data package that's to be presented to the FDA for approval.

The main downside risk with this stock thus appears to be the possible entry of game-changing adoptive cell therapies for blood-based cancers like AML down the road. That said, the earliest any of these competing therapies would hit the market would be late 2017, and that's a generous estimate -- meaning that Vyxeos should face little competition, if approved, in the near-term.

TransEnterix's stock is soaring on SurgiBot's regulatory filing
TransEnterix's shares have been going ballistic this year due to its regulatory application for SurgiBot -- a minimally invasive surgical platform that is expected to directly compete with Intuitive Surgical's blockbuster product, the da Vinci Surgical system, in the United States. 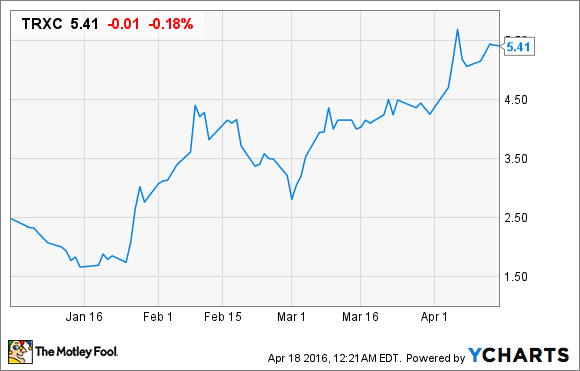 TransEnterix is hoping that a lower pricing point and more user-friendly features will allow it to rapidly capture market share from Intuitive's market-leading product.

The real thrust behind TransEnterix's recent surge, though, is the rampant speculation about the company being bought out by either Johnson & Johnson or Opko Health following SurgiBot's expected clearance by the FDA sometime in the next few days or weeks. The main impetus behind these rumors is the fact that the robotic surgery space is forecast to grow to a staggering $20 billion by 2021 .

Adding fuel to the fire, J&J recently announced that it plans on restructuring its medical device business to focus on higher growth areas of the market like robotic surgery, implying that it could be interested in fast-tracking this process by acquiring an up and coming company like TransEnterix.

Opko, for its part, has been linked to a possible buyout of TransEnterix primarily through its CEO Phillip Frost -- who also happens to be a major shareholder and former director of TransEnterix, and has a well-documented history of going the M&A route to create shareholder value.

Because a substantial amount of TransEnterix's current value seems to be predicated on a buyout, I find this stock to be somewhat risky for my taste. After all, TransEnterix may have a tough time beating out Intuitive for market share due to the underlying dynamics of the robotic surgery market (high upfront and maintenance costs for hospitals making it hard to switch to another system) -- not to mention TransEnterix's need to raise a highly skilled sales force with limited resources.

Are any of these stocks worth buying right now?
I think both Acadia and Celator easily have more room to run in light of the commercial potential of their lead product candidates relative to their respective market caps. TransEnterix, on the other hand, is probably going to need a buyout to drive its shares much higher as a result of the immense demands of commercializing a robotic surgery product. Furthermore, I'm not entirely sold on the idea that either J&J or Opko are waiting in the wings to buy TransEnterix. After all, J&J has formed a joint venture in order to develop its own line of robotic surgery products, and Opko may not have the resources available after its New Drug Application for Rayaldee was recently bounced back by the FDA.