Our contributors think these five stocks are great choices for investors in their golden years.

Investors who are in or nearing retirement have a tendency to get overly conservative with their investment choices, bulking up on many safe but low-return investment vehicles like cash, CDs, and Treasury bonds. That's a fine strategy for any money that will be needed over the next five years, but given that retirees are living longer than ever, they should also consider adding a few well-chosen stocks to the long-term portion of their portfolio to better keep up with inflation.

With that in mind, we reached out to a team of Motley Fool contributors and asked them to share a stock they think is a solid choice for a retiree right now. Read below to see which companies they highlighted.

Dan Caplinger
Tobacco giant Philip Morris International (PM -3.58%) has a lot to offer retirees. A dividend yield of more than 4% provides valuable income for those looking to cover their living expenses from their investments, and over time, Philip Morris has given shareholders regular boosts in the payouts they receive. The stock has performed well even through tough economic times in many overseas markets, speaking to the loyalty Marlboro customers have for the brand.

Now is an interesting time to look at Philip Morris because one of the key headwinds that have held back the company appears to be letting up. The strong dollar has crushed the multinational player in recent years, turning what would have been sales growth in local-currency terms into top-line declines and putting pressure on profits. In recent months, however, many key currencies have bottomed out and even gained ground against the U.S. dollar. Philip Morris has said that once dollar-related pressure disappears, it will be in a better position to reinstitute stock buybacks and give investors more lucrative dividend increases. That will be especially good news for retirees, and when it comes, it could send the stock even further into uncharted record territory.

Tyler Crowe
Having that stock that can provide you with big dividend checks and not need to sell off your principal to get income is a wonderful thing. With a distribution yield of 6.4% today, Enterprise Products Partners (EPD -0.25%) is one of those stocks.

The first thing to understand about Enterprise is that unlike so many other companies in the oil and gas industry, its pipeline & processing business is mostly insulated from the ups and downs of commodity prices. Rather, its business is mostly tied to the total volumes of crude oil and natural gas liquids that are moving through its system. Also, unlike some of Enterprise's peers in this special subset of the industry, the company's management has been much more prudent about balancing growth spending and balance sheet strength. So, while many other companies have been forced to cut payouts to lower debt or pay for new projects, Enterprise has been able to raise its distribution like clockwork since it had its IPO in 1998. 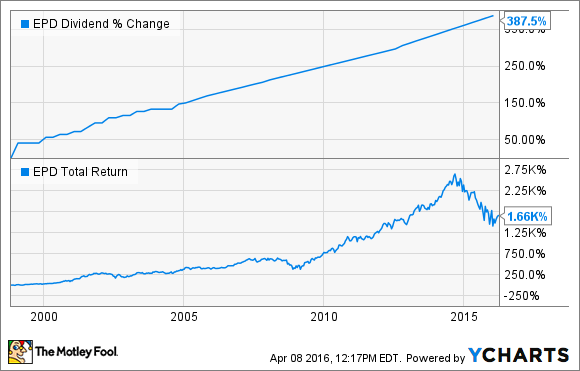 The company's share price has taken a bit of a hit since oil and gas prices have started to decline, but the company has churned out cash flow just as well as before the oil downturn. So, if investors are willing to look beyond the recent decline in share price and focus instead on the great income-generating possibilities right now, Enterprise is a stock that needs to be on your radar.

Brian Feroldi
At first glance, suggesting that a fast-growing restaurant company could be a good choice for a retiree might strike you as a bit odd, but Texas Roadhouse (TXRH -1.99%) isn't just any old restaurant.

The company's metrics from last quarter are simply mouthwatering: Revenue was up 12%, net income jumped 24%, restaurant margins were up 112 basis points, and same-store sales grew 4.5% at company-owned stores. Amazingly, that was the 24th quarter in a row that comps increased, which is a testament to just how well-run this company is.

The year ahead should be another good one as management has plans to open 30 new stores -- seven of which are in its new Bubba 33 restaurant concept -- a healthy increase over the 485 stores it operated at year end. If the company can continue to grow its comps by mid single digits, then revenue and profits should again grow by double-digits, and since management believes the U.S. alone could support at least 700 stores, there is still plenty of room to grow.

Beyond the growth, one reason retirees should warm up to Texas Roadhouse is that it offers growth and income. The company initiated a dividend in 2011 and has grown it every year since. Its current annual dividend of $0.68 gives its shares a yield of 1.7%, which is destined to grow quickly over time.

Texas Roadhouse is a rare company that offers investors fast growth and income. That's a combination any retiree should love.

Evan Niu, CFA
One of my favorite income-oriented positions (that I currently have a large position in) that would be a great fit for retirees is BlackRock Enhanced Capital and Income (CII -0.66%). It's an indexed ETF with a twist: It boosts the yield by using a strategy of selling call options on equity indexes. The fund primarily sells calls against the S&P 500, but those premiums that it brings it substantially increase its distribution yield, which is currently sitting at an impressive 8.9%.

On top of that, CII distributes its payout on a monthly basis instead of a quarterly basis (currently $0.10 per share per month), that means if you have that generous yield set to reinvest, you'll enjoy the benefit of greater compounding.

To be clear, since CII writes call options that, by definition, limit upside in the event the market rallies, the fund is unlikely to outperform during bull markets. So CII is not a capital appreciation play; it's an income investment. For these reasons, you shouldn't expect CII to outperform, but what you can expect is a a hefty and reliable distribution yield.

Sean Williams
Retirees want the best of both worlds -- the ability to have their investment appreciate in value and deliver income, while at the same time not risking much of their capital in the process. Finding companies that fit the bill is easier said than done, but one that stands out time and again for me is U.S. pharmacy and pharmacy-benefits management giant CVS Health (CVS -1.66%).

CVS Health holds what I believe are three major advantages for today's retirees.

Even with the merger between competitors Walgreens Boots Alliance (WBA -0.47%) and Rite Aid (RAD -2.17%), which is designed to give CVS a run for its money, CVS will retain close to 60% pharmacy/drugstore market share in the U.S., and it could gain even more if Walgreens Boots Alliance struggles to put Rite Aid's somewhat unpopular brand in the rearview mirror. Having dominant market share affords CVS the ability to play with its pricing and loyalty programs to lure in new customers and retain existing customers.

CVS Health is also a play on two major demographic shifts: the retirement of baby boomers and an increasing life expectancy. As Obamacare has lowered the rate of uninsured Americans, the presumption is that more people are getting preventative care. In turn, this should translate into more opportunities for CVS Health to capitalize by filling prescriptions and selling discretionary front-end healthcare products.

A solid long-term business model and a 1.6% yield is what retirees would get with CVS Health.