The action camera leader achieved something of a hiring coup in luring away an Apple design veteran. However, investors should temper their enthusiasm over the move's potential impact.

Adding a designer from one of the world's most esteemed mass market design operations is indeed a coup for GoPro, one that could have a very positive influence on future products. However, given GoPro stock's 19% spike on news of the hiring, investors should also realize that the company's problems run far deeper than the powers of a single Apple designer.

A rare defection
The move comes as a genuine win for GoPro, which needs a bit of positive news as badly as any company these days. Facing multiple headwinds, the stock was down more than 50% from its frothy IPO pricing in 2014. 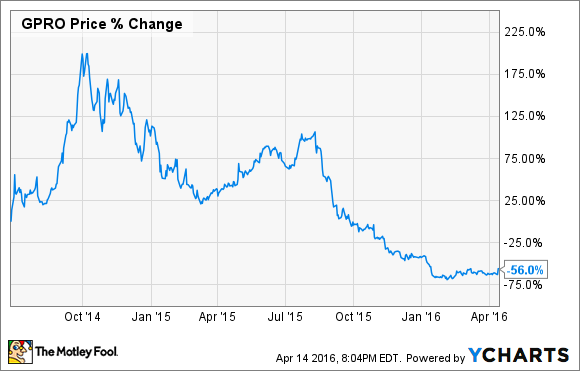 In Coster, GoPro and its CEO Nick Woodman have secured someone whose fingerprints are featured prominently throughout many of Apple's most popular products of the past two decades, including the all-important iPhone. According to the GoPro press release, Coster will help lead design across the company's hardware and software initiatives.

At the same time, it isn't clear whether, or to what degree, Coster's departure will affect Apple's in-house design team. Media portrayals typically depict the group as small and tight-knit with notably low turnover. As such, it's unclear whether Coster's decision to leave Apple reflects any kind of uneasiness within Apple's own design department, especially given its burgeoning product portfolio, or a change in ambitions for Coster alone. Regardless, this move indisputably benefits GoPro, though the company still faces more fundamental issues as well.

Still not enough
In the grand scheme of the company's ongoing prospects, Coster's hire still doesn't address some of the more fundamental issues the company faces. I see two core problems GoPro must deal with, or at least sufficiently manage, in order to become a long-term viable consumer electronics company.

The first is commoditization. Like so many hardware industries before it, GoPro has been undoubtedly affected by the raft of competing products that have flooded the market in recent years.

The company's solution to this is to try to create a hardware-software ecosystem powered by its forthcoming video and image editing software. While plausible, GoPro hasn't demonstrated any special historical ability in developing application software, a fact the company discloses as a risk factor in its SEC filings.

Will the editing software due this year prove compelling enough to justify the company's relatively expensive capture devices? Coster's design expertise probably increases the odds of success for GoPro here. However, as a mission critical agenda for the company, its relative lack of experience in executing software products certainly looms large in my eyes.

The second problem potentially weighing on GoPro's results is the replacement cycle of its devices. Consumers tend to refresh their smartphones once every few years. Analysts have argued that this leads to an annuity-like business model for Apple. However, key structural differences between the smartphone market and action camera market might make the same dynamic less plausible for GoPro.

Market features like handset subsidies, and the simple fact that smartphones are often the most regularly used device for many consumers, help support relatively tight refresh cycles. However, can the same be expected of GoPro's capture devices? The year-over-year fourth quarter contraction in device sales for GoPro last year paints a bearish picture.

Ongoing hardware and software innovation can go a long way to mitigate these risks, although I still see problems with replacement cycles. Apple's ability to consistently produce new, leading products in each of its device categories has been the antidote to the problems often faced by its hardware-centric business model.

However, the key differences between Apple and GoPro cited above are bigger than just a single new hire. So while GoPro and its shareholders should be rightly excited about Coster, a single person is unlikely to fix some of the more-concerning aspects of GoPro's business model.