Please ensure Javascript is enabled for purposes of website accessibility
Log In Help Join The Motley Fool
Free Article Join Over 1 Million Premium Members And Get More In-Depth Stock Guidance and Research
By Tim Brugger - Apr 19, 2016 at 11:51AM

In today’s low-growth environment, finding undervalued, solid dividend-paying stocks isn’t difficult. But which are worth a second look?

Change is one of the few constants in tech. For some companies, change is an opportunity to be seized, though it takes time to institute significant transformations. Short-term investors and pundits will often punish companies in situations like this, resulting in a rough patch for shareholders. But for investors in search of value, particularly long-term growth opportunities with a solid dividend yield, rapidly changing market dynamics can be a godsend.

That's the case for tech-industry behemoths Intel (INTC 2.46%), IBM (IBM 1.74%), and Microsoft (MSFT 2.76%). Despite their differences in the marketplace, these companies share a number of attributes. Each is in the midst of major business shifts, which has led to relatively undervalued stock prices, and all reward shareholders with excellent dividends.

The case for Intel
With 2016 Q1 earnings scheduled for release on April 19, there are a few areas worth noting. CEO Brian Krzanich is working to bring Intel into the 21st century, which means moving beyond its longtime reliance on the PC market. Good thing, too, following the news that calendar Q1's PC sales suffered an estimated 9.6% nosedive.

What investors are beginning to recognize is that Intel's future will be determined by its cloud-based data-center sales, growth in its Internet of Things (IoT) business, and its ability to make inroads in the wearables market. Though its wearables market is still emerging, Intel is knocking its data-center and IoT sales out of the park.

The case for IBM
Big Blue released earnings Monday and, as expected, its legacy hardware and PC-related sales take a back seat to its "strategic imperatives." This group of forward-thinking solutions targets the cloud, IoT, big data, and machine learning markets, each estimated to become $100 billion-plus opportunities.

How cheap is IBM stock? Despite jumping nearly 13% in value in the past three months, IBM is still trading at a minuscule 10 times future earnings. This, added to its 3.6% dividend yield, means IBM belongs on any list of cheap dividend-paying stocks. 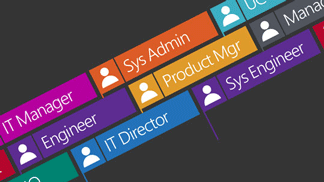 The case for Microsoft
Like IBM, Microsoft has gone full steam ahead in its efforts to win the cloud war. What gives Microsoft an advantage over many cloud players (and why it's already nearing an annual run rate of $9.5 billion in sales), is its focus on selling software-as-a-service (SaaS) delivered via the cloud.

Managed cloud services are forecast to reach a whopping $256 billion in revenue in just two years. With Office 365, Dynamics CRM, and the Azure cloud platform, Microsoft is well-placed to take advantage of this. One analyst suggests that by 2018, those three SaaS and platform products alone will equal 30% of Microsoft's total revenue. To put that into perspective, last fiscal year Microsoft generated $93.6 billion in sales, of which, 11% was derived from its SaaS and cloud platform products.

Unlike Intel and IBM, income investors looking for value might see Microsoft's current valuation as measured by its price-earnings (P/E) ratio and think, "How is that cheap?" But looking ahead, Microsoft is expected to grow so rapidly that on a forward basis, its stock is trading at just 18 times future earnings -- less than half of today's 39 P/E figure. And, with its solid 2.6% dividend yield, Microsoft joins Intel and IBM as high-paying dividend stocks investors can get on the cheap.