Please ensure Javascript is enabled for purposes of website accessibility
Log In Help Join The Motley Fool
Free Article Join Over 1 Million Premium Members And Get More In-Depth Stock Guidance and Research
By Travis Hoium - Apr 22, 2016 at 11:14AM

Is one of the world's largest solar manufacturers a good buy for investors?

Canadian Solar (CSIQ 5.08%) has taken the path of a lot of other Chinese solar panel manufacturers. It got a ton of money from Chinese banks to build out massive amounts of solar capacity, struggled when panel prices dropped, and now is trying to transition to a business model of building more complete systems.

In theory, that's the correct path to long-term profitability in solar. But is it enough to make the stock a buy?

Don't get blinded by financial metrics
A quick look at Canadian Solar, and you might be blown away by the value. Shares trade at just 6 times trailing earnings, and that's in a solar market that should have decades of growth ahead. But there were some tailwinds that won't drive the company in the future.

While most of the company's manufacturing is in China, it does have a manufacturing and operational presence in Canada as well. That allowed it to qualify to build Canadian projects in recent years, which were very lucrative. Early last year, Canadian Solar was selling Canadian projects for C$6.22 per watt, well in excess of what market prices were for utility-scale projects.

In other words, past projects had very high values and margins because they were highly subsidized and Canadian Solar had little competition for bids. But future projects will be less valuable and lower margin. That's why the P/E ratio may not tell the whole story.

Making the right moves in solar
The Canadian windfall may be almost over, but that doesn't negate the positive moves the company has made to become a more vertically integrated solar company. It bought Recurrent Energy from Sharp last year, adding 4 GW to its pipeline, and is now one of the top project developers in North America.

It's become clear in recent years that vertical integration into project development is going to be a necessary step for solar panel manufacturers. Canadian Solar makes what's effectively a commodity solar panel, so it's competing primarily on price with dozens of other manufacturers. That's a recipe for low margins and even financial collapse, as LDK Solar, Suntech Power, and recently Yingli Green Energy have shown.

But if you can create your own demand for solar panels by developing projects, it will keep plants busy and bring in higher gross margins. Strategically, becoming a world-class project developer is the right move for Canadian Solar.

Is Canadian Solar a buy?
The windfall profits of 2014 and 2015 will fade, but even without that, Canadian Solar should see gross margins stabilize near 20% and should remain solidly profitable as the solar industry grows. The trouble is, predicting exactly where long-term profits will land is impossible given the rapidly changing industry. 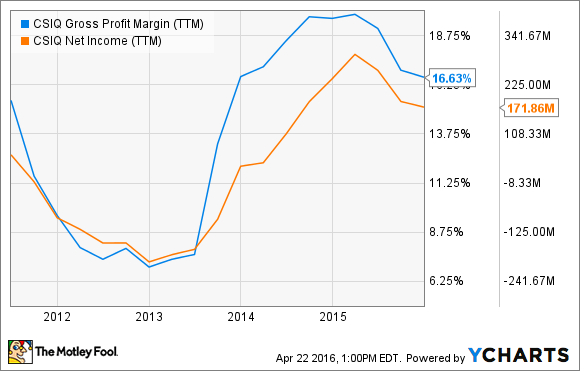 What we do know is that the booming utility-scale solar business around the world will lead to growing demand for panels and opportunities for Recurrent Energy to develop (hopefully) high-margin projects. It'll be a volatile road ahead, as it has been for the past five years, but Canadian Solar is well positioned in solar, and with a market cap of just over $1 billion, there's lots of value left to be unlocked for investors.