It didn't take much for Schlumberger to beat expectations this quarter, which is good, because the results weren't that great anyway.

If we were to evaluate Schlumberger (SLB 0.66%) at almost any other point in time, this past quarter's results wouldn't look too impressive. After seven straight quarters of declining revenue, though, Wall Street didn't have very high expectations coming into the quarter. The company's per share earnings were down more than 47% from the same time last year, and even that quarter was considered a weak one. Yet those modest results were enough to jump over Wall Street's low hurdle.

Let's take a look at Schlumberger's earnings for the quarter and why the company foresees even harder times ahead.

By the numbers
Even though we have started to see oil prices decline, the same cannot be said for drilling activity and overall spending in the oil patch. Schlumberger's first-quarter revenue came in at $6.5 billion, a 36% decline from the same quarter last year and down 16% from the prior quarter. Like the quarters before it, the largest declines came in North America, where total revenue declined a whopping 55% and swung into a loss for the first time since the downturn began. Luckily for Schlumberger, its continued strength in places such as the Middle East and Asia helped to keep the company somewhat profitable with earnings coming in at $0.40 per share. Despite this rather weak result, it still beat the consensus estimate compiled by S&P Capital IQ of $0.38 per share.

Here's a quick breakdown of the company's earnings by geographic segment that shows how the company's more diverse revenue stream has really helped it weather the storm relatively well, all things considered. 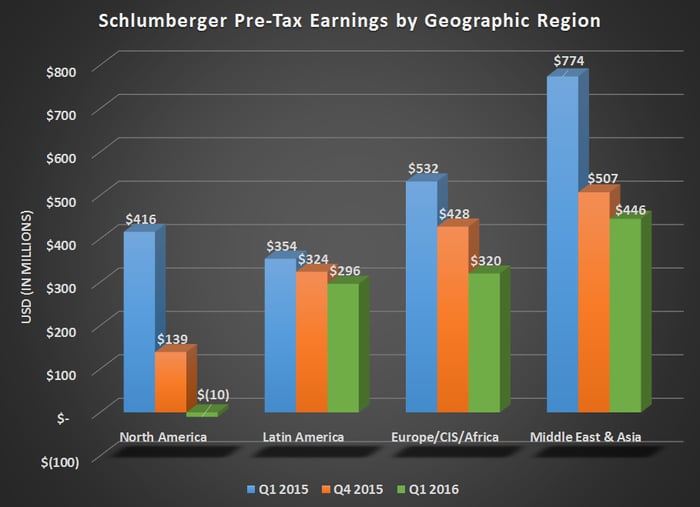 For the quarter, pre-tax operating margins were a much more modest 13.8%. Certainly margins like this are a sharp decline compared to the 19.4% operational margin Schlumberger was making in the same quarter last year, but it's still well ahead of its most direct competitors, Halliburton (HAL 1.77%), Baker Hughes (BHI), and Weatherford International (NYSE: WFT).

While these other three have not yet reported first-quarter earnings, it's not too much of a stretch to say that operational margins will decline from the prior quarter like Schlumberger's have as a result from the decline in drilling activity.

Another thing to consider is that Halliburton and Baker Hughes have a much larger exposure to North America than Schlumberger, so don't be surprised if results from these two are even weaker because of the brutal market in the U.S.

It's rough out there, folks
Schlumberger has been around for a while and has seen its fair share of ups and downs in the oil and gas industry. Ever since the beginning of the downturn, Schlumberger CEO Paal Kibsgaard has pointed out that the company has been through these types of market cycles before and has avoided using too much hyperbole when explaining the company's results. This quarter, though, Kibsgaard was much more vocal about how bad this downturn has been:

[T]he decline in global activity and the rate of activity disruption reached unprecedented levels as the industry displayed clear signs of operating in a full-scale cash crisis. Budgeted E&P spend fell again and substantially affected our operating results. This environment is expected to continue deteriorating over the coming quarter given the magnitude and erratic nature of the disruptions in activity.

This is something to keep in mind as we have seen oil and gas prices rise recently to the $45 per barrel level. While this may be a slight relief for producers, it still isn't enough to incentivize spending in the oil patch. Also, many companies need to repair the damage done to their balance sheets before they will be able to do much more spending. So, oil services providers such as Schlumberger and Halliburton may not as quickly recover recover from this downturn.

What a Fool believes
Schlumberger has been managing a pretty careful balancing act of preserving both profitability and market share, and so far, it has done a decent job of it. The company has continued to keep its operating margins well above its peers while not ceding too much ground in critical overseas markets. Now that Schlumberger has completed the acquisition of Cameron, we'll start to see what kind of cost cuts and product offerings the company can make to improve its already market-leading position in offshore drilling services.

The market certainly isn't doing Schlumberger or its peers any favors as of late, and it looks like we could see even more pain in the next couple of quarters. However, if the company continues to generate peer leading margins and not cede too much market share through deeper cuts, then Schlumberger should be able to escape this oil and gas downturn in much better shape than others.