Please ensure Javascript is enabled for purposes of website accessibility
Log In Help Join The Motley Fool
Free Article Join Over 1 Million Premium Members And Get More In-Depth Stock Guidance and Research
By Alex Dumortier, CFA - Apr 23, 2016 at 9:20AM

BP plc CEO Bob Dudley's total remuneration rose 20% in 2015, a year that produced a record loss at the company. BP shareholders deserve better than that.

It's now clear that BP plc (BP 0.81%) caused a furor when it disclosed that CEO Bob Dudley's total compensation for 2015 rose 20% to $19.6 million in a year in which the company suffered a record net loss of $6.5 billion. Last week, shareholders made their discontent known, with over 59% of proxy votes rejecting the package (the vote is, however, non-binding).

59% may not sound like an overwhelming majority, but that figure is a stinging rebuke to BP's board. As the Financial Times' Brooke Masters remarked, the only "say-on-pay" vote that elicited a worse result "was in 2009, when shareholders in part-nationalised Royal Bank of Scotland slammed the decision to pay a GBP 703,000 annual pension to Fred Goodwin, the man who drove the bank into the ground." Say-on-pay votes were introduced in the U.K. in 2002. 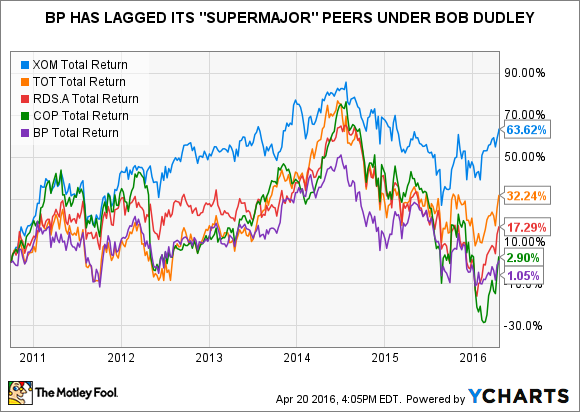 As you can see, BP is the pack laggard, with a total return over the full period of just 2.90% (in other words, after inflation, the stock was a loser).

Incidentally, perhaps you're wondering why I restricted the comparison to these four companies? That's the peer group against which BP compares its total shareholder return and reserves replacement ratio to determine part of the performance share component of Dudley's compensation.

Note that if we were to include Chevron Corporation and Eni SpA, which may also be considered "majors," the result doesn't change much: Eni underperformed BP by less than three percentage points; Chevron, on the other hand, is just behind leader ExxonMobil, with a total return of 52.9%.

Now, you may counter that the CEO doesn't control the stock price, which may not always accurately reflect the company's fundamentals. Both are accurate observations, but Dudley has been in the top job for over five-and-a-half years, which is starting to be a meaningful period over which stock performance cannot be ignored.

Three years is too short
In fact, that critique is better leveled at BP's remuneration committee: Although BP claims "variable remuneration is primarily based on true underlying performance and not driven by factors over which the executives have no control," relative total shareholder return is measured over just a three-year period. That measure represents one-third of the award under the long-term performance share plan.

One of the best critiques of this formula-based approach comes courtesy of one of BP's competitors, ExxonMobil, in its 2015 Executive Compensation Overview:

Some shareholders have suggested that ExxonMobil consider a formula-based methodology based on three-year TSR [total shareholder return] versus the industry. While this approach may be appropriate for the business model of other companies with shorter investment horizons, ... [t]he Committee concluded that the leverage inherent in formula-based methods, such as this example, could encourage a focus on short-term results at the expense of long-term sustainable growth in shareholder value. Furthermore, this steep leverage does not reinforce the critical importance of sustainable risk management strategies; the current ExxonMobil program achieves this objective with much longer payout periods.

Take ExxonMobil, for example
So, what is ExxonMobil's alternative? A heavier focus on fundamentals:

[A] majority of our compensation benchmark companies and industry comparators use short-term TSR as a metric in their formula-based pay. While TSR is the ultimate outcome, the Compensation Committee puts equal emphasis on the inputs controlled by management that drive superior relative TSR over time such as capital efficiency and the other metrics shown in chart 14.

[Note: The other metrics include return on capital employed, free cash flow, shareholder distributions, safety and operations integrity ... and TSR.]

ExxonMobil CEO Rex Tillerson's compensation declined 18% in 2015 -- which seems more in keeping with the company's results in a year in which profits halved.

As far as BP goes, I understand the argument that a good remuneration policy will attempt to reward its chief executive on the basis of things that are within his control, but that does not imply that it must also protect them against all vagaries that occur in the industry in which they operate (such as a collapse in the oil price).

It's time for BP to evolve
In conclusion to the "Strategy performance and pay" section of BP's 2015 Annual Report, remuneration committee chair Anne Dowling writes that "there remain challenging times with an evolving remuneration landscape." BP has committed to a full review of the remuneration policy this year, and to this effect, Dame Dowling has met or will meet with "key shareholders."

She should expect those meetings to be "challenging," as institutional shareholders demand that the executive remuneration policy evolve with the landscape.