Please ensure Javascript is enabled for purposes of website accessibility
Log In Help Join The Motley Fool
Free Article Join Over 1 Million Premium Members And Get More In-Depth Stock Guidance and Research
By John Maxfield - Apr 23, 2016 at 10:40AM

If you look at the bank industry today, there is a clear divide between the biggest banks in America and their smaller (and often simpler) counterparts. Included in the former group are JPMorgan Chase (JPM -0.70%), Bank of America (BAC -1.02%), Wells Fargo (WFC -1.01%), and Citigroup (C -0.38%), which exercise control over a combined $8.2 trillion worth of assets.

It's easy to think that America's biggest banks have always loomed large over the financial industry. But the reality is that megabanks that stretch across the United States are a relatively recent phenomenon.

Three decades ago, banks were largely prohibited from opening multiple branches and operating across state lines unless the state in which they were incorporated permitted them to do so. All of this changed when the trend toward deregulation climaxed in the 1990s, leading to federal legislation that opened up the doors to branch, interstate, and universal banking.

This set off a series of mergers between large regional banks spawning the banking behemoths we know today. North Carolina's NationsBank merged with Bank of America in 1998, creating the first coast-to-coast branch network in the United States. Minnesota's Norwest merged with California's Wells Fargo the same year. Citigroup and Travelers Group combined in 1998 as well, auguring in universal banks -- i.e., firms with both investment and commercial banking operations. And in 2000, Chase bought JPMorgan to form JPMorgan Chase. 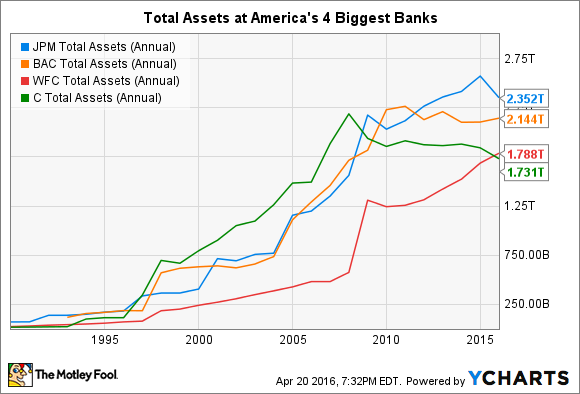 Ironically, given the backlash against too-big-to-fail banks, the financial crisis accelerated consolidation in the industry. It paved the way for Wells Fargo's acquisition of Wachovia, which more than doubled Wells Fargo's size. It gave JPMorgan Chase the opportunity to acquire Bear Stearns and Washington Mutual. And it positioned Bank of America to purchase Merrill Lynch and, regrettably, Countrywide Financial.

The only big bank that didn't grow as a result of the crisis was Citigroup. While it was originally the lead bidder to acquire Wachovia prior to Wells Fargo's belated bid to do so, Citigroup has since gone from being the biggest bank in America on the eve of the crisis to the fourth biggest bank. It was eclipsed most recently by Wells Fargo.

The net result is that the four biggest banks in America now control 42% of the industry's assets. That may seem like a lot, but when you consider that America's biggest bank, JPMorgan Chase, is only the seventh biggest bank in the world, you'd be excused for thinking that the whole concern about too-big-to-fail banks in the United States is more of a tempest in a teapot than an actual problem.