Please ensure Javascript is enabled for purposes of website accessibility
Log In Help Join The Motley Fool
Free Article Join Over 1 Million Premium Members And Get More In-Depth Stock Guidance and Research
By Daniel Miller - Apr 23, 2016 at 8:10AM

Peak auto sales, increasing competition and a cyclical industry are all concerns, but until automakers learn where Washington is going to set the fuel-economy bar, investors should be wary.

Let's address the elephant in the room for investors, or potential investors, of major automakers -- especially Detroit's Ford Motor Co. (F 0.55%), General Motors (GM 0.81%) and Fiat Chrysler Automobiles (FCAU), which derive most of their profits from SUVs and trucks. The problematic pachyderm isn't peak auto sales -- though many consider the likelihood that we've hit that peak a deterrent from owning automaker stocks now. Rather, it's the looming increase in the Corporate Average Fuel Economy (CAFE) requirement. Currently, U.S. regulations call for automakers to achieve a fleet-wide average of 54.5 miles per gallon in their 2025 model year vehicles. That figure is a bit inflated compared to the standard mpg we're familiar with; the adjusted "real-world" average of that requirement would equate to a 40 mpg on the vehicle's Monroney window sticker.

That 40 mpg target is still a high figure for automakers to hit, especially given that consumers' love affair with full-size trucks and SUVs continues to accelerate. Let's take a look at the details, and why this could be a concern to investors.

What's the problem?
The CAFE standard was enacted by Congress in 1975 as a way to reduce energy consumption by increasing the fuel economy of cars and light trucks on American roads. In 2012, the National Highway Traffic Safety Administration (NHTSA) and the Environmental Protection Agency issued increased standards requiring automakers to further improve fuel economy and reduce greenhouse gas emissions, which was a cornerstone of the Obama administration's plan to combat climate change. In recent years, the standard has helped drive fuel economy higher, and quickly. 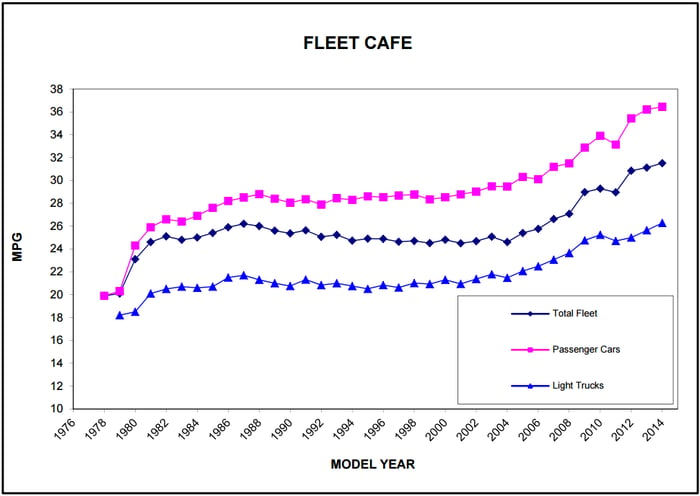 CAFE standards absolutely serve a great purpose, but this increase comes at a problematic time for automakers. Between the significant declines in the price of gasoline in recent years and the improvements in fuel economy for larger vehicles, this is a tough environment for alternative-powered vehicles to gain mainstream consumer attention. Sales of alternative-powered vehicles have stagnated in recent years, and their market share has receded from its highs. 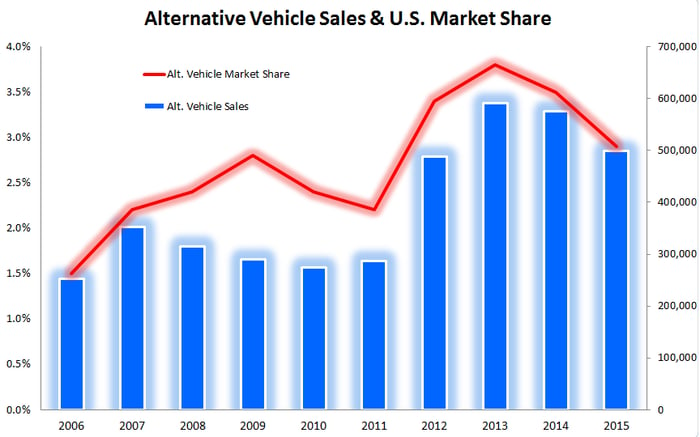 What's going to happen?
This situation reminds me of an old marketing saying: "You can't push a string." While CAFE standards can definitely push automakers to innovate and invest in R&D to meet lofty mileage targets, they can't force consumers to pay a premium for the cars that result from those efforts. At a time when SUVs are red-hot, and gas prices remain cheap, the demand for hybrid and electric vehicles just isn't there.

With that setting the scenario's context, June's meeting -- with the EPA, NHTSA and the California Air Resources board -- for the CAFE midterm review will set the table for a proposed standards rule in 2017 and a final decision by April 1, 2018. Basically, it's a meeting to determine whether or not the standards set in 2012 are still appropriate, which should be an interesting discussion. It's extremely difficult to predict what's going to happen given the array of constituencies pushing and pulling at this situation: the federal government, state governments, automakers and consumers. That's in addition to the 2016 elections, the result of which will certainly influence the standards in one way or another, given the widely differing views the parties hold on the need to address climate change.

Regardless of the outcome of that upcoming meeting, Ford and GM have made it very clear they are on the alternative-powered vehicle bandwagon. Their research and development into hybrid, diesel and electric vehicles shows they see that change in the automotive industry is inevitable.

Unfortunately for investors, with cheap gas making larger vehicles more popular, the current CAFE standards are a hurdle that will constrain automakers' design, production, and R&D choices over the next decade. Not to mention, they could jeopardize the sales emphasis on Detroit automakers' most valuable products, which generate a majority of its profits: SUVs and full-size trucks. Until we learn more in June, this will remain the elephant in the room, and a significant risk to factor into your automaker investing thesis.