Please ensure Javascript is enabled for purposes of website accessibility
Log In Help Join The Motley Fool
Free Article Join Over 1 Million Premium Members And Get More In-Depth Stock Guidance and Research
By Sean Williams - Apr 25, 2016 at 8:03AM

This has certainly gone down as one of the wildest years on record for the stock market as a whole. The first two-week period marked the worst performance of U.S. indexes in recorded history. We followed that by staging one of the most voracious quarterly comebacks in decades.

But the smartest investors understand that the best chance they have to generate inflation-topping wealth over the long run is to buy high-quality stocks and hang onto them over the long-term. Based on data from Yardeni Research, the S&P 500 has undergone 35 corrections of at least 10% since 1950, and in each and every instance the index has completely erased the drop. Sure, it can take weeks, months, or even years to recoup losses from a downswing in the stock market, but investors who've held onto companies with solid business models over long periods of time have often outperformed short-term investors who are trying to time the market.

15 reasons to buy Visa and never sell
The biggest issue is locating these so-called "high-quality stocks," because they're not exactly something you'll find under every unturned stone. One company that just might fit the bill is payment processing facilitator Visa (V 0.60%). In fact, it could be argued that the following 15 reasons to buy Visa may make you never want to sell.

1. High barrier to entry
One of the biggest selling points of Visa is that there's well-defined, but minimal competition when it comes to payment process facilitation. Visa, MasterCard, American Express, and Discover Financial Services make up the lion's share of the market, primarily because the cost to lay the groundwork (i.e., infrastructure) can be quite expensive.

2. Leading market share
Among the four major credit card networks, Visa is the market share kingpin. In 2014, Visa's $1.2 trillion in purchase volume on its networks was nearly as much as AmEx, MasterCard, and Discover's combined purchase volume ($1.4 trillion). Having the highest market share means it's easily recognizable by consumers and is often the premier choice of merchants and credit cardholders.

3. No lending risk
Two of Visa's biggest rivals, American Express and Discover, are able to double-dip -- they earn fees through merchant transactions, but they also act as credit lenders. The downside is when the economy contracts, credit delinquencies often rise, potentially hurting both companies. Visa and its main rival MasterCard have no lending risk, so a rise in delinquencies isn't necessarily a big concern.

5. Large untapped international market
According to MasterCard CFO Martina Hund-Mejean, 85% of global transactions are still being conducted in cash. This means a large untapped opportunity for Visa to expand its business over the coming decades. Regions of opportunity include Africa, the Middle East, and Southeastern Asia.

6. Consistency
History may be no guarantee of future results, but it's hard to argue against Visa's growth over the past decade. Revenue has grown by a double-digit percentage in all but two years, and based on Wall Street's estimate of $14.9 billion in revenue this year, Visa will quintuple its top line since 2006 if it manages to hit that mark.

7. Operating margin
Because of Visa's commanding market share, its countless merchant partners, and its geographic diversity, its operating margin is among the highest of any megacap companies. Over the trailing 12-month period, Visa's operating margin is nearly 66%, which is more than double the industry average of 28% for credit services. In simpler terms, Visa is getting more bang for its buck.

8. Free cash flow
Having a high operating margin also means Visa tends to generate substantial free cash flow, which can further build up its current net cash position. In 2015, Visa generated nearly $6.2 billion in FCF, which allows it the flexibility to boost shareholder yield or take on other business ventures (which we'll get to shortly). 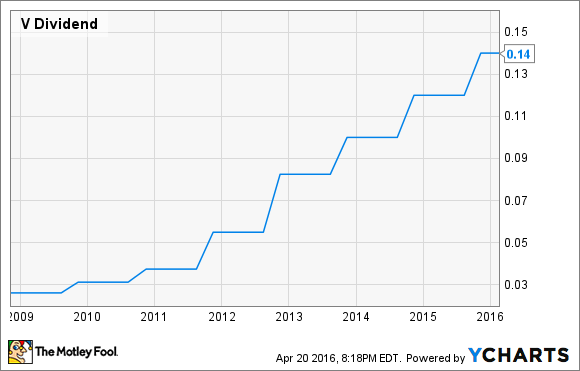 9. Dividend growth
A good example of what solid FCF generation can do can be seen in Visa's dividend growth since 2008, when it first introduced a quarterly stipend. Adjusted for its split, Visa had been paying just under $0.03 per quarter. Today, Visa is paying $0.14 per quarter, meaning it almost quintupled in a span of eight years.

10. Payout ratio
Visa's current yield of 0.7% may not seem like much to write home about, but its payout ratio is suggestive that there's plenty of room for it to become a dividend juggernaut of the future. Based on the $2.80 it's expected to earn in full-year EPS, this year's payout ratio is a mere 20%. Most Dow Jones Industrial Average components typically target payouts or around 50% or even higher, so I'd anticipate consistently strong dividend growth moving forward.

11. Share buybacks
On top of rewarding its investors with a money-in-hand dividend policy, Visa is also very active when it comes to repurchasing its own common stock. Last year, Visa's board authorized a $5 billion share repurchase agreement. Buying back stock reduces the number of shares outstanding, thus boosting EPS and possibly improving the attractiveness of Visa's valuation. Since 2010, Visa has retired nearly a fifth of its outstanding shares as a result of buybacks.

13. Partnerships
Visa's high margins and solid FCF also allow it to partner up with smaller payment technology companies that could be sitting on stellar ideas. In July of last year Visa announced a partnership with Stripe that saw Visa make a direct investment in the online and mobile-based payment solutions company. On one hand, Stripe gets access to Visa's expansive merchant network in overseas markets, while Visa gains access to new merchant payment experiences that could enhance its current payment solutions portfolio.

14. Inorganic growth
On top of partnerships, Visa also supplements its organic growth with acquisitions. Earlier this year Visa gobbled up a 10% stake in rival Square, but the game-changer could be its purchase of former subsidiary Visa Europe for around $23 billion. This move should allow Visa to cut expenses long-term and boost fees over in Europe, further boosting FCF, operating margin, and profits.

15. Institutional ownership
Lastly, we see that a whopping 93% of Visa's float is held by institutions and mutual funds. Although big money isn't always right, it's worth noting that nearly 1,500 institutions and money managers believe Visa will be worth more at some point in the future than it is now.

Is there a key point I missed that'd entice you to buy Visa and never sell? Share it in the comments below.