Please ensure Javascript is enabled for purposes of website accessibility
Log In Help Join The Motley Fool
Free Article Join Over 1 Million Premium Members And Get More In-Depth Stock Guidance and Research
By Steve Heller - Apr 25, 2016 at 10:00AM

Proto Labs (PRLB 3.05%), the world's fastest manufacturer of real parts, will report its first-quarter earnings and host a conference call before the market opens on April 28. Thus far, it has delivered 14 consecutive quarters of record sales. While many investors will want to see it post its 15th consecutive quarter of record sales on Thursday, there are three areas that may help investors better determine if the company remains poised for longer-term success.

1. Product developers served; average revenue per developer
The two most crucial elements for Proto Labs' earnings are the number of product developers it serves in a given quarter and spending per developer. Ideally, investors will want to see both of these figures rising on an annual basis as it indicates that not only is acceptance for its rapid manufacturing and 3D printing services growing in the marketplace, but also that existing developers becoming more loyal to Proto Labs' manufacturing services platform. 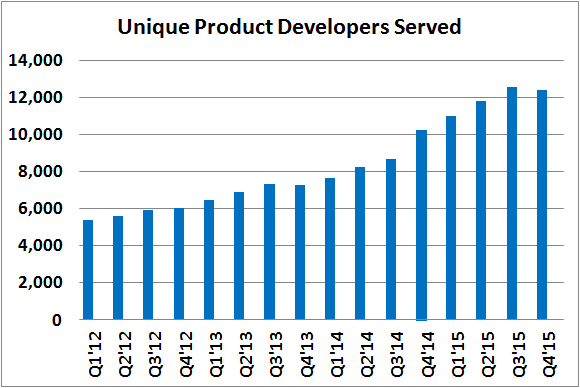 2. International growth
Although it's been a challenging environment for many industrial-facing companies to drive meaningful growth internationally, Proto Labs has been a notable exception. Last quarter, the company reported stellar growth in Europe and Japan thanks to improved marketing efforts that raised the regions' awareness of its manufacturing and 3D printing services. Even after accounting for unfavorable currency translations due to the strong U.S. dollar, Proto Labs' first-quarter revenue in Japan rose 54% year over year, while it increased 22% in Europe.

3. Operating profit margin
Over the last year, Proto Labs' revenue has been growing at a healthy clip, but its operating profit margin has come under pressure. Aside from its growing 3D printing business commanding a lower gross profit margin than its manufacturing services, this divergence has been driven by efforts to foster longer-term growth -- mainly from increased marketing and personnel spending. 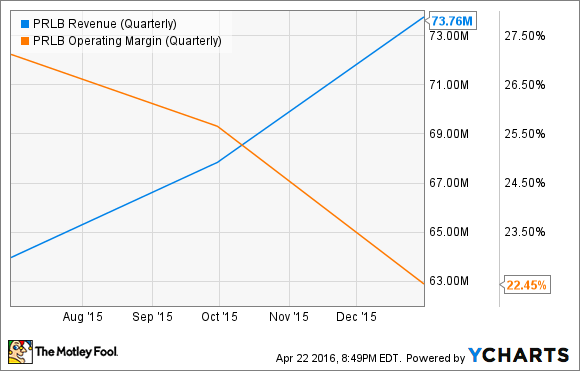 Understandably, a business must invest in the short term to drive longer-term growth. But since operating margins directly affect bottom-line profits, the investment payoff should be reached in a reasonable amount of time. If operating margins continue to fall without a solid explanation from management, it could indicate a potential red flag about the company's future profitability potential.

All eyes on Thursday
When Proto Labs reports earning on Thursday, focus on the how the business is performing rather than how investors react to the news. Key into the number of product developers served, average revenue per developer, international sales performance, and operating margins, to see if its long-term investment thesis remains intact.