Please ensure Javascript is enabled for purposes of website accessibility
Log In Help Join The Motley Fool
Free Article Join Over 1 Million Premium Members And Get More In-Depth Stock Guidance and Research
By Rich Smith - Apr 27, 2016 at 11:16AM

If you're a cash-focused investor like myself, it presents an attractive proposition and it is still election season.

My, how the mighty have fallen.

Just a little over a month ago, Smith & Wesson (SWBI 0.53%) was enjoying yet another banner election year. With guns in politicians' crosshairs, there was every prospect that panicked gun owners would once again flood into gun stores, with fistfuls of dollars and ready to spend, fearful that a new president would soon try take their guns. Smith & Wesson was riding high in the saddle, until suddenly ... 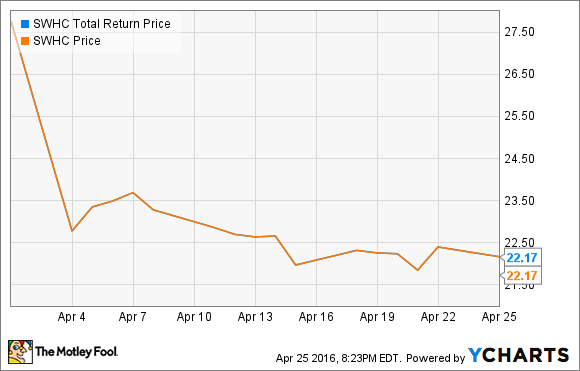 What laid Smith & Wesson low?
According to the analysts -- Cowen and Co., CL King, and BB&T Capital -- new data from the FBI's National Instant Criminal Background Check System showed a 13.2% sequential slide in the number of background checks for handgun purchases between February and March. Background checks for would-be long gun purchasers likewise declined -- down 8%.

This set off a panic of another order entirely, and a stampede out of Smith & Wesson stock, driving the stock's price as low as 25% below its March 14 peak. And it raises an intriguing question for value investors:

Is even a 13% decline in gun sales (which the NICS data seem to imply) enough to justify a 25% decline in stock price?

Valuating Smith & Wesson
A definitive answer to this question may have to wait until June, when Smith & Wesson is next due to report financial results to investors. In the meantime, all we have to work with is historical data. (But honestly, historical data aren't all bad. At the least, they're more reliable than future projections).

So what do these data tell us?

On the fourth hand, though (even with the fastest hands in the West, we're fast running out of hands), data from S&P Global Market Intelligence show that over the past 12 months, Smith & Wesson stock generated free cash flow of $131.7 million. That's 64% ahead of reported GAAP income of $80.2 million.

So what's it all add up to? Valued on free cash flow, Smith & Wesson stock sells for just 9.3 times FCF -- which seems cheap for 15% growth. If you're a cash-focused investor like myself, that's an attractive proposition. And with an election still on the horizon, and guns still a hot topic, it might even be an attractive enough valuation to take a flyer on Smith & Wesson stock, and pick up a few shares after their slump.