The staffing firm posted strong growth, but declining margins and an analyst downgrade may be contributing to the stock's decline.

What: Shares of staffing services firm Robert Half International (RHI 2.12%) slumped on Wednesday following the company's first-quarter earnings report. Robert Half's results were in line with analyst estimates, but an analyst downgrade may have helped trigger the sell-off. At 10:15 a.m. ET, the stock was down about 12.8%.

So what: Robert Half reported quarterly revenue of $1.3 billion, up 8% year over year and in line with the average analyst estimate. All of the company's divisions posted revenue growth.

Despite this growth, both gross margin and operating margin declined due to higher costs. Gross margin came in at 40.8% during the quarter, down from 41% during the prior-year period, while operating margin fell 30 basis points to 10.3%. Robert Half did manage to grow earnings despite these declines, posting EPS of $0.64, up from $0.58 during the prior-year period and in line with analyst expectations.

Now what: The steep decline in the stock price following the company's earnings report may indicate that investors were expecting an earnings beat. A downgrade from Avondale Partners to "market perform" didn't help either. Shares of Robert Half are down significantly over the past year, but a strong rebound from February lows may have pushed the stock too high, too fast. 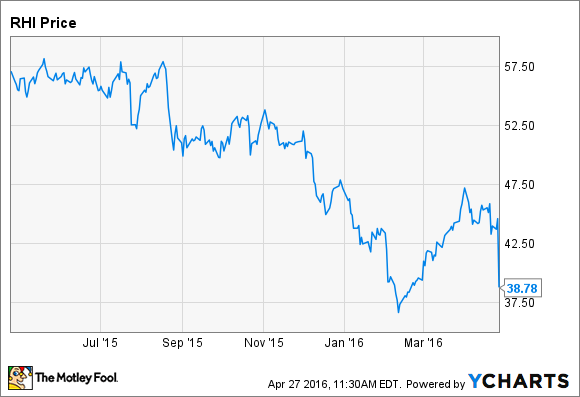 Robert Half's results were generally solid, with the only real negative being the slightly lower margins. CEO Harold Messmer Jr. pointed to the company's record of growth: "This was the company's 24th straight quarter of double-digit earnings-per-share percentage growth on a year-over-year basis. Unlevered return on equity was 33 percent."

Timothy Green has no position in any stocks mentioned. The Motley Fool recommends Robert Half International. Try any of our Foolish newsletter services free for 30 days. We Fools may not all hold the same opinions, but we all believe that considering a diverse range of insights makes us better investors. The Motley Fool has a disclosure policy.

Why Robert Half Stock Popped 7% on Wednesday

Robert Half International Earnings: The Details