Please ensure Javascript is enabled for purposes of website accessibility
Log In Help Join The Motley Fool
Free Article Join Over 1 Million Premium Members And Get More In-Depth Stock Guidance and Research
By Daniel Miller - Apr 28, 2016 at 10:08AM

Group 1 Automotive topped estimates with its first quarter, sending shares up 7% on Wednesday.

Shares of the No. 3 U.S. automotive dealership group topped analyst estimates today when Group 1 Automotive (GPI 1.12%) reported its first quarter. Despite the company dealing with hailstorm damage and rising insurance deductibles from the damage, it posted record earnings for the quarter.

Let's take a look at the key figures, what management had to say, and what it means for investors. 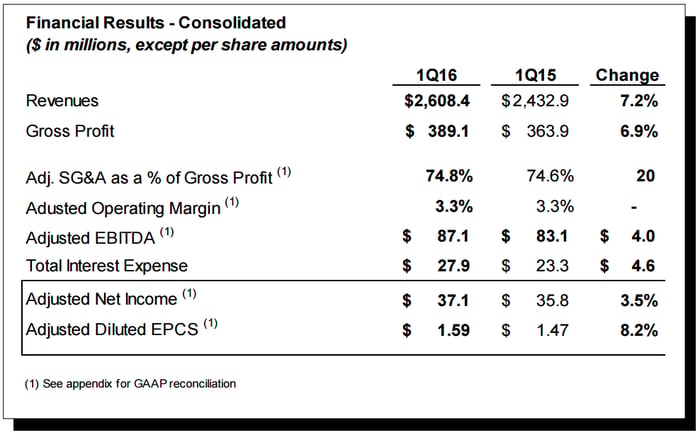 Those adjustments primarily excluded $1.7 million of net after-tax items for insurance deductibles from hailstorms that swept across the Midwest, as well as roughly $0.8 million related to the divestiture of four stores in Brazil.

Looking at some other key factors, Group 1 continued to wring out more revenue per new vehicle, as new-vehicle revenue jumped 5.8% on only a 3.9% unit sales gain during the first quarter. That helped push new-vehicle gross profit 2.9% higher to $71.7 million.

Parts and service gross profit also increased a healthy 10.5% on a 9.4% revenue increase. This is particularly great news for investors, especially when there are concerns that sales of new vehicles might be peaking, because the parts and services business doesn't decline nearly as substantially as sales do during rough times -- see the graph below for a great example.

What management had to say
In a press release, Group 1's president and chief executive officer, Earl J. Hesterberg, said:

The Brazilian auto market dropped another 28 percent in Q1 due to massive political turmoil, yet our Brazilian operations held Same Store revenue flat on a local currency basis -- an amazing performance. Additionally, we implemented a significant set of portfolio enhancement actions this quarter, which include the dives[ti]ture of four underperforming stores and the addition of four growth franchises. These actions should largely conclude our store restructuring program and better position us to maintain profitability in Brazil this year.

What surprised me
Perhaps the most intriguing figures out of Group 1's financials during the first quarter were the 2.9% and 0.4% gains in both new- and used-vehicle gross profit per unit. Those gains haven't been a widespread industry trend, and they're particularly impressive considering Texas generated nearly half of the company's new-vehicle unit sales during the first quarter, and the region posted a decline in sales because of plunging oil prices negatively impacting many employed in the industry.

It's clear Group 1's efforts to restructure its business during the financial crisis and past recession have really paid off. The dealership group has posted impressive compound annual growth rates of 13.1% and 20% in total revenue and adjusted EPS, respectively, since the beginning of 2011. And despite shares trading up 7% Wednesday after Group 1 reported its quarterly earnings, investors need to keep an eye on how new acquisitions are folded into the business and how its international expansion progresses.