Half of Oshkosh's business is still floundering, but that didn't matter a bit.

Rarely have I been so happy to be proven wrong. 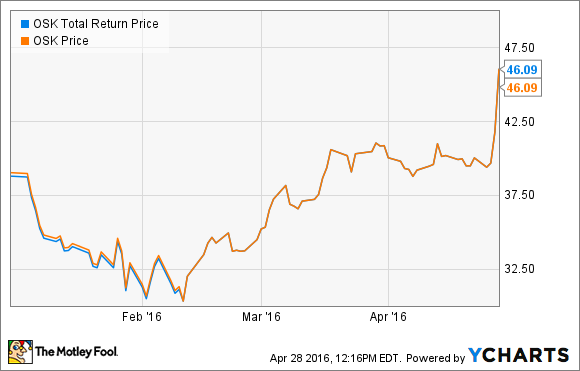 Previewing the earnings report for Oshkosh Corporation (OSK -1.25%) yesterday -- a stock I own, by the way -- I placed a great deal of emphasis on the health of the company's access-equipment business, which accounts for more than half of annual sales. "For this one particular defense business, it's the health of the civilian economy that may prove the most important thing to watch of all," I noted.

And boy, was I ever wrong about that.

The news
As it turned out, Oshkosh's civilian access-equipment business is still not healthy at all, but that didn't matter a whit to Oshkosh's financial results, or to the investors who bid up Oshkosh stock by more than 11% on Thursday. Instead, the big news was all about defense. Here's how the numbers shook out:

Or put more simply: Revenues hardly shrank at all, and profits are growing.

How'd they do that?
Venturing into the weeds a little now, let's take a look at how Oshkosh achieved this feat. First, as alluded to above, business in Oshkosh's flagship access-equipment division is still horrible. Sales there declined an eye-popping 23%, and operating profits plunged 45%. (And yet, management mused, it could have been worse: This was still "higher-than-expected sales.")

Offsetting the bad news in access equipment, meanwhile, Oshkosh reported a huge spike in sales of defense products. A 1,000-plus unit sale of M-ATV armored cars, which management feared might not materialize before fiscal 2017, came through in Q2 of 2016.

Family of Heavy Tactical Vehicles ("FHTV") sales grew nicely in the quarter. And the company is now all set to ramp up production of JLTV armored trucks for the U.S. Army, as well, now that Lockheed Martin (LMT -0.34%) has dropped its lawsuit.

All that added up to an 87% jump in defense sales in the quarter. Combined with a big 18% jump in fire-and-emergency vehicle sales, as well, and a modest 7% uptick in the company's commercial segment, this was apparently enough to offset Oshkosh's struggles in access equipment, and turn a miserable quarter into something significantly less bad.

Valuation
This brings us to now, with an Oshkosh stock price 11% higher than what the stock cost just 24 hours ago. And it raises the question: Now that the price has already jumped, does this mean the armored car left the station, or is there still time for an investor to clamber aboard?

With $6 billion in trailing sales, and a market capitalization of just $3.4 billion, Oshkosh stock still sells for about half the "usual" 1.0 P/S ratio that is my rule of thumb for valuing defense stocks. That's a good first clue that there's still value to be had in this stock. Valued on GAAP earnings, the stock sells for a P/E of 16.1 -- also not expensive.

Valued on a free cash flow basis, though, S&P Global Market Intelligence data shows Oshkosh stock generating only $112 million in cash profits during the past year. That yields an enterprise value-to-free-cash-flow ratio of 30.2, which actually does sound kind of expensive.

Personally, I look at these numbers and think, "Hey, two out of three ain't bad." But I readily admit that the free-cash-flow number at Oshkosh remains weak, the resulting EV/FCF ratio expensive, and the continuing struggles of the company's dominant access-equipment division discouraging. If you choose not to follow my lead and buy Oshkosh stock, there are more than enough reasons not to.

In that case, though, I'll just have to hope that if you don't buy Oshkosh, it'll be you, and not I, who this time will be proved wrong.