Please ensure Javascript is enabled for purposes of website accessibility
Log In Help Join The Motley Fool
Free Article Join Over 1 Million Premium Members And Get More In-Depth Stock Guidance and Research
By Beth McKenna - Apr 29, 2016 at 11:30AM 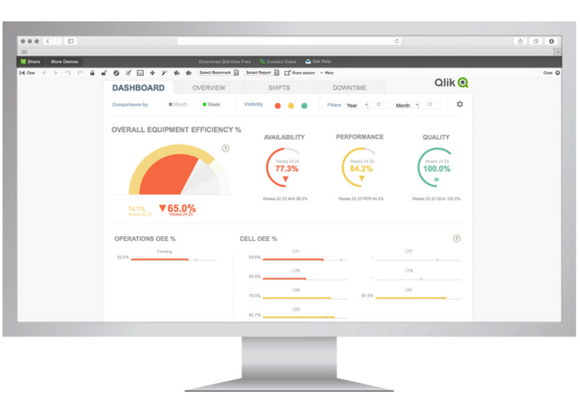 Qlik Technologies (QLIK) reported its first-quarter 2016 earnings after the market closed on Thursday. The data analytics software company reported strong year-over-year revenue growth of 15%, and 18% in constant currency, while adjusted earnings per share were unchanged from the year-ago period. The company edged up its full-year 2016 guidance on Q1 results that exceeded its expectations.

Qlik's stock rose 4.8% in after-hours trading on Thursday. This rise can be attributed to revenue and adjusted earnings exceeding analysts' estimates, as well as the company's guidance.

The stock was down 14.8% for the one-year period through Thursday. It has struggled since hitting an all-time high in August, however, it's made a considerable comeback since mid-February when the company reported fourth-quarter earnings. Part of this rebound can be attributed to activist-investor hedge fund Elliot Management buying an 8.88% stake in the company in early March.

Qlik's revenue and adjusted EPS solidly beat the $134.4 million and negative $0.12, respectively, that analysts were expecting. Long-term investors shouldn't pay too much heed to Wall Street estimates, as analysts are very short-term-focused. However, expectations help explain market reactions, so they can be worth knowing.

More importantly, the company exceeded its internal revenue and earnings guidance. It had expected an adjusted EPS loss in the range of $0.14 to $0.12 on revenue of $132 million to $136 million.

What happened with Qlik this quarter?

What management had to say
Said Qlik CEO Lars Bjork in the company press release:

We are pleased with our performance in the first quarter. Our balanced business model and continued momentum with Qlik Sense® enabled us to deliver total revenue and non-GAAP operating results that exceeded the high-end of our first quarter guidance ranges. We are capitalizing on our growing market opportunity and the rising awareness for analytics and self-service visualization across all the customer segments we serve.

Original guidance was for EPS of $0.41 to $0.44 on revenue of $695 million to $705 million. Going into earnings, analysts were projecting that Qlik would earn $0.42 per share on revenue of $698.8 million in 2016. So, the lower end of the company's revenue range expectation exceeds analysts' estimates, while the low end of its earnings expectation range matches the consensus.

In short, Qlik posted results that suggest it's on target to deliver strong full-year 2016 results.