Please ensure Javascript is enabled for purposes of website accessibility
Log In Help Join The Motley Fool
Free Article Join Over 1 Million Premium Members And Get More In-Depth Stock Guidance and Research
By John Maxfield - Apr 30, 2016 at 9:31AM

After a dismal start to the year, Bank of America's stock turned things around in April.

Bank of America (BAC 0.53%) turned in one of the best performances in April compared with other big bank stocks, rising by 7.6%. While it's impossible to pinpoint exactly what caused its shares to climb this much, there are three likely culprits. 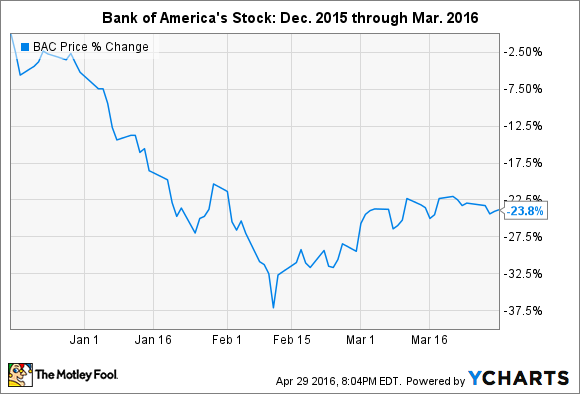 There were multiple reasons for investors to be concerned. The Chinese economy seemed to be teetering on the brink of a crisis. Britain announced that it will hold a referendum to decide whether to stay in the European Union. Interest rates are still woefully low. The prolonged decline in oil and gas prices are pressuring borrowers in the energy industry. And multiple banks, including Citigroup and JPMorgan Chase, had forewarned that first-quarter trading and investment banking revenues were trending materially lower than the year-ago period.

This pessimism caused bank stocks to plummet, which in turn laid the groundwork for a recovery in April, after Bank of America and others reported better-than-expected first-quarter results.

2. Earnings beat
One side effect of these well-publicized concerns is that they led analysts to repeatedly drop their profit expectations for the nation's biggest banks in the lead-up to first-quarter earnings season.

But this shouldn't be interpreted as evidence that Bank of America had a good quarter. Indeed, by most accounts it was dismal. Its top line revenue dropped by 6.7% on a year-over-year basis. And its return on assets came in at a mere 0.5%, which is roughly half as profitable as a reasonably well-run bank should be.

3. Innate volatility
Last but not least, Bank of America's shares tend to be more volatile than the typical stock, irrespective of the bank's fundamental performance. You can see this by looking at its beta, which measures how much a particular stock moves in relation to the broader market.

Bank of America's beta is 1.8, according to YCharts.com. On any given day, in turn, investors can expect shares of the nation's second biggest bank by assets to move 80% more than the S&P 500. If the S&P 500 increases by 1%, Bank of America's shares will on average be up by 1.8%. (The same is true on the downside.)

Given this situation, it should come as no surprise that Bank of America's shares not only outperformed the broader market in April, which ended the month higher, but also that their rise outpaced most other big bank stocks, as the average large bank has a beta of 1.4.