One social-media company has caught one Fool's eye, and it's not the one you'd think.

Will this logo represent innovation, or a service that peaked and declined too quickly? Only time will tell. Photo: Twitter

Normally, I only add to my winners. It may seem counterintuitive, but I've found that adding to stocks that I know well, and that have appreciated in price, leads to outperformance.

This goes against our emotional tendency to only buy things when they're cheaper, but that's largely due to the anchoring bias. Like all biases, it has a devastating effect on returns.

But this past month, I took a walk on the wild side, in a nerdy, investing-focused way. I added significantly to my family's holdings of Twitter (TWTR 1.65%) after the company tanked following its earnings release.

My reasons for buying are based on three pillars.

In a word, Twitter is "live"
Call me a simpleton, but I like it when I can explain why I'm investing in something to my 2-year old daughter. Why is this so important? Steve Jobs did the best job of explaining it:

"Simple can be harder than complex: You have to work hard to get your thinking clean to make it simple. But it's worth it in the end, because once you get there, you can move mountains."

"I cringe when I hear how your team describes your company's goals and by what means you're going to accomplish them. It sounds like you are using Silicon Valley-speak to grasp for something you're not quite sure of -- and it comes off as complicated, incoherent, and scattered."

But now, under the new guidance of co-founder Jack Dorsey, Twitter has not only clearly defined its focus, but it has also homed in on what it does best:

"We're focused on what Twitter does best: live. Twitter is live: live commentary, live connections, live conversations. Whether it's breaking news, entertainment, sports, or everyday topics, hearing about and watching a live event unfold is the fastest way to understand the power of Twitter."

When leadership, investors, users, and -- perhaps most importantly -- employees know what the raison d'etre is, everything runs smoother.

It's working
Bears are focused on the fact that monthly active users (MAU) have basically stalled over the past year. And they have a point -- especially domestically. 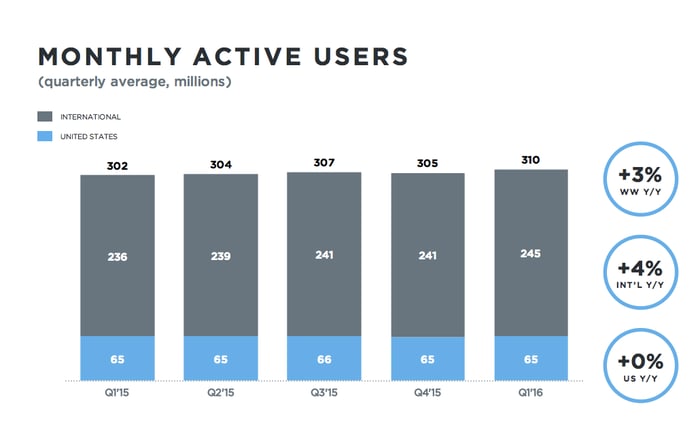 I'll be the first to state that if this is the saturation point for Twitter's user base, then I believe that my investing thesis is broken.

But it's only been a few months since Dorsey and company have crystallized their mission. And user growth itself wasn't even one of the key priorities for management heading into 2016. Instead, they are focused on refining the core service, expanding live-streaming video, becoming stickier for creators and influencers, enhancing safety, and enhancing the site via developers.

On almost all of these metrics, the company is succeeding. The total number of direct messages (DMs) sent was up 50% year over year, while tweets that were shared via DMs were up 75% from just last quarter. And only 2% of users have opted out of the new format where higher-importance tweets are shown earlier in the timeline.

In live-streaming video, Twitter already owns one of the most valuable properties around in Periscope. There was a 20% increase in videos posted over just the last quarter. But it is the company's deal to live-stream 10 Thursday Night Football games for the NFL that really has the potential to draw in additional users -- and advertising dollars.

And according to alexa.com, user engagement has been improving as well: The average user visits the page 5.34 times per day and spends an average of almost eight minutes on the site. While that might not be as impressive as some other social-media giants, that's more than enough time to feed ads to users.

The company is cheap
Let's look at how Twitter fares on non-GAAP measures of valuation and compare those metrics to the King of Social Media: Facebook (FB 1.83%).

Obviously, Facebook deserves a premium valuation -- it has absolutely dominated the social-media scene, has become a monetization machine, and has made savvy acquisitions in WhatsApp and Instagram.

But it's amazing how quickly we forget that Facebook was in the same boat. In September 2012, just after going public, Barron's magazine ran a story saying that Facebook's stock was only worth $15. What was the primary concern?

"CEO Mark Zuckerberg must find a way to monetize its mobile traffic because usage on traditional PCs, where the company makes virtually all of its money, is declining in its large and established markets. That trend isn't likely to change."

Of course, we all know how that has turned out. The point is not that Twitter will absolutely experience the same type of growth. Rather, it's that some companies have valuable properties. If they are "new" valuable properties (like social media), they can be tough to monetize -- until they aren't.

There isn't a playbook for Twitter to use on the path to monetization, but it's clear that the company is on the right track. 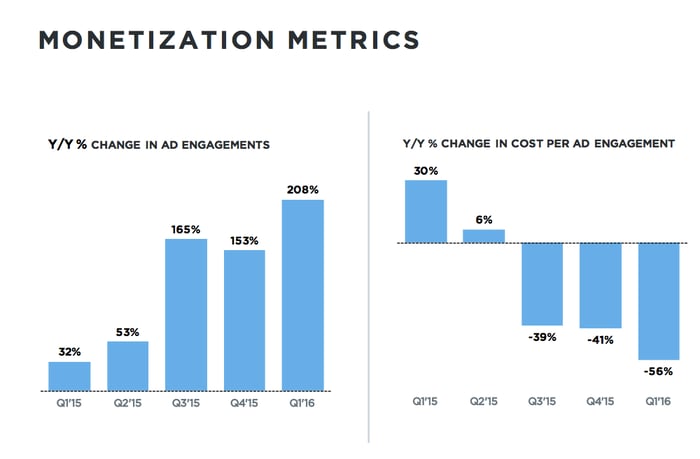 By now, you've no doubt heard about the revenue shortfall offered up in Twitter's guidance. But it's important to put this in context.

Dorsey has seen that advertisers are having more success with video ads rather than promoted tweets. That's meant a need to pivot where resources are going. The company can't accommodate the demand overnight, and that means there'll be a gap in revenue while the switchover is made.

For long-term investors, that shouldn't pose a problem.

At the end of the day, you've got a social-media company that occupies significant headspace globally. For the first time as a public company, Twitter has one defining purpose: becoming the leader in live events. Users are more engaged, and they are growing, albeit slowly. The migration of ad dollars from print media to mobile advertising is undeniable. Even if Twitter doesn't get as much of those dollars as Facebook, the shift will be very beneficial for investors.

Now that Twitter is sitting at 2.5% of my family's holdings, I think the risk/reward is favorable. The stock may go to $0, but it's just as likely to be a multibagger over the next decade. I'll take those odds.