Are stocks cheap or expensive given the ongoing sell-off? It depends what you're comparing them to. Anchoring is a behavioral bias that leads investors to do dumb things with their money. Image source: Thinkstock.

I'm moving into the market right now in a major way, but I'm trying to do so thoughtfully and with an eye toward the "anchoring" bias.

Let's say you walk into a retail store that uses frequent sales to draw in customers -- like J.C. Penney (JCPN.Q). If the tag on a dress shirt says the original price was $100, but the shirt is now marked down by 60%, it's hard not to think you're getting a bargain.

This conclusion is flawed, however, because the original price is artificial. J.C. Penney could have set the original price at anything it wanted to. But it marks it up with the full intention of later (sometimes even immediately) listing it for 60% off. Thus, the actual price is $40. Not $100.

That's anchoring. And people love to do it. It's why sales at J.C. Penney tanked when it abandoned its discount-based model in 2011 -- the company fired the CEO that did so and has since readopted the tactic.

To get back to investing, then, anchoring is something investors need to be especially wary of right now, because the S&P 500 has nearly doubled in price since the end of 2011. Yes, stocks are a lot lower than they were last year, but they're still way up: 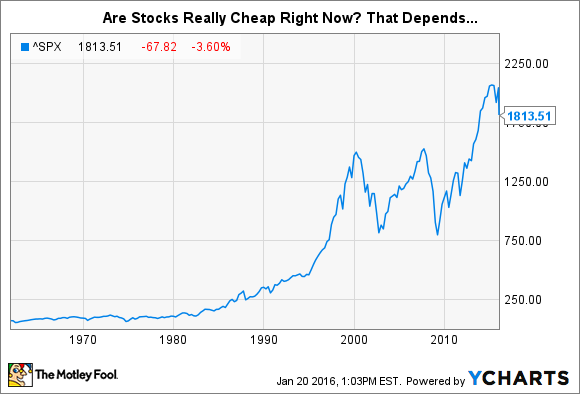 Let me give you two examples from my own portfolio to tease this out.

I started buying Chipotle Mexican Grill (CMG 2.27%) two weeks ago. I say "started buying" because I average into positions. Instead of buying my entire allotment of Chipotle's shares in one fell swoop, I plan to do so in three or four chunks over the next few months.

This protects me in the event that its shares continue to fall, as often happens after I buy a stock. And, in fact, that's what I'm hoping will happen this time, because it will give me the opportunity to lower the average purchase price of each share I end up owning.

My thesis is that Chipotle's shares are cheap in part because they've fallen by 40% relative to their 52-week high. The drop was ignited by an E. coli outbreak at some of its restaurants at the end of last year.

Some people believe the outbreak has rung the death knell for the company. That it's popped the burrito bubble. I disagree. My opinion is based on the fact that virtually every other major food service company in the United States has suffered a similar crisis in the past and still gone on to produce excellent shareholder returns.

Thus, in addition to the fact that I think it's a good company, I also believe Chipotle's current travails are temporary, not permanent. And in my mind, that creates an opportunity to be greedy when others are fearful.

That said, Chipotle's shares could still fall a long way. If this happens, my opinion that I'm getting them for a 40% discount relative to their 52-week high could very well lead to unrealized losses, at least in the short term.

Another stock I'm moving in on is Bank of America (BAC 0.51%), which I also purchased two weeks ago, based in part on the fact that its shares were roughly 25% off their 2015 high.

To be fair, it's safe to say I know more about Bank of America than the average investor, as I read and write about it more than I do any other company (here are four examples).

But this doesn't protect me against making a mistake. One could argue, in fact, that it makes me more prone to commit one, given that I've already formed a strong opinion about the $2.1 trillion bank. And strong opinions are hard to change.

So, if I'm wrong in my original opinion, then my anchoring will only make things worse, because it will expose me to error not only in my professional life (i.e., as a "senior banking specialist") but also in my portfolio, as I now own Bank of America's stock for the second time since the financial crisis.

Like Chipotle, the fact that Bank of America's shares are 28% lower than their 52-week high says nothing about where they'll be a year from now -- much less in five or 10 years.

Consequently, I probably shouldn't have used Bank of America's 2015 high as a input into my decision about whether to buy its stock two weeks ago. But here's the thing (and the same is true with Chipotle): I didn't think they were bad buys at their former highs. At today's prices, then, I really do think they're a bargain.

I hope I'm not anchoring.