Please ensure Javascript is enabled for purposes of website accessibility
Log In Help Join The Motley Fool
Free Article Join Over 1 Million Premium Members And Get More In-Depth Stock Guidance and Research
By John Maxfield - Jan 9, 2016 at 8:48AM

Low valuation and improving profitability are the main reasons I'm optimistic about Bank of America's stock.

When stocks dove at the beginning of last week, I bought shares of Bank of America (BAC -0.47%). My rationale was fourfold.

1. Valuation
Bank of America is a valuation play. Its shares trade right now for a 27% discount to book value, or roughly in line with its tangible book value (its shareholders' equity less goodwill and other intangible assets). Meanwhile, it isn't unreasonable to think that in good times, shares of the North Carolina-based bank will trade for "two times book," as an old industry adage goes.

This is a hunch, not a guarantee. But it's based on my analysis of the way the bank industry has worked since the Civil War, when American banking began to assume its modern shape.

Banking is cyclical. It always has been, and at least until compelling evidence proves otherwise, I assume it always will be. This reality can, and at least in my opinion should, be leveraged to buy low and sell high.

2. Growing profitability
Bank of America's problems since the financial crisis have revolved around high legal expenses, elevated loan losses (particularly from its credit card portfolio), and nonpermanent expenses associated with servicing subprime mortgages inherited in its 2008 acquisition of Countrywide Financial.

But all of these problems are now in their final throes:

Taken together, these three factors explain why Bank of America's profitability has finally started to emerge from under the cloud of the financial crisis. To this end, the third quarter of last year marked the first time since 2008 that the $2.2 trillion bank had reported four consecutive quarters of solid profits.

3. Virtuous cycle
As Bank of America's profit improves, so too will the valuation of its stock.

It's long been said that bank investors should "buy at half of book value and sell at two times book." This rule, while imprecise, rings true with Bank of America.

Shares of the nation's second biggest bank by assets bottomed out after the crisis at roughly 25% of book value in 2011 (the same year Warren Buffett invested in Bank of America), but they have been on an upward march ever since. This progress should continue, if not accelerate, so long as Bank of America's profits continue to grow. 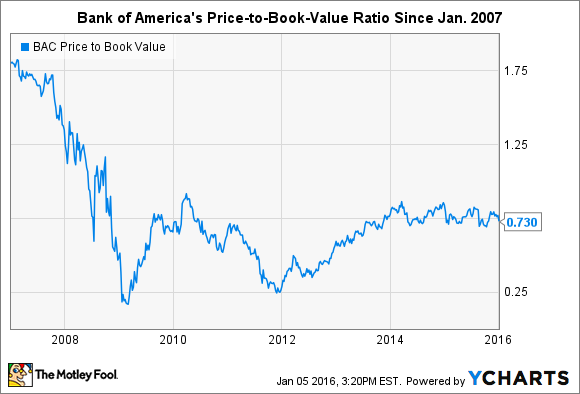 4. Capital return
Finally, boosting its dividend and share buybacks should serve as an additional catalyst for Bank of America's stock.

Investors have been clamoring for the bank to increase its dividend after the bank reduced its quarterly payout to only a penny a share at the nadir of the crisis. The bank responded last year with a fourfold increase. But while it now pays out $0.05 per share each quarter, that's still a fraction of its potential.

If Bank of America can earn 1% on its assets after tax, which seems probable, it will have $22 billion in earnings to dispose of each year. Most of this, according to CEO Moynihan, will be returned to shareholders. And assuming that it allocates a third of this to dividends, which is a standard percentage for banks, it could be paying out $0.20 a share in the not-too-distant future.

More importantly, assuming Moynihan is serious about buying back stock, as he intimated to Fortune's Tully in 2011, then shareholders could see the value of their stakes improved further. As William Thorndike covers in his excellent book The Outsiders, the best returns over the past 50 years have been driven in large part by appropriately timed stock buybacks. With Bank of America's still stock trading at a meaningful discount to its book value, every dollar spent on buybacks would, at present rates, increase its book value by $1.37.

In sum, while I've been critical of Bank of America in the past, I can't help but think it will indeed succeed at fully and finally recovering from the financial crisis. This could still be a handful of years out, but I'm in no hurry. I bought the stock for my retirement account and plan on holding it for many years.