Please ensure Javascript is enabled for purposes of website accessibility
Log In Help Join The Motley Fool
Free Article Join Over 1 Million Premium Members And Get More In-Depth Stock Guidance and Research
By Travis Hoium - Apr 30, 2016 at 9:00AM

A lot of solar companies have crashed and burned, but Canadian Solar Inc. has emerged as a leader in the industry for a few important reasons.

At a time when most Chinese solar manufacturers have rapidly grown and then fallen on their faces, Canadian Solar (CSIQ -1.49%) seems to have made it out of the solar inferno alive. How did it beat out companies like Yingli Green Energy, Trina Solar, and the bankrupt Suntech Power, who got a lot more attention along the way? 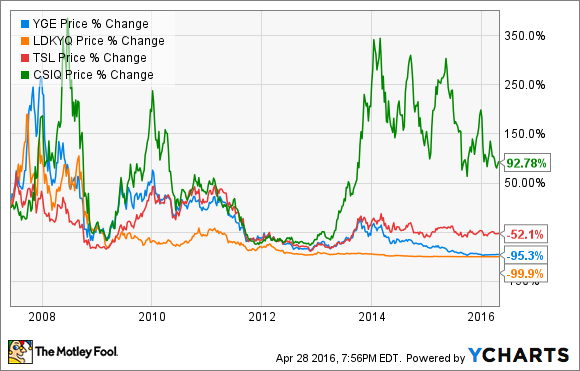 Growing up in the solar market
The growth path Canadian Solar has taken from 2006 to today isn't unusual for Chinese solar manufacturers, where the company produces most of its offerings. The company borrowed a lot of money to rapidly expand production and build scale in the process. 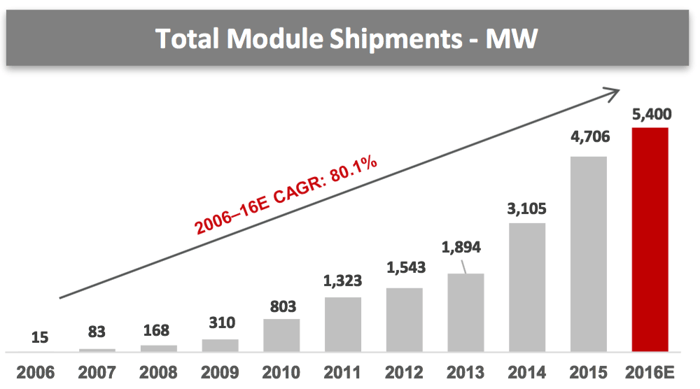 But key to this strategy was focusing on the back end of the value chain that turned out to be less volatile than upstream parts of the supply chain. You can see below that Canadian Solar has always had more module capacity than cell and even less wafer capacity. This turned out to be fortuitous because polysilicon -- which is a step further upstream than wafers -- ended up becoming an oversupplied commodity business, leading to the downfall of LDK Solar and others. 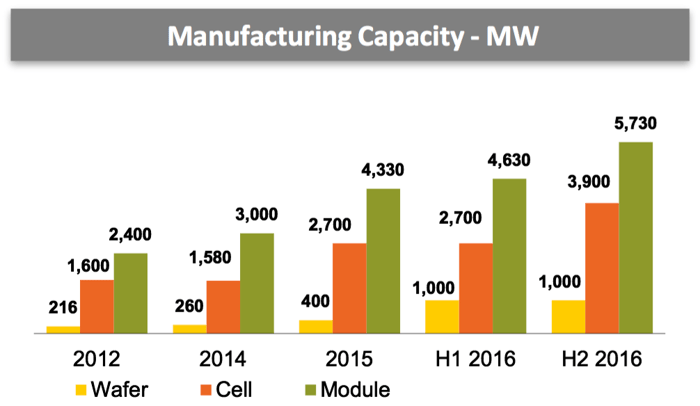 By building module capacity the company could control where the end product went and leverage the commoditization of polysilicon, wafers, and even cells in the solar industry.

The project business comes alive
When you control the module, you can choose where to sell them or even install them yourself. And after the massive oversupply of modules that occurred in 2012 (coinciding with a lot of financial trouble for solar manufacturers) it became clear that the downstream project development business would be key for manufacturers. Not only did Canadian Solar hold the modules developers wanted, it moved into the development business faster than most competitors.

You can see above the rapid move into project development over the past four years. And it should be noted that highly valued projects in Canada were a huge windfall for the company that really kept it afloat in hard times.

This aggressive move into project development ended up being what separated it from competitors. Instead of just selling panels into an increasingly commoditized market. And that will allow for the next round of innovation to keep the company in the solar business.

How Canadian Solar grows from here
Being one of the world's largest solar manufacturers and having a big pipeline of projects is good, but we've seen companies with both qualities go bankrupt in the last few years. So, standing still isn't an option for Canadian Solar.

The next step to long-term value is launching higher efficiency solar modules and moving more of the components from field installation to the factory floor. On the efficiency front, the company has launched ONYX 1 that it says will increase efficiency and improve aesthetics. And a Mono PERC design is said to increase cell efficiency to nearly 21%. The company has also played around with micro inverters, although that doesn't appear to be a big part of its business today.

Canadian Solar has one of the best chances to build long-term value out of all of the Chinese solar manufacturers. But it needs to keep up the innovation and build a sustainable development business backed by a solid balance sheet. It's on the way, but the plan is easier said than done.