GE has finally made it official, applying for "rescission" of its SIFI status. Here's what investors should expect.

The wait is finally over for patient investors of General Electric (GE -0.20%): The company has now officially applied to the U.S. Government to remove GE Capital's status as a Systemically Important Financial Institution.  At last, at long last, we can look forward to ... more waiting.

The wheels of government turn slowly.. And this de-designation, if granted, would represent the first time the FSOC has voluntarily granted such a request (although MetLife recently went to court to demand de-designation, and won). Here's what investors can expect as the process lurches forward.

The story so far: A long wait
The Financial Stability Oversight Council, the Treasury Department agency tasked with overseeing SIFI designations, gave GE Capital its SIFI status in 2013. Since then, GE has made a lot of changes to GE Capital, including selling billions of dollars of lending and leasing businesses and spinning off its private-label credit card company as Synchrony Financial (SYF 3.51%). The company plans to retain only those businesses directly related to its industrial operations -- for example, its aviation services financing arm.

GE has some excellent arguments as to why the new, leaner GE Capital should no longer be viewed as a SIFI. They're summed up quite well in this chart: 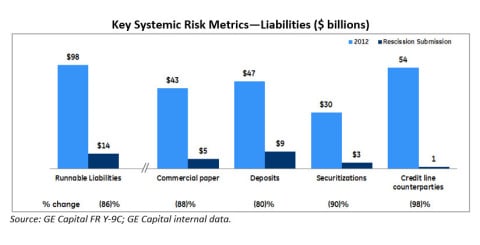 GE Capital's current liabilities (the dark blue bars) are much lower than they were in 2012 (the light blue bars), the year before the company was designated a SIFI. Further, of the company's non-cash, non-insurance-related assets, less than one-third are located in the United States.

But the Financial Stability Oversight Council isn't just going to de-designate GE Capital in the blink of an eye. Instead, it explains: "For each company that has been designated, the FSOC is required by statute to reevaluate the designation annually, and the FSOC's reevaluation process considers whether any material changes at the company justify a rescission of the designation."

GE Capital may believe it has made the requisite "material changes." But at its annual reevaluations, the FSOC has thus far declined to remove the designation.

And then we wait some more
Luckily for GE, there's another way it can proceed: "As explained in its final rule and interpretive guidance, the FSOC may also consider a request from a company for a reevaluation before the next required annual reevaluation in the case of an extraordinary change that materially decreases the threat the nonbank financial company could pose to U.S. financial stability."

And that's exactly what it's doing -- playing up the "complete transformation" of the company and claiming that it "does not pose any conceivable threat to U.S. financial stability."

However, the one thing that's missing from the FSOC guidelines is an estimated response time. According to the FSOC: "As part of each reevaluation, the company is provided an opportunity to meet with FSOC staff to discuss the scope and process for the review and to present information regarding any change that may be relevant to the threat the company could pose to financial stability, including a company restructuring, regulatory developments, market changes, or other factors."

GE is clearly prepared to discuss these topics and has plenty of information to present. But as of yet, no meeting or hearing has been publicly scheduled. About all we can assume is that it will take place sometime this year.

GE needs to shed its SIFI designation before Jan. 1, 2018, because that's when more stringent regulations will go into effect for the company, including stress tests and capital planning requirements.  The good news is, even if the FSOC drags its feet, it will almost certainly issue a ruling by then. And many analysts believe that GE makes a very strong case.  And, of course, if it's denied, it can still follow MetLife's example and head to court.

The payoff
So it's not particularly glamorous, but there is light at the end of the tunnel for patient (very patient) GE investors. And let's be honest, investors should be patient investors and look at a three- to five-year time horizon, at least, when evaluating stocks.

The era of the giant GE Capital, and its outsize effects on the company, has come to a close. Investors will receive a nice boost thanks to the $35 billion in share repurchases that the SIFI de-designation will make possible. GE will be able to get back to the business of manufacturing industrial products that change the world and make all our lives better. The sun will shine and all will be right with the world.

Except if it isn't. It would be almost inconceivable for the government to deny GE's request for rescission of its SIFI status, considering how much of the company's former assets are now elsewhere. I haven't seen anyone, anywhere, try to make the argument that GE somehow still deserves its SIFI status. But there's still the possibility, however remote, that the government could maintain GE's designation as a SIFI, and that even if GE went to court, it could lose. Which would definitely affect the stock price, as well as GE's plans to reward shareholders.

But that's a pretty far-fetched scenario. You should feel confident that GE's days as a SIFI are numbered. What the exact number is, though, is anyone's guess.