Please ensure Javascript is enabled for purposes of website accessibility
Log In Help Join The Motley Fool
Free Article Join Over 1 Million Premium Members And Get More In-Depth Stock Guidance and Research
By Jeremy Bowman - May 4, 2016 at 8:02AM

Investment strategies change with age. While a younger investor with a longer time horizon may seek out high-risk, high-growth stocks, older folks, especially those in retirement, will want investments that provide safety and a solid source of income. As a retiree, you'll want to make sure the stocks you choose will protect your initial investment, offer some growth, and have the ability to pay a growing dividend.

The S&P 500's Dividend Aristocrat list, which contains stocks on the index that have raised their dividends for at least 25 years straight, may be a good place to start, but bear in mind that past performance does not necessarily predict future returns. For stocks with bright dividend growth ahead, retirees may want to consider the three picks below.

1. Johnson & Johnson (NYSE: JNJ)
The healthcare conglomerate has been one of the most rewarding defensive stocks in recent years. Because of its diversification, it offers a level of safety that most pharmaceutical companies can't compete with. Whereas pharma giants such as Pfizer and Merck have to worry about having patent cliffs dent earnings, Johnson & Johnson, which counts consumer products and medical devices as major segments in addition to pharmaceuticals, doesn't have the same exposure.

The passage of the Affordable Care Act and the retiring baby boomer population should provide a tailwind for companies such as Johnson & Johnson. The stock surged in 2013, in the run-up to the ACA implementation, and has continued climbing since: 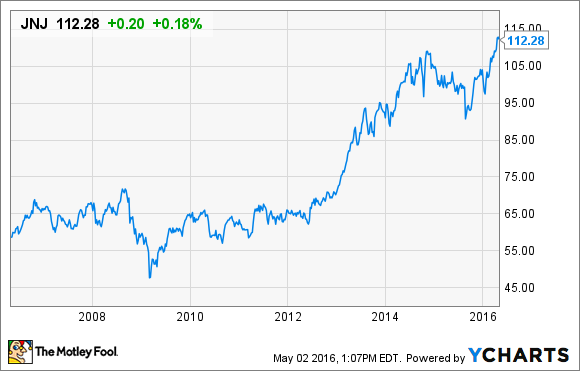 Johnson & Johnson offers a dividend yield of 2.9% and trades at a modest P/E ratio of 18. The company's dividend payout ratio, or the percentage of earnings that go to paying dividends, is just above 50%, indicating ample room to continue increasing dividends, and the company just raised its quarterly dividend 6.7% to $0.80. Those dividend increases have been consistent over the past 10 years, as the dividend has more than doubled in that time, and the company has raised its dividend annually for 54 years. I'd expect that pattern to continue.

2. Home Depot (NYSE: HD)
While Home Depot may not be the traditional defensive stock that Johnson & Johnson is, the home-improvement retailer has been a steady grower, both in its stock price and in its dividend, and has been surprisingly resilient despite occupying a cyclical industry. The stock fell less than the S&P 500 during the recession despite the epic housing bust. 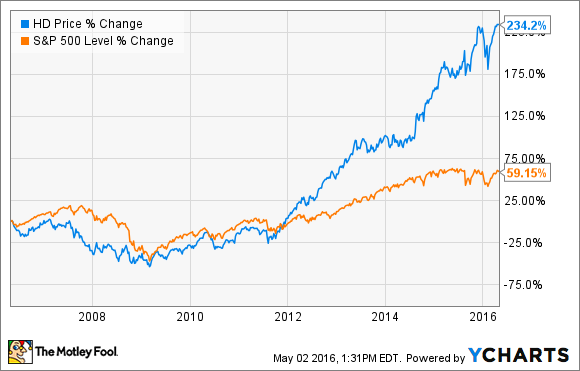 Since then, the stock has more than tripled and the dividend has followed suit, nearly tripling as well. Home Depot has beaten rivals such as Lowe's by resisting new store openings and focusing instead on increasing sales through its e-commerce platform and building relationships with professional customers. That strategy and the recovery in the housing market have driven its steady earnings growth in recent years, and the company now expects to grow sales to $101 billion in 2018 from $83 billion last year.

Today, the retailer offers a dividend yield of 2.1%, and a payout ratio of about 50%. Like Johnson & Johnson, the company has plenty of room to continue raising its dividend, and its earnings growth should allow for more hefty dividend increases. The company last raised its dividend in February, with a 17% increase.

3. Apple (NASDAQ: AAPL)
Like Home Depot, Apple may seem like an odd choice for a retirement pick, as tech stocks tend to be more volatile than the broader market, but Apple is a different kind of beast. Over the past few years, the company has morphed from a growth stock into a value play. Its recent earnings report was a disappointment, as revenue declined for the first time in 13 years, but the pullback sets up a good entry point for dividend-focused investors.

Apple now trades at a P/E of just 10, one of the cheapest megacap stocks on the market. The company has a net cash hoard of about $150 billion, meaning its P/E ratio after accounting for its cash balance is just 7. Though concerns about its future growth are understandable, there are plenty of reasons to balk at the notion that the company has peaked. The iPhone 7 release could drive sales higher, and the company is investing in long-term projects such as automobiles and television that could pay huge dividends in the future. India is a promising market, and service revenue in the form of Apple Pay, Music, and TV is likely to grow over the long term.

Apple is relatively new as a dividend payer but already offers a solid 2.4% yield with a payout ratio of less than 25%. Management has chosen to spend the bulk of its capital returns on share buybacks instead of dividend increases, but investors can expect more dividend increases such as the 10% one we just saw. Even if Apple's earnings remain flat over the coming years, the company can easily continue to boost its dividend.