Please ensure Javascript is enabled for purposes of website accessibility
Log In Help Join The Motley Fool
Free Article Join Over 1 Million Premium Members And Get More In-Depth Stock Guidance and Research
By George Budwell - May 4, 2016 at 2:41PM

Gilead Sciences and Biogen have fallen on hard times this year. Which of these top biotech stocks has the best chances of making a comeback in the near term?

Gilead Sciences (GILD 0.80%) and Biogen (BIIB 0.26%) have emerged in recent years as two of the most innovative and fastest-growing biotech companies in the world. Even so, these two biotech giants have both experienced a steep decline in their respective share prices this year: 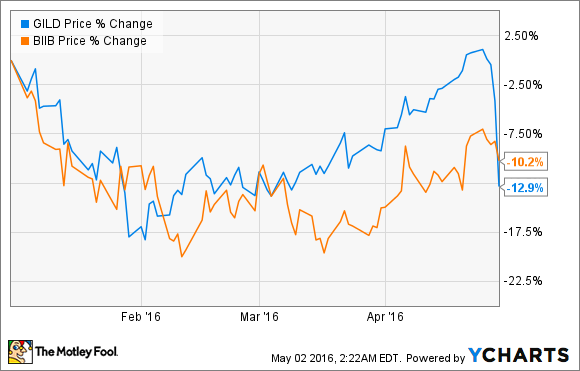 When top-notch companies like Gilead and Biogen experience a hefty double-digit decline, it might be a good time to start grabbing shares and holding them for the long haul. With this in mind, let's consider which stock is the better buy right now.

Gilead's period of hyper-growth is officially over
Gilead's shares took a big hit last week after the company announced that its hepatitis C product sales fell by 12% on a sequential basis due to an increase in discounts required to open up access to patients with lower fibrosis scores and a modest shift in payer mix toward more deeply discounted government payer segments. The biotech also said that the average treatment duration shortened during the three-month period as a result of a higher proportion of genotype 1 patients being treated for as little as 8 weeks, compared to the 24 weeks of treatment required for sicker individuals, which, in turn, contributed to this steep decline in hepatitis C product revenue for the quarter.

The good news is that Gilead did report that its HIV and other antiviral product sales jumped by 19% year over year, and the biotech exited the first quarter with a stately $21.3 billion in cash and investments. That said, there's no denying that Gilead's days of hyper-growth are over -- at least for the moment: 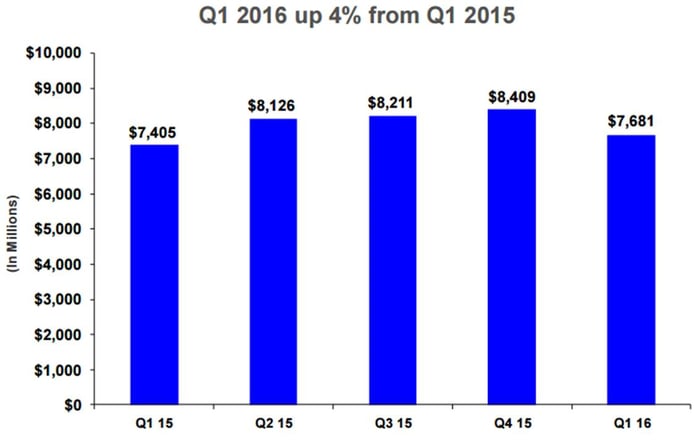 Looking ahead, Gilead is hoping to grab a nice chunk of the massive nonalcoholic steatohepatitis, or NASH, market to restart its growth engine. To do so, the biotech recently agreed to acquire the Nimbus Acetyl-CoA Carboxylase program, giving the company a total of four experimental compounds indicated for NASH. Aside from NASH, Gilead also has an interesting mix of experimental-stage oncology drugs in its pipeline that could create deep value for shareholders later down the line. However, Gilead will probably end up having to use a sizable amount of its cash reserves sometime soon in order to acquire a franchise-level drug candidate in oncology, especially after the biotech's clinical setbacks with Zydelig.

Summing up, Gilead's revenue is flattening right now due mostly to a drop off in its hepatitis C franchise, meaning the biotech's long-term outlook is going to depend heavily on its clinical efforts in oncology and other liver diseases such as NASH.

Biogen is underwhelming Wall Street
In the first quarter of 2016, Biogen barely missed consensus on its top line due to lower-than-expected sales for its multiple sclerosis drugs Tecfidera, Tysabri, and Avonex. The biotech's R&D expenses also came in about 4% lower than many analysts were projecting at the start of the year, reflecting a lack of major in-licensing deals during the quarter.

The long and short of it is that Biogen needs to ramp up its clinical output to offset the slowing domestic sales of its biggest revenue generator, Tecfidera. So, investors were somewhat disappointed to see the biotech take its proverbial foot off the R&D gas pedal to kick off the year.

On the flip side, management did report some encouraging news for the company's late-stage candidates such as aducanumab in Alzheimer's disease and nusinersen for spinal muscular atrophy. Specifically, the company is reportedly making excellent progress in terms of enrolling patients in two late-stage trials assessing aducanumab as a potential treatment for Alzheimer's disease. Biogen's partner Ionis Pharmaceuticals also updated investors at a recent meeting on the ongoing open-label midstage trial of nusinersen in infants with spinal muscular atrophy. Per the presentation, Ionis said that the latest analysis indicates that drug is slowing the rate of serious events such as progression to permanent ventilation or death, perhaps providing a realistic pathway for an accelerated approval sometime soon.

So, like Gilead, Biogen's longer-term outlook is going to be closely tied to its success and/or failure in the clinic. But unlike Gilead, Biogen's cash and cash equivalents of only $6.8 billion at the end of the first quarter doesn't provide much firepower to pursue a bolt-on acquisition in case its internal pipeline fails to hit pay dirt.

Which biotech is the better buy?
To be honest, I like both of these stocks, especially as long-term buys due to their diversified clinical pipelines and proven managerial teams. But Gilead is probably the safer bet simply because of the company's strong cash position. If Gilead's clinical efforts in oncology and NASH go completely haywire, the biotech can probably buy itself out of any major trouble by acquiring one or more mid-cap biotechs with promising late-stage clinical candidates. Biogen, on the other hand, would most likely have to take on additional debt to do the same, if aducanumab and nusinersen both flame out.