Please ensure Javascript is enabled for purposes of website accessibility
Log In Help Join The Motley Fool
Free Article Join Over 1 Million Premium Members And Get More In-Depth Stock Guidance and Research
By Tyler Crowe - May 4, 2016 at 1:50PM

The pipeline and storage company's results showed resilience, yet again, in a horrible oil market.

Every company that is in the energy industry is going to be somewhat affected by the downturn in oil and gas prices. Some, like Magellan Midstream Partners (MMP -1.29%), are just less affected.

Aside from some modest declines from commodity price-related business segments, Magellan churned out another solid quarter that even allowed management to raise its guidance for 2016. Let's take a look at the results for the quarter, and what investors can expect from the company through the rest of 2016.

The first thing that really stands out in these results is the rather large decline in distributable cash flow compared to this time last year. There are a couple of reasons for this. One is that the company did not realize as many gains from the part of its business that is tied to commodity prices.

The company also had some larger maintenance capital-spending obligations this quarter. Management noted that the company's maintenance capital spending was heavily weighted for the first half of the year, so expect cash flow numbers to improve as the year progresses.

From an operational standpoint, you could say that Magellan held serve. There were slightly less volumes moving through its refined products pipelines, but it made up for some of those losses with a decent uptick in crude oil volumes. Here's a quick breakdown of the company's operating margins by business segment. 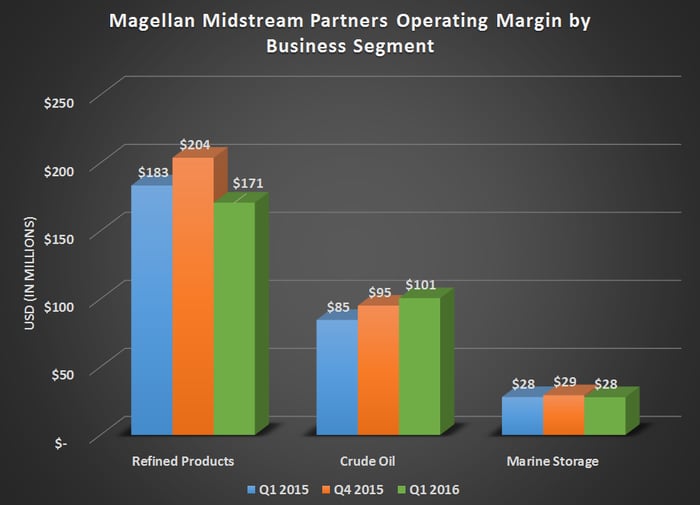 What management had to say
CEO Michael Mears, per his modus operandi, was rather brief when commenting on the company's results:

Magellan's assets continue to generate solid financial results despite the overall lower commodity price environment, emphasizing the stability and consistency of our conservative, fee-based business model. We remain committed to our disciplined financial policy, our focus on operational safety and our execution on strategic growth projects to benefit Magellan's future.

With about 85% of the company's profits coming from commodity price agnostic fees, there isn't a lot of variability in the company's results. What really matters for the company is that it keeps its network and storage facilities running at high-utilization rates, while bringing on new growth projects on budget.

Looking forward
Some might be slightly concerned with the decline in Magellan's distribution-coverage ratio, as the company is projecting a 2016 coverage of 1.2 times compared to the range of 1.4 times to 1.5 times that Magellan has posted from 2013-2015. Part of this has to do with the schedule of new projects coming online.

Most of its current capital-spending projects aren't expected to come online until the end of 2016, so the company will mostly be relying on its existing assets, and the modest fee increases to boost cash flow and earnings. There is also the option of acquisitions, though, and management has said it is looking at potential targets.

For now, investors should pay the most attention to the company's ability to bring its suite of projects online both on time and on budget. If it can do that, the company shouldn't have too much trouble maintaining its reputation of steady growth and sustainable distributions to shareholders.