Please ensure Javascript is enabled for purposes of website accessibility
Log In Help Join The Motley Fool
Free Article Join Over 1 Million Premium Members And Get More In-Depth Stock Guidance and Research
By Todd Campbell - May 4, 2016 at 12:17PM

What: After reporting first-quarter financial results that fell shy of industry watchers' forecasts, shares of Heartware International (NASDAQ: HTWR) were tumbling by 12.4% at 11:30 a.m. EST.

So what: The maker of implantable pumps, which can assist heart function, reported sales and losses of $55.07 milion and $0.95 per share, respectively, in the first quarter. Those results were short of analysts' projections for sales of $59.9 million and a loss of $0.79 per share.

Revenue was down from $70 million in the first quarter of 2015, and it marks yet another in a string of sequential quarterly sales declines for the company. 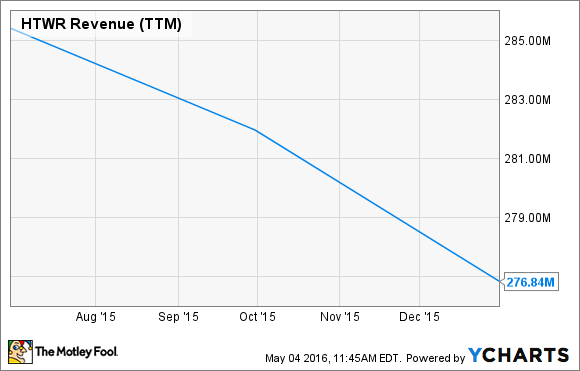 Overall, 578 HVAD Systems were sold globally last quarter, a 19% decrease from the first quarter of 2015.

Now what: It's been a struggle for Heartware investors. The company's efforts to develop a smaller version of its pumps have been delayed because of adverse events. Research is ongoing into the cause of those events, but no timeline has been given yet on when trials may resume, or if the device needs to be scrapped and reengineered. Additionally, while the company is working on gaining approval as a destination therapy, the current trends away from bridge-to-transplant treatment are creating major headwinds.

Last quarter, the company's operating expenses totaled $47 million, and the company has $189 million in cash and cash-like investments on its books, down from $244 million at the end of 2015, so the company could need to raise some additional funding at some point. Overall, until Heartware can win approval for its devices as a destination therapy, reverse the slide in unit volume, or right-size expenses so that it can become profitable, there are probably better investments to consider than this company's stock.