What: Shares of energy efficiency, infrastructure, and sustainability consulting company Ameresco Inc (NYSE:AMRC) are up more than 19% at 1:00 p.m. EDT on May 5, following the release of the company's first-quarter financial results before market open.

So what: The company's financial performance was solid, coming in well ahead of last year's Q1 results, and also better than Wall Street analysts were expecting. From the release:

Now what: Management also reaffirmed its full-year outlook of $645 million to $680 million in sales and earnings per share of $0.25-$0.30 for 2016. The company ended the first quarter with $1.4 billion in backlog, $361 million of which was under contract and the balance awarded but not yet under a signed contract. The company also has $174 million in cash-generating assets under development.

Ameresco's board of directors also authorized a $10 million share buyback program. That may not sound like much, but at the company's current market cap, it's nearly 5% of shares outstanding. With $17 million in cash and $43 million in available credit on its revolver, the company has substantial liquidity to spare, and management sees the stock as undervalued today.

Add it all up, and it looks like the company is finally getting some traction after seeing declining revenues, followed by uneven results, since 2012: 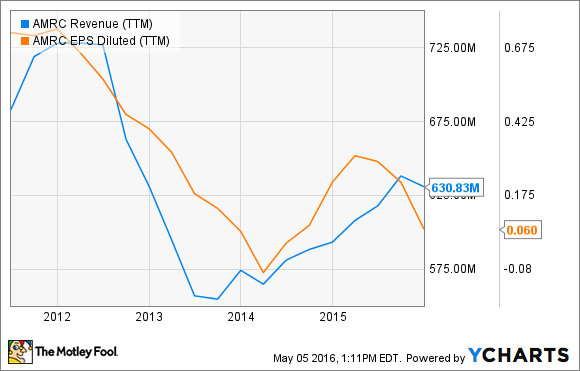 If the company's moves are paying off as well as they seem to be so far -- and the backlog growth continues to translate to sales and earnings -- the future could be pretty bright for the company.