Please ensure Javascript is enabled for purposes of website accessibility
Log In Help Join The Motley Fool
Free Article Join Over 1 Million Premium Members And Get More In-Depth Stock Guidance and Research
By Matthew DiLallo – May 5, 2016 at 3:47PM

What: A combination of stronger earnings and an update on its merger are fueling big rallies in not only Energy Transfer Equity (ET 0.55%), but related companies Energy Transfer Partners (NYSE: ETP) and Williams Companies (WMB -1.14%) on Thursday: 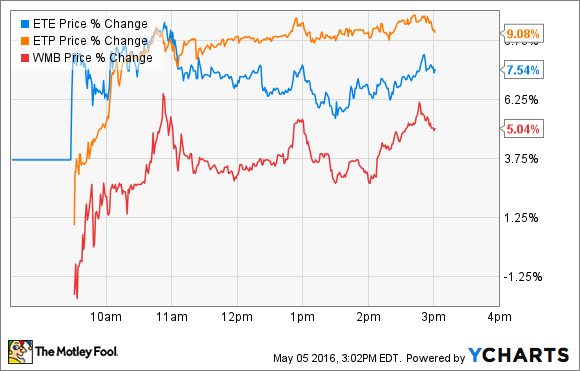 So what: The big news moving these companies were comments made by Energy Transfer CEO Kelcy Warren, who said that the company can't close its deal for Williams Companies under its current form due to the lack of a tax opinion from its legal team. Warren went so far as to say, "absent a substantial restructuring of this transaction, which Energy Transfer has been very willing and actually desiring to do, absent that, we don't have a deal." That's something the market is cheering because it doesn't like the deal in its current form, namely due to the $6 billion in cash Energy Transfer would be forking over to Williams Companies shareholders, which is cash it would have to borrow.

In addition to that both Energy Transfer Equity and Energy Transfer Partners reported first-quarter results, which were pretty decent. Energy Transfer Equity reported distributable cash flow of $349 million, which is up $28 million year over year. That's largely due to the solid results of its MLP, with Energy Transfer Partners adjusted EBITDA increasing by $46 million to $1.41 billion. Fueling that increase was the company's liquids transportation and services segment and its investment in Sonoco Logistics (NYSE: SXL), which delivered adjusted EBITDA increases of 34.3% and 57.9%, respectively. That being said, distributable cash flow was weaker, falling by $51 million to $793 million due to continued issues in its midstream segment, which pushed its distribution coverage ratio down to a worrisome 0.86 times.

Now what: Investors are growing more optimistic that the deal between Energy Transfer Equity and Williams Companies will either break apart or be reworked. Either option suits them just fine, just as long as it doesn't move forward in its current form. Likewise, investors are pleased with the first quarter reports of both Energy Transfer entities, though there are still some concerns at Energy Transfer Partners given its weak coverage ratio. Because of that weakness as well as the continued uncertainty surround the merger, investors can bank on more volatility from these three companies until these issues are fully addressed.