For more than a year, Royal Dutch Shell (NYSE:RDS.A) (NYSE:RDS.B) has been touting the benefits that the acquisition of BG Group would bring to the combined company. This quarter, when it got to show off how great this pairing will truly be, the results weren't exactly going to win any votes for belle of the ball. Let's take a look at Shell's most recent quarter and what investors should be looking for in the coming quarters as we start to wrap our heads around this new-look Shell

By the numbers
Now that the BG Group acquisition is complete and is part of the company, Shell can now report its combined earnings and give prior results on a pro forma basis. If you were to compare Shell's results with last quarter's without considering this change, the company's results might have looked pretty decent. When doing an apples-to-apples comparison, though, earnings were rather bland.

Shell ended the first quarter with net income coming in at $455 million, a nearly 90% decline from the same time last year (pro forma). The largest culprit for the decline was weak performance from the serial underperformer in the portfolio, North American upstream production, which posted a $1.5 billion loss for the quarter. The company also saw results at its refining and marketing component of the business decline, as refining margins narrowed throughout the quarter.

To be fair, though, the company did take $1.06 billion in special charges related to impairment of inventories and acquisition-related expenses. Without these, operational profits were a healthier sounding $1.55 billion. Also, it's not as though other Big Oil companies were having stellar quarters themselves.

Along with the new combined company's results, Shell has also changed the way it reports its operating segments. Rather than breaking them out as Upstream, Refining, and Chemicals, the company now will report its results as Integrated Gas, Upstream, and Downstream. Here's how the company's results look like under these new segments -- historical numbers are pro forma. 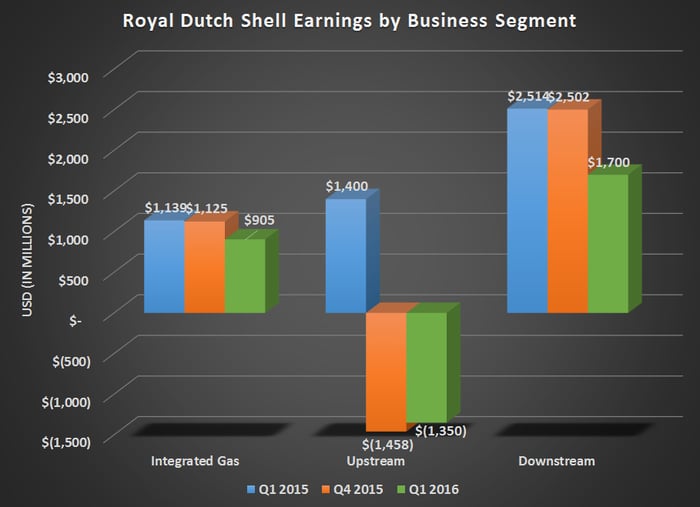 When you compare the company's results with its prior quarterly reports, one thing stands out rather clearly. When you remove the integrated gas component of Shell's business -- this is its LNG business --  from the upstream side of the business, it's pretty apparent that it was propping up even poorer performance from the traditional production of oil and gas. When you step back and think about it, though, it makes sense. Most of the company's integrated gas sales come from long-term contracts with set prices, rather than being beholden to the spot prices for oil and gas.

The other element of Shell's results this past quarter was its rather miserable cash from operations results. The company generated $661 million in operational cash for the quarter, an extremely paltry amount considering Shell's size. Even if we were to exclude the $3.9 billion in working capital increase Shell booked in the quarter, it would still be one of the worst quarters in terms of generating cash in a long, long time.

From the mouth of management
One of the things Shell has touted as a benefit of the BG deal was that the combined company would generate lots of cost savings both in its operations and its capital allocation. Sticking to that theme, CEO Ben van Beurden was quick to point out the cost reductions Shell plans to experience in 2016 as a result of the acquisition:

We continue to reduce our spending levels, to capture cost opportunities and manage the financial framework in today's lower oil price environment. The combination with BG is off to a strong start, as a result of detailed forward planning before the completion of the transaction. This will likely result in accelerated delivery of the synergies from the acquisition, and at a lower cost than we originally set out.

We will continue to manage spend, through dynamic decision-making across the organisation, taking advantage of opportunities from both the deflating market and the two companies coming together

What a Fool believes
In the long run, making the move to acquire BG Group will probably end up being a positive for the company. It's just that now it's making the company look very strained. Between the cash that Shell forked over as port of the deal and assuming BG's debt, the combined company will need to really execute on that lower capital spending program, as well as probably look to shed some more assets to clean up the balance sheet. It may take a couple of quarters for Shell to really work the kinks out of the acquisition, so investors should look to see if the company can indeed meet those cost-saving targets management has laid out. Doing so is critical for the long-term profitability of the company, or the lack of profitability if it can't.