Please ensure Javascript is enabled for purposes of website accessibility
Log In Help Join The Motley Fool
Free Article Join Over 1 Million Premium Members And Get More In-Depth Stock Guidance and Research
By Alex Dumortier, CFA - May 5, 2016 at 11:44AM

A hedge fund manager who made a billion dollars betting on the collapse of oil has found his next short. At the other end of the spectrum, ordinary investors should look at this long idea.

Today's tale starts a "big picture" macro bet, but stay with me as we follow it to a straightforward investment idea for ordinary investors.

Not content with the billion dollars he earned on his 2014 bet that the price of oil would collapse, hedge fund manager Zach Schreiber has been pondering the implications of that collapse. Naturally, that has led him back to the source of much of the world's oil and a trade he believes could return 10 to 50 times his money.

Speaking at the Sohn Investment Conference in New York yesterday, Schreiber is effectively shorting the world's second largest oil producer, Saudi Arabia, with a bet against its currency. The value of the Saudi Riyal has been fixed at 3.75 for dollar since 1986.

Schreiber says that so-called fixed peg is "massively overvalued," and he believes Saudi Arabia will soon be forced to repeg the currency so that it takes more riyals to buy a dollar. He estimates that with oil at $50 per barrel, Saudi Arabia will spend some $80 billion to $100 billion of its foreign-exchange reserves per year to fund -- among other things -- the expansive social programs that keep the kingdom's subjects happy.

With a GDP-per-capita of $52,010 in 2014, Saudi Arabia is one of the world's wealthiest nations -- it is 12th in the World Bank's ranking, two spots behind the United States. But I would have to agree with Schneider: I don't think Saudi Arabia is a great bet (whether it be in the medium or the long term).

In fact, I think investors would be much better off looking toward the other end of the spectrum in terms of wealth. Emerging markets have had a rough go of it over the past several years, as the five-year chart comparing the iShares Emerging Markets Index ETF to its S&P 500 equivalent clearly demonstrates: 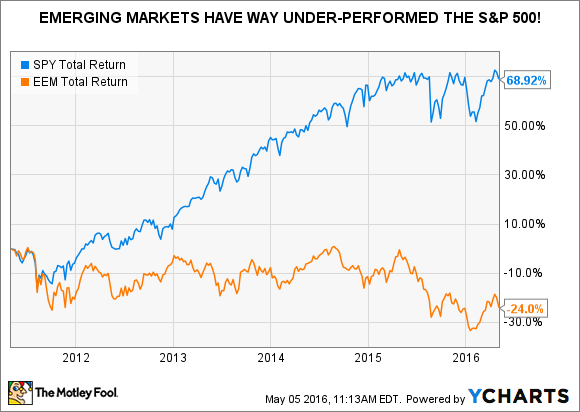 But past underperformance sows the seeds of future outperformance, and at some point, the valuation gap between the MSCI Emerging Markets becomes difficult to ignore.

The brainiacs at investment management firm Research Affiliates estimate that the MSCI Emerging Markets Index will earn an annualized real return of 8.1% over the next 10 years against just 1.3% for the S&P 500 (admittedly, their confidence intervals around the MSCI Emerging Markets' expected return is significantly wider). Over half of the differential between the two stems is attributable to an expected upward revaluation of emerging markets and a downward revaluation of the S&P 500.