Please ensure Javascript is enabled for purposes of website accessibility
Log In Help Join The Motley Fool
Free Article Join Over 1 Million Premium Members And Get More In-Depth Stock Guidance and Research
By Maurie Backman - Updated Mar 4, 2019 at 8:45AM

The sooner you start, the more you can set your kids up for success.

The same qualities that cause kids to obsess over fads and harp on seemingly minor disasters also allow them to soak up knowledge and retain life's teachings for the long haul. If you want to set your children up for a financially healthy future, your best bet is to impart some wisdom while they're still young. Here are five important lessons to start with. 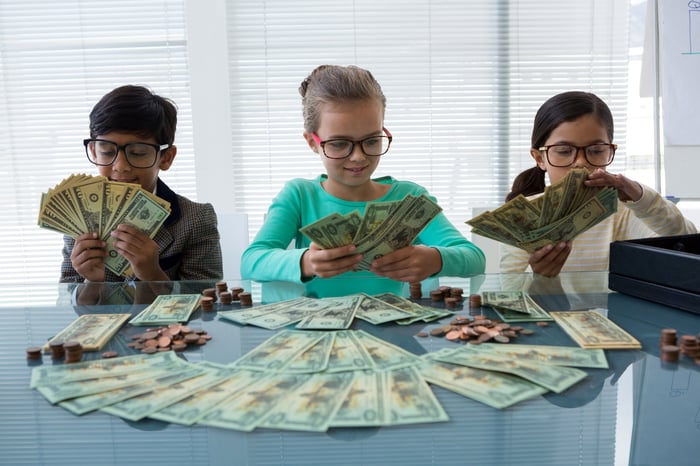 1. Money has to be earned
Many parents think that once their kids reach a certain age, they're due an allowance. In reality, you'll be doing your children a disservice by handing out money freely instead of making them earn it. Children should understand that money comes as the result of hard work. Rather than give your kids a set amount each week, give them opportunities to earn money by doing chores. Then, when they want to use that money, remind them that they had to take out the garbage and fold the laundry 12 times to earn enough to pay for whatever it is they're looking to buy. It'll teach them the real value of money, which they won't learn by snatching those dollar bills out your hands and running off to the store.

2. Know how much you have, and what you can afford
As soon as your children are old enough to count, teach them to keep track of how much money they have. Encourage them to regularly empty out their piggy banks and tally up their change, or look at their savings account balances and memorize how those numbers read. From there, explain how that money relates to the things they want to buy. Let's say your child has $20 in savings (which, sadly, is more than what some adults have) and wants to buy two $15 toys. Explain that if he buys one, he won't have enough money left over to buy the other, and it'll take some time for him to rebuild his savings to purchase something similar. So many adults run into trouble with credit card debt because they're never taught to buy only what they can afford, so the sooner you teach your kids to limit themselves, the better.

3. Always invest money you're not using
Sure, piggy banks are cute, but once your children reach grade school and understand the concept of putting money in a bank, they should have their own savings accounts. But that's not all -- you should also explain why it's a good idea to put money in a bank, as opposed to a box under the bed. Kids should be taught at a young age that their money should always be working for them -- namely, by earning interest in a savings account and, eventually, delivering a return on investments. Even if those interest payments are small, your kids will enjoy seeing how they work to help their balances grow over time.

4. Always aim to pay less
Why pay more than you have to for, well, anything? That's a concept you can teach your children simply by walking through a grocery or department store, comparing similar items, and choosing the ones that are on sale. Along these lines, bust out those coupon skills and show your kids how much money there is to be saved by planning in advance. It'll teach them to be strategic in their purchases rather than succumbing to impulse buys.

5. Never say no to free money
Passing up free money is something many of us do regularly, from failing to claim tax credits to forgetting to send in rebate forms. That wet $5 bill sitting in the middle of a puddle-soaked street? Make your child pick it up, take it home, hang it out to dry, and then put it in the bank. If you train your kids to never pass up free money, they'll be more likely to take advantage of similar opportunities when they're older -- like that employer 401(k) match, which is also free money, and quite potentially a lot of it at that.

Setting your kids up for financial success isn't just about contributing to their college funds and putting money into their savings accounts. Teaching your children the value of money and how to use it wisely will go a long way as they grow toward adulthood and the financial responsibilities that come along with it.