Please ensure Javascript is enabled for purposes of website accessibility
Log In Help Join The Motley Fool
Free Article Join Over 1 Million Premium Members And Get More In-Depth Stock Guidance and Research
By Rich Smith - May 6, 2016 at 2:30PM

Analysts' expectations got blown away for the best possible reasons. But what will Huntington do for an encore? 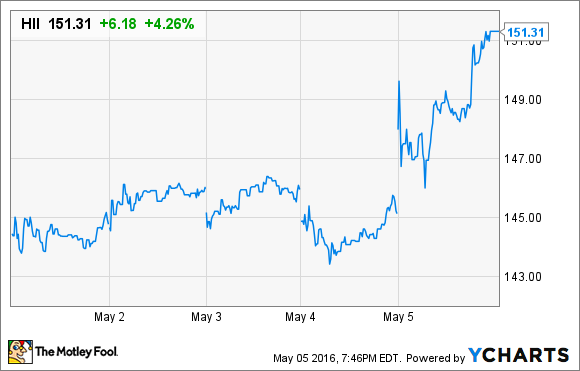 And that's where we'll begin our story.

Commenting on the quarter, CEO Mike Petters modestly observed that his company was continuing to "execute well," crediting a "strong operating performance at Ingalls Shipbuilding" for helping to boost results for the company at large.

How'd they do that?
What's perhaps most interesting about the huge earnings beat is that it does indeed appear to have come about entirely by dint of "strong operating performance." There were no one-time charges inflating comparisons to last year's Q1 to explain away, nor any large tax benefits recorded this time. The impressive earnings came quite simply from booking revenues, controlling costs, and dropping profit to the bottom line.

Now the question is whether Huntington Ingalls can keep up the good work?

Trouble in the water
In fact, that could prove difficult. Given how good Huntington's quarter was, it's hard to find facets to quibble with this week. But here are a few to chew on.

During the quarter, Huntington brought in only $1 billion in new orders for its shipbuilding businesses. And yes, $1 billion is an impressive sum, but it's considerably less than the $1.76 billion in revenues billed during the quarter. As a result, Huntington Ingalls' book-to-bill ratio was a discouraging 0.57 -- a number that if not quickly improved upon, points to lower revenues for the company in future quarters.

In contrast, the Newport News Shipbuilding division, which builds submarines and aircraft carriers for the Navy, did less well. Revenues at Newport News increased less than 9%, and profit margins actually declined by 110 basis points to 7.7%. And Newport News is still Huntington Ingalls' bigger business, producing more than twice the revenues that Ingalls brings in. Thus, its results weigh much more heavily on the company's overall performance.