Please ensure Javascript is enabled for purposes of website accessibility
Log In Help Join The Motley Fool
Free Article Join Over 1 Million Premium Members And Get More In-Depth Stock Guidance and Research
By Rich Smith - May 4, 2016 at 11:04AM 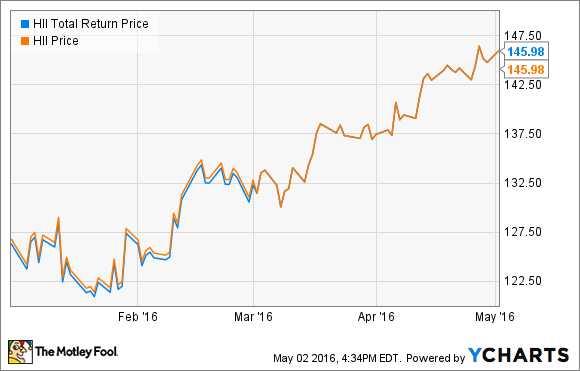 It's earnings season on Wall Street, and last week we looked at the earnings reports from just about all of the nation's biggest aerospace and defense companies. This week, our focus turns to second-stringers with a bit less name recognition -- companies such as military shipbuilder and Northrop Grumman spinoff Huntington Ingalls (HII 0.49%).

What management says
Commenting on his company's last earnings report in February, Huntington Ingalls CEO Mike Petters called 2015 "a pivotal year for HII as we achieved the 9-plus percent segment operating margin goal we established when we stood up the company back in 2011." (Operating margins for Huntington Ingalls stock as a whole, by the way, have already run up past 11%.)

What management does
And 2016 could be even better. Huntington Ingalls grew its revenue a bit less than 1% last year, to $7 billion. But the company added $7.6 billion in new orders in 2015, increasing its total backlog of work to be done to $22 billion, and giving the company a "book-to-bill" ratio of 1.08 for the year.

Result: With new orders coming in faster than old orders are fulfilled, revenue at Huntington is bound to rise this year -- perhaps faster than analysts' current estimates give the company credit for. And as for the profits Huntington Ingalls stock is earning on the bottom line, those, too, have been trending up:

What to watch tomorrow
At a recent high of nearly $147 a share, Huntington Ingalls stock has never been more richly priced than it is today. What's more, the stock is just pennies away from hitting the magic "1 times sales" valuation that seems to be the touchstone for defense stocks.

So what will we look for tomorrow? More orders coming in, obviously -- replacing orders fulfilled and building up backlog. That's what will secure further sales growth, and the possibility of further share price growth, in the future. At the same time, we have to bear in mind that defense budgets are tight, and the Pentagon isn't spending as freely as it once was. That's going to make it hard to grow sales and make it even more important for Huntington Ingalls to continue expanding its profit margins to keep earnings growth going.

Last but not least: free cash flow. As I wrote earlier this month, Huntington Ingalls' rebounding stock price has pushed the stock's P/S ratio up near 1.0 -- and its P/E ratio past 17. As a result, the stock is starting to look like less of a bargain than it once was. At last report, however, Huntington Ingalls was still doing a pretty fantastic job of generating cash from its business, to the extent that its price-to-free cash flow ratio looks about 40% cheaper than its P/E ratio.

As long as that remains true, there's still a case to be made for buying Huntington Ingalls stock. Tomorrow, we'll find out if it is still the case.