Please ensure Javascript is enabled for purposes of website accessibility
Log In Help Join The Motley Fool
Free Article Join Over 1 Million Premium Members And Get More In-Depth Stock Guidance and Research
By Rich Smith - Apr 27, 2016 at 11:31AM

A short, sharp spike in share price has value investors wondering if Huntington Ingalls is still a bargain.

Three months ago, asked to suggest just one defense stock to watch in 2016, I picked Huntington Ingalls (HII 0.01%) as a potential bargain. My reason? Actually, there were three. 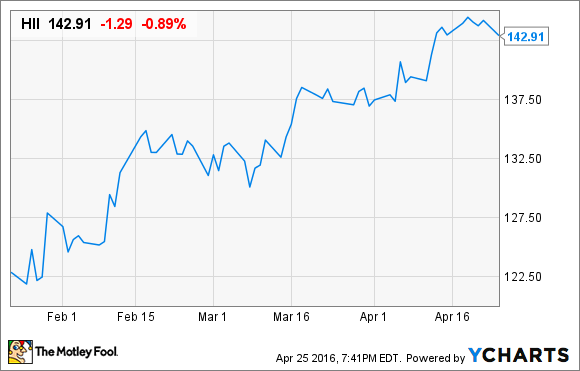 Here's how Huntington Ingalls stock has performed since I named it my top pick for 2016. HII data by YCharts.

First off, the stock's price-to-earnings ratio of 15 was one of the cheapest in the defense industry. Weighed against projected long-term growth rates of 9% annually, though, it wasn't cheap enough to justify buying on this metric alone.

So I added two more. Looking past GAAP "net earnings" to examine the underlying cash profits being generated at the company, I found Huntington Ingalls churning out cash -- enough so to drive its price-to-free cash flow ratio down all the way to 10. (That's cheap.) Last but not least, I measured Huntington Ingalls against my favorite yardstick for valuing defense contractors: price-to-sales.

Historically, you see, moderately profitable defense contractors with decent growth prospects tend to sell for prices roughly equal to the amount of revenue they generate in a year -- so a P/S ratio of 1.0. Huntington Ingalls, however, was selling for only 0.8 times sales. That was my final clue that the stock was "cheap."

Times change. Opinions do, too
For better or for worse (depending on your perspective), these shares are cheap no longer. The past three months have seen Huntington Ingalls shares spike 16% in value. Indeed, they recently hit an all-time high of more than $145 per share. The stock's P/E ratio has climbed past 17, and its P/S ratio is hovering just below "fair value" of 1.0.

In short, the stock is no longer a clear-cut bargain. But is it a sell?

Honestly, I'm not sure I'd go that far. According to data from S&P Global Market Intelligence, Huntington Ingalls' free cash flow at last report was $640 million produced over the past 12 months. Divided into the company's $6.8 billion market cap, that still works out to a price-to-free cash flow ratio not much above 10 (10.6, to be precise).

With analysts on Yahoo! Finance now predicting near-10% annualized earnings growth over the next five years, that still doesn't look terribly expensive to me. And Huntington is still the nation's only builder of nuclear aircraft carriers, and runs a thriving business building submarines and destroyers for the Navy, and cutters for the Coast Guard as well. And rival shipbuilders like General Dynamics do sell for even higher P/S ratios than Huntington currently. (By the way, General Dynamics reports earnings on Wednesday. Are you ready? )

Even if Huntington Ingalls isn't a bargain based on P/S, it may at least be a relative bargain within its industry.

The upshot for investors
Long story short, even after its impressive three-month run, I wouldn't risk shorting this stock just now. But with two out of three valuation metrics telling me it's no bargain, I wouldn't go long Huntington Ingalls, either.