Please ensure Javascript is enabled for purposes of website accessibility
Log In Help Join The Motley Fool
Free Article Join Over 1 Million Premium Members And Get More In-Depth Stock Guidance and Research
By Adam Levine-Weinberg - May 6, 2016 at 10:15AM

What: Airline giant United Continental (UAL -0.84%) has taken investors on a wild ride in 2016. The stock plummeted in January along with the rest of the stock market, but bounced back in a big way during February.

However, a big decline in unit revenue during Q1 and a disappointing Q2 outlook tripped up the stock again last month. United Continental shares plummeted 23.5% during April, according to data provided by S&P Global Market Intelligence. 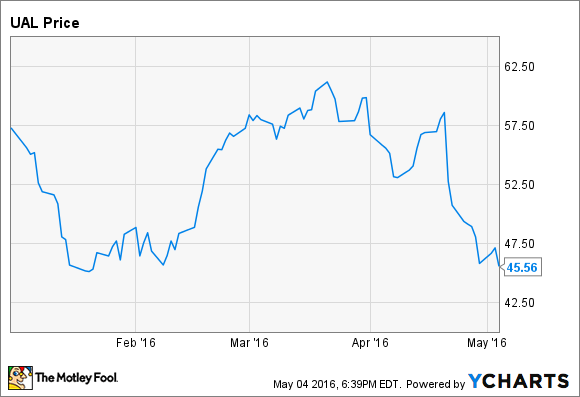 So what: Airlines have been buffeted by a weak unit revenue environment since early 2015, and United Continental has been among the worst hit. United has the most international exposure of any U.S. airline, and international routes have underperformed recently due to the impact of the strong dollar, falling fuel surcharges, and weak economic conditions in key markets like Brazil.

Last month, United Continental reported that passenger revenue per available seat mile (PRASM) fell 10.5% year over year during Q1 for its international routes. Even in the domestic market, United posted a mid-single-digit PRASM decline, driven by rising competition and weak demand in Houston, the energy capital of the United States.

United Continental still produced margin expansion last quarter, thanks to a sharp reduction in its fuel costs. However, it won't benefit from nearly the same level of fuel savings in the second half of 2016. That's worrisome for investors, because United's unit revenue still shows no signs of turning a corner.

Now what: The sharp drop in United Continental stock since the end of March has left it trading for less than six times the company's projected 2016 earnings. This indicates that a substantial earnings decline is already baked into the share price.

United's management has stated that unit revenue trends look a lot better for the summer and fall due to a combination of targeted capacity cuts, easier comparisons, and new revenue-boosting initiatives. By Q4, the company expects unit revenue to be roughly flat on a year-over-year basis except in the Pacific region.

If United can meet that goal, its stock should recover. However, airline executives have repeatedly underestimated the depth of their revenue challenges over the past year. As a result, United Continental shares will likely remain under pressure until the company can show tangible progress in its revenue recovery.