After dumping airline stocks in January, investors seemed to realize last month that they had overreacted.

What: Numerous airline stocks posted double-digit losses during the stock market rout in January. However, shares of two of the top four U.S. airlines -- Southwest Airlines (LUV 0.26%) and United Continental (UAL -0.67%) -- bounced back in a big way last month, as investors began to realize that they might have overreacted.

Southwest Airlines stock rose 11.5% during February while United Continental stock popped 18.6%, according to data provided by S&P Global Market Intelligence. That allowed both stocks to regain virtually all the ground they lost in January. 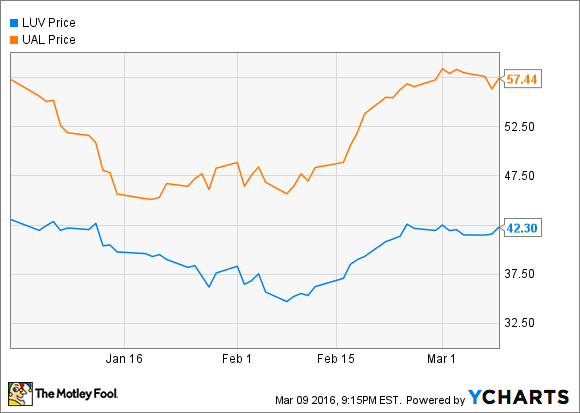 So what: In January, airline stocks fell in lockstep with declining oil prices. Lower oil prices should bolster airlines' profitability, but airline investors have been more focused on unit revenue trends than profit margins lately. Cheap oil has been bad for unit revenue, by encouraging stiffer price competition among airlines. United Continental has also been directly affected by the oil bust because its hub in Houston relies heavily on energy-related travel.

Oil prices have surged in the past month, rising by about $10/barrel. This drove an improvement in investor sentiment, allowing airline stocks to rally as well.

Southwest Airlines also likely benefited from completing two labor deals last month. As airline industry profits have soared in the past few years, unions have become increasingly strident, demanding that their members be rewarded with higher pay and better work rules. Even when airlines have offered fairly generous pay hikes, the contracts have often been voted down by workers.

Meanwhile, United's February performance was juiced by a big increase in its share buyback plans. On February 18, the United board approved plans to capitalize on the decline in the company's stock price by repurchasing $1.5 billion of stock during Q1: double its initial guidance. That's also more than United spent on share buybacks in all of 2015.

Now what: Southwest Airlines shareholders got more good news this week, as the company reaffirmed its guidance that unit revenue will be roughly flat year over year in Q1. That's likely to be by far the best unit revenue performance of any U.S. airline. And as noted before, airline investors have been extremely focused on unit revenue trends lately.

The outlook is not quite as bright at United Continental, which continues to expect passenger unit revenue to sink 6%-8% this quarter. Investors did get some good news recently, though. United announced that CEO Oscar Munoz will return to work full-time next week, after being sidelined by a heart attack last fall during his second month on the job.

A looming proxy fight between United Continental and two hedge funds that want to shake up its board further muddies the waters. On the plus side, the activist pressure could add urgency to United's turnaround efforts. Furthermore, the hedge funds want to install Gordon Bethune -- the highly respected former CEO of Continental Airlines -- as United's chairman. He would bring a wealth of expertise to the company.

On the other hand, a proxy fight could just as easily distract management from the turnaround plan. No matter what happens, United Continental shareholders are likely to get a bumpy ride with plenty of ups and downs.

Adam Levine-Weinberg owns shares of United Continental Holdings, The Motley Fool has no position in any of the stocks mentioned. We Fools may not all hold the same opinions, but we all believe that considering a diverse range of insights makes us better investors. The Motley Fool has a disclosure policy.