Please ensure Javascript is enabled for purposes of website accessibility
Log In Help Join The Motley Fool
Free Article Join Over 1 Million Premium Members And Get More In-Depth Stock Guidance and Research
By Jeremy Bowman - May 6, 2016 at 8:06AM

Shares of the e-commerce retailer fell alongside its peers in April.

What: Shares of Internet retailer Wayfair (W 4.04%) fell 13% last month, according to data from S&P Global Market Intelligence, on weakness in the retail sector and as a number of insiders sold shares. 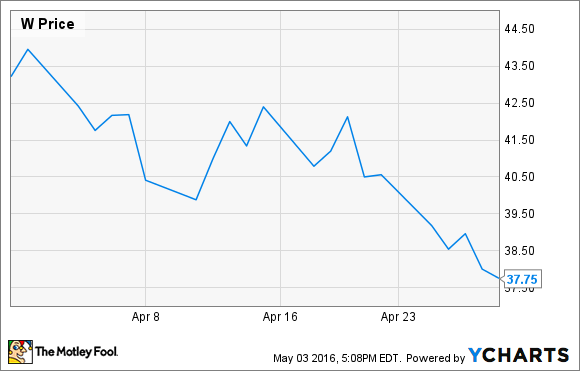 So what: Retail sales, which have been weak for several months, fell 0.3% in March from the previous month, and a number of retailers reported weak monthly comparable sales, including Gap, where comp sales fell 5% in March. Since the news came out in April, a number of stocks have fallen.

In addition, in the first week of April, a number of Wayfair officers sold shares; for the month over $4 million in stock was sold by insiders, according to data from insider-monitor.com. That follows a March when more than $48 million in stock was sold by insiders. Though insider selling is not necessarily a negative signal about a stock, it can frighten individual investors. With 59% of its shares sold short, the majority of investors seem to be betting on the company's demise.

Now what: In its short publicly traded history, Wayfair has proven itself to be a volatile stock, as the e-commerce company is growing sales fast but putting up consistent losses on the bottom line. Last month, the company signed a deal with Porch.com to offer installation and assembly services for its home furnishings in a move that mirrors Amazon.com's Home Services, launched last year. Wayfair will report first-quarter earnings on May 9. Analysts are expecting a per-share loss of $0.32 on $694.9 million.