Please ensure Javascript is enabled for purposes of website accessibility
Log In Help Join The Motley Fool
Free Article Join Over 1 Million Premium Members And Get More In-Depth Stock Guidance and Research
By Jay Yao – May 8, 2016 at 11:29AM

Although new offshore regulations are designed to increase safety, they may cost the industry tens of billions of dollars. How will the regulations affect Chevron?

The Obama administration recently issued regulations designed to reduce the number of well blowouts offshore to prevent another Deepwater Horizon-like event. The explosion of the Deepwater Horizon in 2010 produced the largest offshore oil spill in American history and cost BP more than $40 billion in penalties and clean-up fees.

The energy industry thinks the regulations go too far. Because of the Deepwater Horizon incident, the regulations governing offshore drilling had already been strengthened. New regulations were put in place to address well-bore integrity and well-control procedures and equipment. Operators were required to obtain third-party certification and inspection of proposed drilling processes.

Because of their added costs, the regulations could cost the offshore Gulf of Mexico industry many jobs. Analysts generally peg deepwater as requiring $60-per-barrel crude or higher to be economical, versus the $50 to $60 per barrel for shale. Because of the higher costs, more upfront capital needed, and longer lead times, the new rulings will make companies interested investing in deepwater think twice. Some analysts think the net result of the new regulations will slash deepwater activity in the Gulf of Mexico by 70% over the next 20 years and cost 190,000 jobs.

Other analysts don't think the regulations will have as big of a negative effect due to the fact that the estimated costs of the regulations are spread out over 10 years. ExxonMobil and Chevron management didn't really talk about the impact of the new regulations on their first quarter conference calls, for example.

Because of its strategic goals and the need to raise cash to support its dividend, Chevron has deemed its Gulf of Mexico shelf assets as non-core and plans to divest the assets by the end of 2017. Analysts believed Chevron could realize more than $1 billion for the assets. Because the new industry regulations increase the cost to operate offshore, Chevron will realize less in sales of those assets on the shelf. 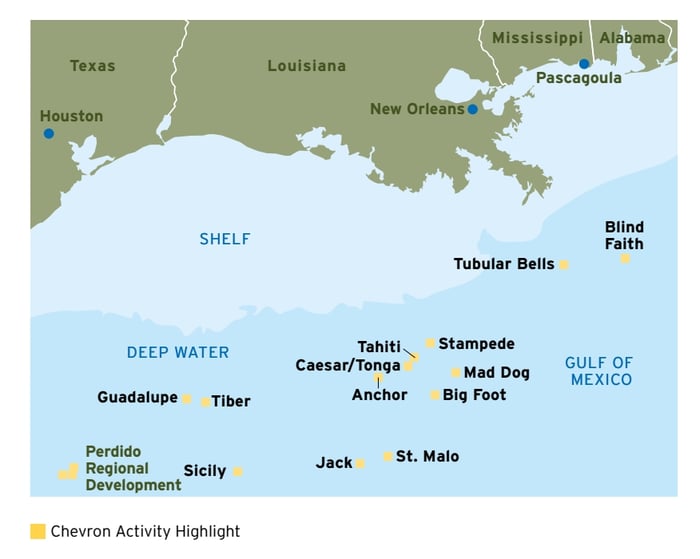 Although it plans to divest its more-mature operations on the shelf, Chevron is still committed to the deepwater Gulf of Mexico. Chevron is one of the top leaseholders in the area, and the company holds leases over very promising reservoirs, such as the Wilcox. Because Chevron has already done much of the work exploring and building infrastructure over the reservoir, the company's brownfield wells have promising economics and can break-even if Brent trades at $20 to $40 per barrel. The new regulations are unlikely to cause Chevron to shelve those projects and the company plans to focus 80% of its development spend in the Gulf on those brownfield deepwater opportunities over the next few years.

Given that greenfield projects will require more work and have higher break-evens, the new regulations will likely dissuade Chevron from investing more in unproven or less developed locations, however. The net effect could be less production growth for Chevron in the Gulf overall.

The new regulations might cause Chevron to invest less in the Gulf and more into the Permian Basin. Earlier in the year, Chevron announced that it was mothballing a $500 million deepwater Gulf of Mexico development in favor for investing in the Permian basin because the economics in the Permian were better. Given the higher costs in the Gulf due to the new regulations, Chevron management might decide to divert even more capital away from the Gulf and into shale and tight plays.

Because the regulations do not apply to projects outside of U.S. sovereignty, the new rules might also cause Chevron to invest more into its operations in deepwater West Africa and deepwater Brazil. Chevron holds working interest in several deepwater fields located in the Campos Basin that are promising.

Investor takeaway
The new regulations will cost Chevron money and could cause the company to focus more on brownfield projects and divert some investment from the deepwater Gulf of Mexico to the Permian. Given Chevron's improving costs in the Permian and the basin's promising potential, Chevron could ultimately come out ahead in the long run from the change in investment, however. If the new regulations reduce overall supply in the long run, some of the negative effects of the regulations might be offset by the increase in crude price caused by the drop in supply.