Please ensure Javascript is enabled for purposes of website accessibility
Log In Help Join The Motley Fool
Free Article Join Over 1 Million Premium Members And Get More In-Depth Stock Guidance and Research
By Andrés Cardenal - May 9, 2016 at 10:30AM

Investing in solid companies at undervalued prices is a powerful strateghy to boost your returns.

Buying strong companies at discounted prices is one of the most powerful and time-proven strategies to obtain superior returns over time. The concept is quite simple. However, it's easier said than done, as the trick is finding undervalued companies that are solid enough to deserve your hard-earned money.

Today, Apple (AAPL 1.62%), eBay (EBAY 2.93%), and Wal-Mart (WMT 0.86%) are promising candidates for investors who are looking to invest in bargain stocks without assuming too much risk.

Apple has fallen from the tree
Apple stock is down by almost 30% from its highs of the last year. The biggest reason for this decline is that sales are moving in the wrong direction. Apple reported a 13% decline in revenue during the March-ended quarter, and guidance for the quarter ending in June implies a decline of 15% at the middle of the range.

This is an important concern, but there are reasons to believe that the decline in revenue is transitory as opposed to a long-term trend. The iPhone 6 enjoyed explosive demand in 2015, as many customers eagerly embraced the new model with a larger screen. Apple sold 61.2 million units during the second quarter of fiscal 2015, a huge increase of 40% versus the same quarter in 2014. Unit sales during the second quarter of fiscal 2016 were 51.2 million, a decline of 16% from 2015 levels, but still up by 17% from the same quarter in 2014. 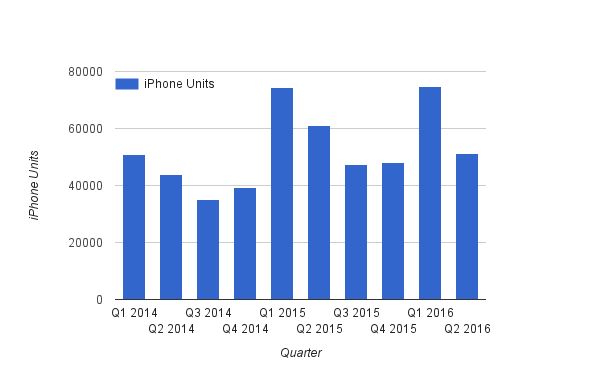 Apple is one of the most-valuable brands in the world, and customer loyalty is truly amazing. According to a recent survey by Kantar, loyalty rates among iPhone users in the U.S. are in the area of 95%. Consumers increasingly upgrading their iPhones during the coming years should have a considerable impact on revenue growth.

CEO Tim Cook said in the last conference call that customers who switched from Android and other platforms to Apple products are at record levels, so market-share gains could be an additional growth driver for Apple going forward.

Time to place a bid for eBay
E-commerce is a promising growth industry, and eBay is the second-largest industry player behind Amazon. The company is performing below its potential, and management is implementing a series of initiatives to boost revenue growth. Among them, eBay is making the shopping experience simpler and more personalized, while at the same time, building better tools for sellers to offer the right merchandise at the right price.

Besides, the business model is remarkably profitable. eBay is a commerce facilitator as opposed to an online retailer, so the company doesn't need to worry about aspects such as inventory risks or logistics costs. This allows eBay to produce huge profit margins, in the neighborhood of 29% of sales at the operating level.

Everyday low prices
In the discount retail industry, size matters. With nearly 11,500 stores worldwide, and making almost $482 billion in annual sales, Wal-Mart is the largest retailer in the world, and this massive scale is a crucial source of competitive advantage. The company leverages its negotiating power to obtain conveniently low prices from suppliers, and it spreads fixed costs on a gargantuan amount of products, which reduces fixed cost per unit. Low costs and competitive prices make Wal-Mart one of the strongest companies in the retail industry on a global scale.

It's not easy for a company as big as Wal-Mart to find new growth venues, so the company calculates that sales growth could be in the range of 3% to 4% in the coming year when adjusting for the impact of store closings and foreign-exchange fluctuations. On a reported-dollar basis, sales are forecast to remain flat.

Management is increasing investments in people and technology. This will probably hurt profit margins in the short term, but it's the right thing to do in order to provide a better customer experience and jump-start growth.

The company has proven its fundamental strength by rewarding investors with growing dividends through good and bad economic times. Wal-Mart paid its first dividend in 1974, and it has increased payments every year since then. The dividend payout ratio is comfortably low -- in the area of 48% -- versus earnings forecasts for the coming fiscal year, so Wal-Mart has plenty of room to continue raising dividends.

Wal-Mart stock trades at a price-to-earnings ratio of 15 times earnings over last year, and the stock pays a respectable dividend yield of 3% at current prices. Not bad at all coming from such a rock-solid dividend powerhouse with an impressive track record of dividend growth over the long term.