Please ensure Javascript is enabled for purposes of website accessibility
Log In Help Join The Motley Fool
Free Article Join Over 1 Million Premium Members And Get More In-Depth Stock Guidance and Research
By George Budwell - May 9, 2016 at 12:02PM

Ariad's stock sprang to life in April. Is this speculative biotech now a compelling buy?

What: The orphan cancer drugmaker Ariad Pharmaceuticals (ARNA) saw its shares jump by 13.6% in April, according to data from S&P Global Market Intelligence.

Ariad's share price received a boost from a positive clinical update for the company's experimental-stage drug, brigatinib, indicated as a potential treatment for ALK+ non-small cell lung cancer, or NSCLC. Specifically, the company reported that the latest analysis of brigatinib's combined Phase 1/2 study revealed a one-year overall survival rate of 100% in patients that have yet to receive treatment with Pfizer's (PFE -0.23%) Xalkori (crizotinib), and an 81% survival rate in patients with prior Xalkori treatment. 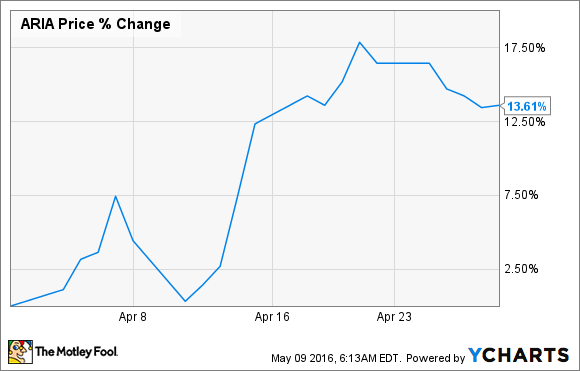 So what: Ariad has been heavily criticized in the past for developing so-called "me-too" drugs, and brigatinib seemed destined to fit that description almost perfectly. However, these latest clinical results imply that brigatinib may have an important role to play in the treatment of patients who are no longer responding to Pfizer's drug, perhaps giving it a well-defined niche in the ALK+ NSCLC market.

Now what: Ariad is hoping to file a New Drug Application with the FDA for brigatinib by the third quarter of 2016, meaning the company could sport two approved cancer drugs (Iclusig & brigatinib) by 2017. The actual value of brigatinib as a potential growth driver, though, is likely to remain a mystery until the drug reaches the market. After all, Pfizer's Xalkori is still in the early stages of its commercialization after being initially approved in late 2011, making it hard to judge the growth potential of this particular orphan cancer market.

As Ariad appears to be a couple of years away from transforming into a cash flow positive operation, and arguably lacks a true franchise level drug candidate at this point, this biotech stock looks like it's going to take a while to create sustainable shareholder value. That's why I'm not willing to add this cancer specialist to my portfolio right now.

However, Ariad did just sign an agreement with Incyte Corporation for its European operations. Per the terms of the deal, Ariad will receive a $140 million upfront payment and tiered royalties on European sales of Iclusig.  Although it's still early, and the details have yet to be released, this agreement should significantly extend Ariad's cash runway while it continues to build out its remaining clinical assets. Simply put, the threat of dilution should be off the table -- at least in the short term.