Please ensure Javascript is enabled for purposes of website accessibility
Log In Help Join The Motley Fool
Free Article Join Over 1 Million Premium Members And Get More In-Depth Stock Guidance and Research
By Brian Stoffel - May 9, 2016 at 7:55PM

You've got to give it to the short-sellers. They have a pretty solid case.

Wayfair (W -2.72%) -- an e-commerce player focused on selling furniture and interior designs -- doesn't look like a great buy on the surface. The company has yet to turn a profit as a publicly traded entity; shares trade for 89 times free cash flow. And there's a goliath that already owns the e-commerce world in Amazon.com.

But despite all that -- and with 45% of the company's float sold short-- Wayfair saw its stock climb 10% following its earnings release on Monday. Considering that the company posted a wider loss than last year, and came in well behind analyst expectations for profitability, it's worth digging into what got everyone so excited.

Revenue is popping
For whatever reason, there are simply some companies that Wall Street is willing to be patient with. Signs of profitability remain elusive, and free cash flow dipped by over $50 million from the same time last year, but the revenue growth at Wayfair has the market convinced that this will be a long-term winner.

Here are a few highlights from the quarter:

Add all of these pieces together and you can see why Wall Street was excited. Virtually every important category saw impressive growth. Perhaps most important of these are total DTC and per-customer revenue growth, which have seen an impressive acceleration of growth since the company went public in 2014.

Not only is Wayfair growing its customer base, but each existing customer is buying more, and the pace of that growth is speeding up. That's no easy task, and it helps explain why the stock is trading for the premium it is.

Spending ramps up as well
As you might have guessed, while revenue growth was impressive, there were mammoth increases in spending by management. Consider:

CEO and co-founder Niraj Shah pointed out that such investments were necessary and paying off, noting that the company took, "about 40% of the U.S. online dollar growth in our categories [home décor and furniture] in the last twelve months." In other words, of every $100 of furniture purchasing that's moved online, Wayfair has captured $40 of those dollars.

That's a big deal, because the amount of home goods bought online has tons of room for growth. 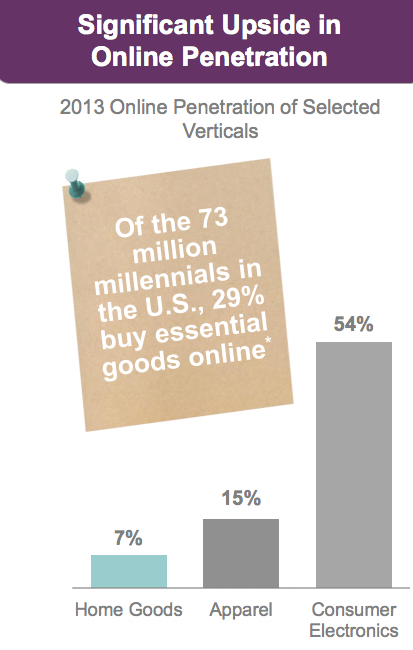 It helps explain why Shah and the company's shareholders are so willing to spend money hand over fist right now in order to grab an outsized piece of market share for the future.

According to the company's own data, the increase in advertising has led to a sextupling in brand awareness in just four short years. 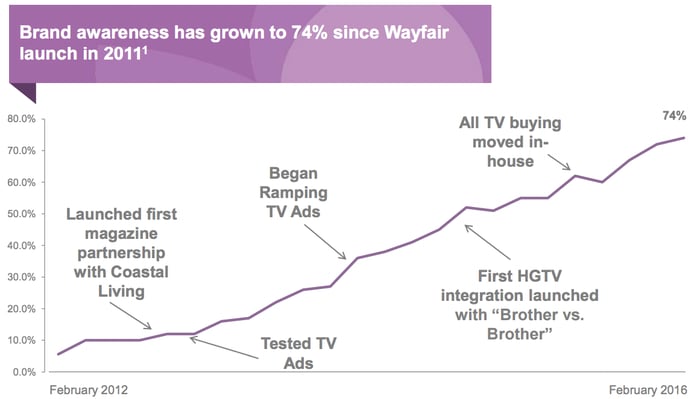 Looking ahead
While domestic revenue growth has been nothing short of amazing, one story for investors to watch is the company's attempt at becoming a global brand. As Shah put it: "Our focus in 2015 and 2016 has been on developing additional European supply relationships to broaden and deepen the product catalog and building out the logistics infrastructure in carrier relationships to ensure a great delivery experience for customers."

Though its still very small, Shah noted that UK DTC revenue grew by 200% during the first quarter and that the opportunity in Western Europe is comparable to the United States.

On a shorter time horizon, the company expects DTC revenue to grow between 65% and 70% -- which is particularly impressive since it is comparing to a 2015 second quarter that saw DTC revenue grow by 81%. That would mean that over two years, DTC revenue roughly tripled.

While investors should keep an eye on rising costs, the real story will be Wayfair's ability to continue grabbing market share in the highly fragmented e-commerce furniture industry.