Please ensure Javascript is enabled for purposes of website accessibility
Log In Help Join The Motley Fool
Free Article Join Over 1 Million Premium Members And Get More In-Depth Stock Guidance and Research
By Brian Feroldi - May 9, 2016 at 1:31PM

What: Shares of Inovio Pharmaceuticals (INO -9.14%), a clinical-stage biopharmaceutical company primarily focused on developing vaccines, jumped by as much as 11% in early morning trading before pulling back a bit in response to the company's first-quarter earnings results.

So what: Inovio had a productive quarter. Here's a few highlights that investors should be aware of:

On the clinical side, the company also shared a handful of recent developments with investors:

The combination of better-than-expected financial results mixed with continued progress on its pipeline caused traders to bid up shares today.

Now what: Inovio's stock has been on fire since the start of the year. Shares are already up more than 44% over that time period, which is a massive move, especially when you consider that the biotech sector in general has been out of favor with investors. For example, the iShares Nasdaq Biotechnology ETF (IBB -1.50%), an ETF that owns a broad range of biotechnology stocks, is down more than 22% over that same time period. That makes Inovio's rise look all the more impressive. 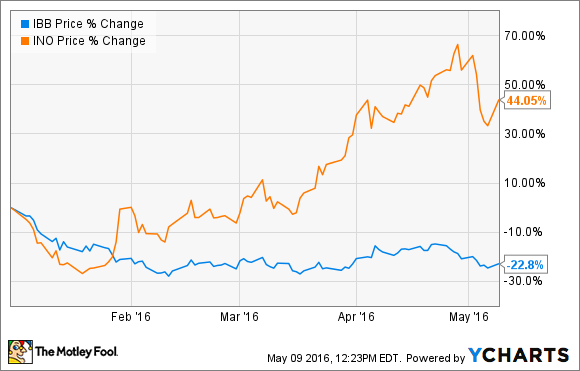 Inovio's stock has captured investors' attention thanks to the explosion in media coverage surrounding the Zika virus. Inovio and partner GeneOne Life Science grabbed the spotlight earlier this year when they announced  their intention to have a Zika virus vaccine enter clinical at some point in 2016.

With excitement for the stock flying high, investors should keep in mind that even if everything goes perfectly for its Zika virus vaccine, it will still be years before the company could produce any revenue from the compound.

For that reason, I think investors should keep their attention focused on VGX-3110, Inovio's cancer vaccine for treating cervical dysplasia. This compound is much further down the regulatory pathway than the Zika virus vaccine and therefore is several orders of magnitude more important to Inovio's future.

With the company gearing up to put VGX-3110 into phase 3 trials later this year, it won't be long until investors know more about this compound's chances of finding its way to market. That makes Inovio a stock that investors with a strong stomach for risk will want to watch closely.