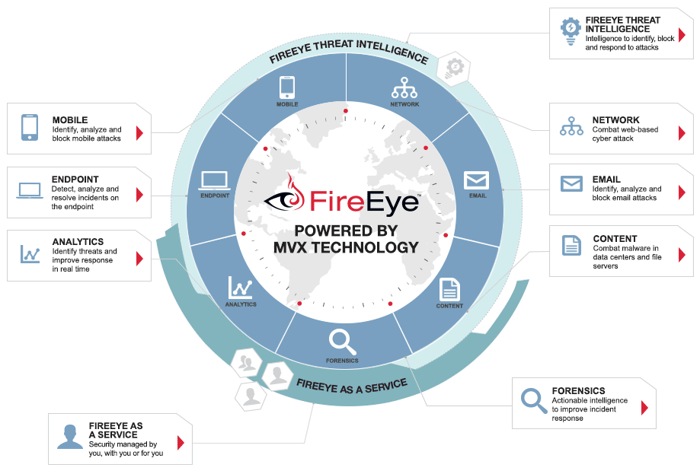 It's been a difficult year for FireEye (NASDAQ:MNDT). Shares of the cybersecurity company are down about 35% year-to-date and more than 20% just this month. Much of that loss was fueled by the company's first quarter earnings: FireEye turned in a disappointing report last week, sparking the sharp sell-off. FireEye's sales and outlook fell short of analyst expectations, and the company announced that its CEO, Dave DeWalt, would be stepping down.

DeWalt is staying on
Dave DeWalt has been FireEye's CEO throughout its entire history as a publicly traded company, which makes his departure notable. On June 15th, he will step down, but he isn't leaving FireEye entirely. During the call, DeWalt clarified how he would serve FireEye going forward:

I am looking forward to my new role as executive chairman in which I will remain active, very active in shaping FireEye's future. In this new role I will be working with Kevin, the leadership team, and everyone at FireEye to increase adoption of the FireEye threat Management platform with a focus on the Company's multi-channel go to market strategies. I will continue to speak to investors, partners, and customers about FireEye's unique position in the market as well as lead FireEye's Board of Directors.

Transitioning to the cloud
FireEye remains dependent on the sale of physical appliances -- they generated 20% of the company's revenue last quarter. However, this is down significantly from 2013, when they generated about half of the top line. FireEye's business is increasingly shifting to the cloud. During the call, DeWalt cited a specific deal as evidence of the company's changing revenue composition:

Our largest transaction in Q1 was an eight-figure cloud email deal in the U.S. federal region, protecting more than 100,000 mailboxes. A year ago, this deal would've been an appliance-based solution ...

The iSIGHT acquisition is already contributing to the company's success
In January, FireEye acquired iSight Partners, shelling out about $200 million in the process. The money seems to have been well spent. During the call, Berry emphasized how iSight was already fueling FireEye's business:

Billings finished above our outlook at $186 million for a year-over-year growth rate of 23%. Our billings performance reflected the continued strength of our subscription products and the overall industry trends Dave [DeWalt] discussed during his comments. I am pleased to tell you that we have been able to integrate iSights offerings into our go to market and sales [motions]. Because of this synergy, we saw several deals that included multiple products including iSIGHT which resulted in better than expected contribution to our billings in the first quarter.

Customer loyalty remains high
FireEye's product revenue declined just over 16% on an annual basis last quarter. Although the company is enjoying strong service and subscription demand, falling product sales may suggest that some of its customers are losing interest. Not so, according to Berry:

... although appliance sales declined overall, our renewal rate remained strong at approximately 90%. Our total average contract length, which includes renewals, as well as new sales, was approximately 31 months, consistent with the 30 months we experienced in the first quarter 2015.

A shift away from product took a toll on FireEye's revenue
FireEye's revenue rose 34% on an annual basis last quarter but still came in at the low end of the company's outlook. During the call, Berry noted that the shift toward services contributed to the disappointment:

As you know, we were expecting product billings and revenue to be basically flat on a year-over-year basis. Based on where we stood at the end of February and more importantly our pipeline for March, we were tracking close to our expectations. However, during the last few weeks of the quarter, we saw a fairly significant change in the composition of the first quarter product pipeline as many of the product heavy deals pushed into future quarters. While we expect some of these transactions to ultimately close as product deals, we also expect that some will switch to FaaS and other subscription offerings. While it is not uncommon to see changes in the composition of our pipeline in the last few weeks of a quarter, the impact on product heavy deals was greater in the first quarter than in previous quarters, and the mix of subscription and total billings was higher than we expected when we first issued our Q1 guidance.

... let's move on to the revised outlook for 2016. Our billings range remains the same in $975 million to $1.055 billion, but we now expect a higher mix of subscriptions than we did in February.

Within the revenue line, we currently expect 2016 platform revenue to increase over 2015 by approximately 25% to 30%, driven by continued strong growth in subscription and support revenue and a decline in product revenue of 10% to 12%.

It won't hire as many people as planned
FireEye isn't profitable, nor does it expect to be in the near future. Still, the company remains committed to achieving profitability. Berry noted that the company would curtail its hiring in an effort to reduce expenses:

... we implemented several cost savings initiatives in the first and second quarters including a net reduction of approximately 200 existing and planned positioned Companywide. We also reduced discretionary throughout the Company, and these savings are already flowing into our operating expense performance for the first quarter.

FaaS is limiting the demand for FireEye's appliances
FireEye-as-a-Service (FaaS) may be the company's single most important product, as it has emerged as a key growth driver in recent quarters. Yet, demand for FaaS may be limiting FireEye's revenue. During the call, management was asked if the growth of FaaS was weighing on FireEye's product sales. DeWalt offered some color:

[FaaS] drives more product subscription and more billings in that area versus revenue in period, and hence why we confirm the billings for the full-year but had to lower the revenue a bit, so absolutely to your question. It's driving [declining product revenue] ...

Did DeWalt fail to sell the company?
FireEye has long been seen as a potential takeover target, given the company's attractive technology, rapid growth, and CEO. Before joining FireEye, DeWalt led other companies that were ultimately acquired (most notably McAfee), and many had assumed FireEye would eventually enjoy a similar fate.

During the call, DeWalt was asked if the end of his tenure signaled that FireEye was no longer for sale. He didn't answer the question directly but offered some comments on what he believed his goals were coming in, and how he viewed the change in management:

One of my goals as a fourth time around here as a CEO, now 17 years during this, 30 years in IT, four years here at FireEye. I was to get the Company IPO'd and get the Company to a billion-dollar track, and a lot of those accomplishments we have been able to achieve here at the Company. ... When is a good window [for me to step down]? Probably either at the annual shareholder meeting which is once a year or maybe at the end of a fiscal year. So this was good timing for us all ... But I really believe the best is yet to come for the Company as we get to the other side, and we really show the world what we can do here with all the pieces this Company has created.

When will FireEye become profitable?
FireEye's management has said that it would eventually achieve operating margins of around 15% to 20%, but it has declined to offer a firm timetable. Berry reiterated that guidance but acknowledged that he doesn't know when the company will hit that target:

I certainly don't have any different view of the operating margin. I still feel good about that. How fast it goes when we get there, is it 2017, 2018, 2019, 2020? We will certainly have to take a hard look at it. But I don't have any reason not to doubt the long-term operating model number.