Please ensure Javascript is enabled for purposes of website accessibility
Log In Help Join The Motley Fool
Free Article Join Over 1 Million Premium Members And Get More In-Depth Stock Guidance and Research
By Lee Samaha - May 11, 2016 at 12:05PM

Illinois Tool Works (ITW 0.35%) versus Caterpillar (CAT -0.26%)? At first glance, they appear strange bedfellows, but looking closely at their prospects reveals a lot about the current state of the industrial economy. The former is an all-purpose industrial with exposure to many parts of the economy, while the latter has heavy exposure to oil and gas, mining, and construction. They offer different things to different investors, but overall, which is the better value?

A summary of the key points:

In a nutshell, Illinois Tool Works is executing well in difficult market conditions, and offers investors good earnings momentum, plus the prospect of some upside given any kind of recovery in general industrial conditions. Moreover, at the conclusion of its enterprise strategy plan at the end of 2017, the company will emerge as a leaner, higher-margin entity.

In terms of valuation, let's look at two considerations. First, enterprise value (market cap plus net debt), or EV, over earnings before interest, tax, depreciation, and amortization, or EBITDA. As you can see below, Illinois Tool Works' forward valuation looks OK -- if not exactly compelling -- but it's noticeably cheaper than Caterpillar's. 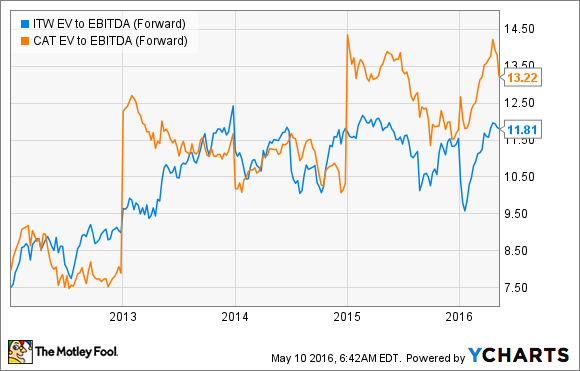 Then, turning to dividend and the potential for future dividends, the charts below show how Caterpillar has double the current yield of Illinois Tool Works. However, its payout ratio is much higher -- suggesting that, unless earnings and cash flow increase markedly for Caterpillar, the company could find it hard to increase dividends in future years. Moreover, Illinois Tool Works is forecast to grow EPS by 17% from 2015 to 2017 while Caterpillar's is expected to decline by 23%. 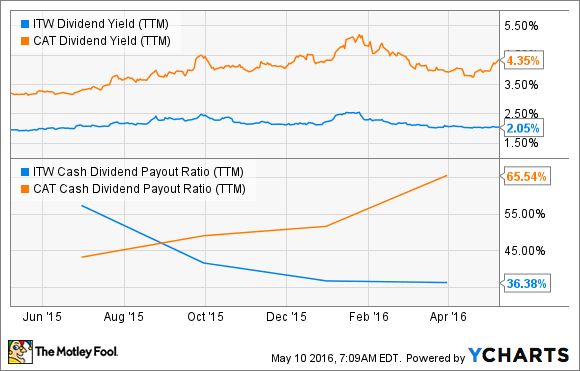 The case for buying Caterpillar stock

Not so fast. It's not difficult to argue that Illinois Tool Works stock is more likely to outperform Caterpillar's in 2016 -- the outlook for oil and gas capital spending has weakened so far this year -- but that doesn't necessarily make it the better buy. In fact, on a risk/reward basis, I would argue that Caterpillar is the pick.

The case rests on the upside potential for Caterpillar's stock given a pickup in oil prices. For an indication of how significant this could be, take a look at Caterpillar's EBITDA and how it more than doubled during the recovery in oil prices from 2009 to 2012. 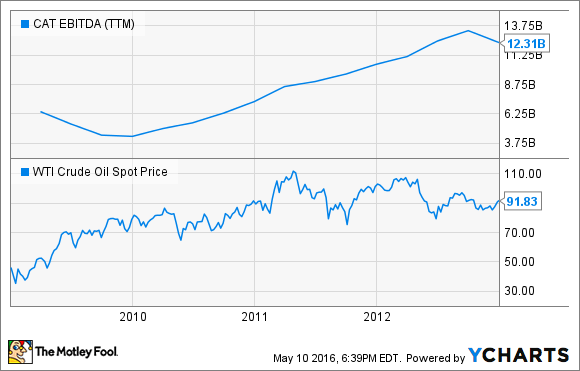 However you cut it, oil and gas matters a lot to Caterpillar. But here's the thing. If oil prices recover -- and a move from $30 to, say, $50 is a 66% move upward -- then Caterpillar's earnings outlook will look much better, and the market will stress itself a lot less about the company's ability to grow, or sustain, its healthy dividend. Suddenly, Caterpillar would become a growth and income stock -- something for everyone.

It's true that Illinois Tool Works also has good exposure to the kind of higher-growth conditions also likely to spur oil price rises that would benefit Caterpillar, but given the former's valuation, it's hard to see significant stock appreciation from here. Moreover, Illinois Tool Works' exposure to the automotive industry could cause problems if China's demand tails off following the initial impact of tax breaks initiated in the winter.

Meanwhile, Caterpillar has significant upside potential from an improvement in oil prices -- that's not to say it will happen. Rather, it highlights that on a risk/reward basis, I think Caterpillar is the better value right now.