Please ensure Javascript is enabled for purposes of website accessibility
Log In Help Join The Motley Fool
Free Article Join Over 1 Million Premium Members And Get More In-Depth Stock Guidance and Research
By John Rosevear - May 12, 2016 at 1:00PM

What happened at TrueCar during the quarter

CEO Chip Perry, who joined the company late last year, has been working to improve TrueCar's relationships with its dealer partners, which had become strained over the last couple of years. That effort is a work in progress, but some early results are beginning to show.

"Average monthly unique visitors" to TrueCar's site, a key metric of consumer interest in the company's services, jumped 21% year over year to 6.7 million. That's an all-time high -- and historically, TrueCar's visitors have increased during the second and third quarters of the calendar year.

But the number of vehicles purchased using the company's services rose just 4%. Worse, it was down sequentially, as you can see in this chart from TrueCar's earnings presentation. 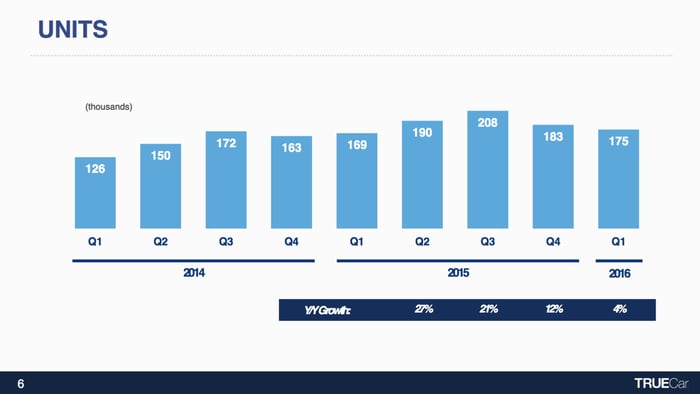 But while growth in overall purchases may be slowing, TrueCar is at least generating good results for its dealer partners. TrueCar's total number of "franchise" new-car dealers rose 2% versus a year ago, recovering after a significant dip in mid-2015 -- and its transaction revenue per dealer was $6,249 in the quarter, up slightly (about 1%) from a year ago.

The upshot: Perry's efforts appear to have largely stabilized TrueCar after its 2015 slide.

What TrueCar said about the quarter

"In the first quarter of 2016, we accomplished what we set out to do, with revenue hitting the high end of our $60-$62 million guidance, units also reaching the high end of our 170,000-175,000 guidance, and adjusted EBITDA exceeding our guidance of breakeven," CFO Mike Guthrie said in a statement. "In the second quarter, we have started to make more significant investments in our three major focus areas: dealer sales and service, our product and technology platform, and consumer and dealer research."

"We rolled out our Dealer Pledge in late March and began promoting it at the National Automobile Dealers Association Convention," CEO Chip Perry said in a statement. "We have received positive feedback from the dealer community, and I believe this new approach is enabling us to build a bridge back to the dealers who left us last year, including AutoNation.

"We still have plenty of work to do and while we are starting to see benefits from changes we're making, I don't expect to see improved financial momentum until later in the year. Regardless, I am excited about our early progress and about the plan we have in place to position TrueCar as the category winner in this market and to drive more attractive top-line growth and better margins in 2017 and beyond."

Looking ahead: TrueCar's guidance for the second quarter and full year

Guthrie gave the following guidance for the second quarter:

For the full year, Guthrie expects revenue to come in between $270 million and $275 million, with adjusted EBITDA at roughly breakeven levels.