Please ensure Javascript is enabled for purposes of website accessibility
Log In Help Join The Motley Fool
Free Article Join Over 1 Million Premium Members And Get More In-Depth Stock Guidance and Research
By Palbir Nijjar - May 12, 2016 at 1:13PM

After a bumpy transition year, Zillow's investment in Trulia is beginning to pay off. 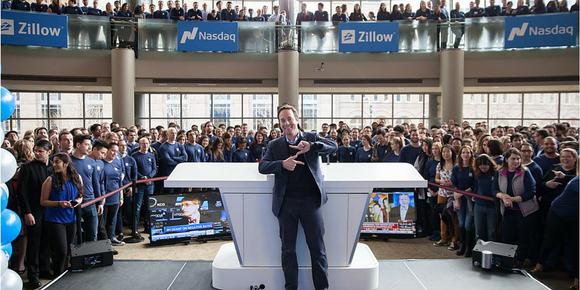 One of my processes in evaluating an investment opportunity is to go back to previous earnings calls and management interviews to observe if the management team is executing on past promises. In a world where information is abundant, it's easy to get caught up in current media hype. Taking a step back from today's noise can help you become a better investor.

The work we are doing this year lays the foundation for an incredibly bright 2016 and 2017. However, 2015 is a transition year, and we're trending a couple quarters behind where we'd like to be, due to the protracted FTC approval process which only ended two months ago.

When I hear the words "transition year" after an acquisition, I think of integration issues, loss of focus on products and service, lower revenue, and lower profit. The market reacted accordingly, with shares falling 10% after Rascoff's comments. The stock remained essentially flat the remainder of the year.

The integration of the two companies was completed last September, and Zillow has reported two quarters of financial statements since then. Let's check in to see where Zillow is in its transition. 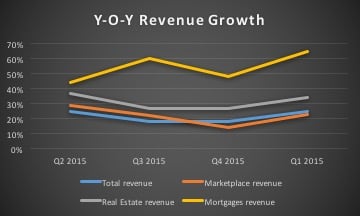 Management also increased its guidance for the remainder of the year to be approximately $825 million to $835 million, which, at its midpoint, is an increase of over 27% on Trulia and Zillow's combined pro forma revenue in 2015.

In the Q2 2015 earnings call, Zillow's first full quarter with Trulia under its umbrella, Rascoff prioritized growing the audience at Trulia:

As we integrate Trulia's agent business, we're also very focused on growing the Trulia consumer brand and product. Over the past year, Trulia's top-line audience growth has stalled. Together, our Zillow and Trulia product and marketing teams are working to reinvigorate growth. We're sharing best practices across the brands, and there are a number of areas where our experience with Zillow can help Trulia. Soon, when the Zillow and Trulia ad products will be merged, the combined audience scale of Zillow plus Trulia becomes much more relevant than traffic on one brand or the other.

However, Trulia traffic growth is a priority, and we're putting significant resources and effort behind it, and we will turn around its traffic trends.

A year later, the turnaround in driving Trulia traffic appears to have taken effect. Leads to Premier Agents at Zillow and Trulia are up just under 60% year over year. Although Zillow didn't break out Trulia data independently from Zillow, Rascoff did have this to say about its marketing efforts and lead generation at Trulia:

The first quarter was full of positive surprises for Zillow shareholders. As a result, shares climbed about 10% after the earnings call.

Going forward, investors will want to see continued momentum in revenue growth. Now that the acquisition of Trulia is in the rearview mirror, management has focused on four strategic priorities:

The first priority, growing its audience, is crucial to Zillow's success. Advertisers typically follow eyeballs, so if Zillow can continue to grow its user base, the company will create a powerful network effect, which competitors will have a difficult time matching.

Zillow reported 166 million unique users to its sites in March, up 22% over the prior year. According to comScore, the company commands 63% of online and mobile traffic market share in the online real estate space.

The online real estate market is continuing to grow, and Zillow is looking to take a larger piece of a growing pie. Sales and marketing expense in the first quarter was 53% of revenue, compared with 47% of revenue last year. Over the next year, investors should pay attention to see if the company's marketing efforts are paying off by way of a higher market share of the online real estate market.

In addition to higher audience growth, investors should also pay attention to further benefits from the Trulia acquisition. When Zillow announced the Trulia purchase, Trulia was valued at $3.5 billion on expected 2014 revenue of about $253 million, a price-to-sales multiple of nearly 14. Today, Zillow with a combined Trulia is valued at just under $5 billion, at a multiple of about 7.5 times sales. To date, the merger hasn't worked out as expected for shareholders.

Part of the justification for Zillow's acquisition of Trulia was that it can achieve annual synergies of $100 million. Within eight weeks of the completion of the acquisition, the company had laid off 350 employees and reorganized the combined 2,000-person company. Zillow management has continued to state that the company is on pace to achieve its $100 million target in 2016. As it gets closer to year-end, investors should keep a close eye on whether these targets are in fact achieved.