Please ensure Javascript is enabled for purposes of website accessibility
Log In Help Join The Motley Fool
Free Article Join Over 1 Million Premium Members And Get More In-Depth Stock Guidance and Research
By Travis Hoium - May 13, 2016 at 4:27PM

Investors weren't as disappointed with Sunrun's numbers as SolarCity's, but that doesn't mean the numbers were good.

In the same week that SolarCity (SCTY.DL) reported less than stellar performance in the residential solar market, Sunrun (RUN 4.28%) reported similarly terrible numbers. Costs jumped dramatically, NPV generation dropped, and bookings fell short of what even management expected. But unlike SolarCity, Sunrun thinks it will still deliver 285 MW of deployed solar in 2016 with an NPV of $1 per watt. And that was enough to get investors a little bit excited about the stock.

Here's what you should know beyond the headlines

One of the keys to watching the residential solar industry is watching cost per watt and what companies say they're generating in value per watt. The discrepancy between its costs versus competition and its value generation versus competition has long been my biggest problem with Sunrun, and this quarter was no different.

You can see below that Sunrun's cost structure is not only higher than those of its biggest competitors, SolarCity and Vivint Solar (VSLR), it's much higher. Installation costs alone are almost as much as SolarCity's entire cost structure.

Data source: Company earnings releases. Note: Sunrun's total cost per watt figure has been adjusted to include Nevada exit charges to make it comparable to SolarCity and Vivint Solar.

Below you can see a breakdown of where Sunrun's costs came from. Note that the $4.11 cost per watt figure below does not include costs associated with exiting its business in Nevada, which SolarCity said was a big reason for its increase in sales and marketing costs in the quarter. 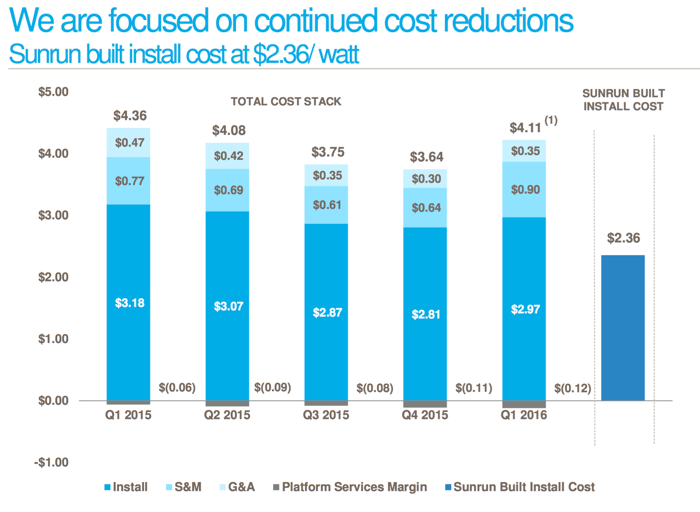 Inexplicably, Sunrun estimates that its project NPV is $4.51 per watt compared to just $3.46 per watt at SolarCity. Sunrun is either charging more for solar than competitors, estimating much more in renewal value, being very aggressive in how its accounting for investment tax credit rebates, or a combination of all three. There's no other explanation for how the company could create more value than SolarCity, despite having 37% higher costs. And still, it's easy to argue that Sunrun isn't creating any long-term value at all.

The misleading numbers in NPV

Let's take a look at the total of $21 million in NPV Sunrun said it created in the first quarter. That's less than the $31 million added to estimated retained value of purchase or renewal. And that doesn't include about $14 million in costs associated with exiting the Nevada market. If those two were included, the net NPV contracted during the quarter would be a loss of $24 million.

I think the way Sunrun calculates NPV is misleading because it assumes there's hundreds of millions of dollars in value for 20-year-old solar systems. There's no evidence today that customers will want to renew a lease at 90% of the prevailing electricity rate (Sunrun's assumption) with 20-year-old equipment. It wouldn't make sense to, given the fact that solar costs are falling year after year. The better assumption would be that Sunrun has to remove the solar system at its own cost, which it is contractually obligated to do, per the company's own SEC filings.

Sunrun's numbers looked a little better than SolarCity's and Vivint Solar's on the surface, but dig a little deeper, and you see that its competitive position isn't all that strong. As the industry gets more crowded, I don't see how the company can continue being competitive given its much higher cost structure relative to its peers.