Earlier this month, hip teen clothing retailer Aeropostale (NYSE:AROPQ) filed for Chapter 11 bankruptcy. In yet another sign that clothing retail stores are struggling, the company announced its intention to emerge from bankruptcy later in 2016, but with the closure of all of its stores in Canada and 113 of its 739 stores in the U.S. In the meantime, the stock has been delisted from the New York Stock Exchange and rendered practically worthless. What do Aeropostale's woes tell us about the industry, and which companies are in the best position to thrive going forward?

What it means to be cool

Back in the day, all of the cool kids had trendy brand names plastered across the front (or back) of their clothing. The trend has changed, and style today, perhaps encouraged by social media, embraces individualism and uniqueness. Rather than shopping at a favorite store, young shoppers are taking to the Internet to do research on specific items and deals first. Online ordering and heavy discounting have also taken a toll on the industry, especially mall-based retailers. Aeropostale simply hasn't been able to adapt, and after five years of falling sales and mounting losses, the company finds itself in today's state of affairs.

In this new age of custom looks on a dime and online, who is transforming their business to keep up with the times? Let's look at three companies that are successfully navigating the current clothing-retail environment.

The Gap (NYSE:GPS) has had its share of problems recently. Its flagship Gap brand is attempting to transform its style to appeal to shoppers, but in the meantime, sales and profits have been falling. 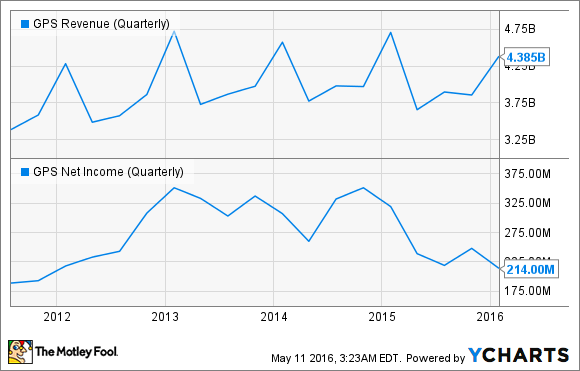 This overall drop in sales has been offset by an increase in sales at the company's Old Navy stores, which focus on the bargain-hunting demographic. Old Navy reported a fourth consecutive year of rising sales in 2015. The Gap also owns Athleta, a women's performance-apparel company. There were 120 Athleta stores at the end of 2015, with an additional 15 expected to open in the next year. The Gap hopes to continue to ride the success of the "athleisure" style movement with its Athleta brand, and will launch Athleta Girl later in 2016 in an attempt to connect those offerings to teens.

Also making the connection that shoppers today are looking for bargains online, the company launched an e-commerce platform for its Banana Republic Factory and Gap Factory discount stores. With revenue and profit falling as of late, some investors have started to worry about the possibility of an increase in store closures, a trend that preceded the bankruptcy for Aeropostale. But with the push into building out a strong online presence and a diversified stable of brands, I think The Gap will do just fine.

American Eagle Outfitters (NYSE:AEO) has been able to steadily grow its business with the "high-quality and trendy at a value" approach. While sales have kept up a modest but rising trend over the last five years, bottom-line profit has seen a recent uptick. 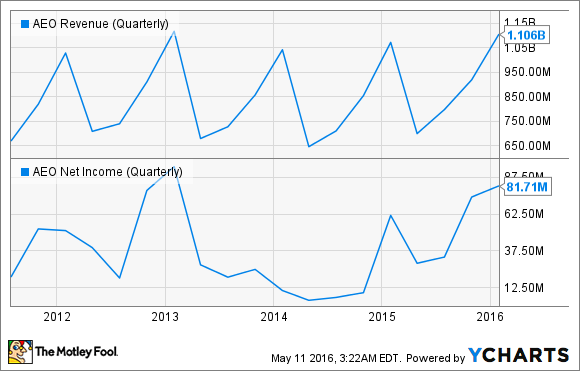 What has been the strategy? The company has been closing underperforming stores in the U.S. and expanding its footprint internationally. American Eagle also has an international online presence, and has the ability to ship to 81 countries. This global e-commerce presence paired with the trimming of less profitable segments has been the right mix of ingredients in recent years.

In addition to its more than 1,000 company-owned stores, American Eagle also licenses over 140 locations internationally. Management would see that number growing to over 170 by the end of this year. This strategy of trimming in the U.S. and expanding overseas, especially through licensed stores versus company-operated stores, is expected to result in another year of steady top- and bottom-line growth for the business. The trendy value tag isn't just catching on with teens here, but in other countries as well, and American Eagle is cashing in.

Abercrombie & Fitch (NYSE:ANF), another old shopping-mall favorite among past generations of young people, hasn't suffered the same hardships as Aeropostale. While it has been a rough road with plenty of ups and downs, the company has been in the midst of aggressive rebranding. 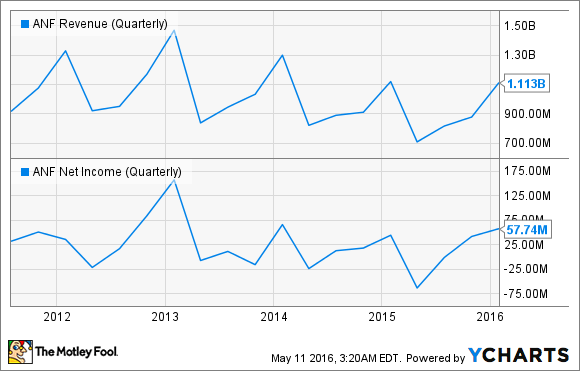 The former "sex sells" clothing image has been ditched, and Abercrombie has expanded its line of fashion to encompass not just teens, but also adults. As the company has grown up with its client base, it has begun to realize that simply embroidering a name on a shirt can only go so far in growing a business. While 2015 saw sales drop once again, the second half of the year saw the new strategy starting to gain some traction. Total company comparable-store sales, which declined 8% in 2014, slowed to a 3% drop in 2015. International comparable sales, which were down a shocking 12% in 2014, trimmed down to only a 1% decline in 2015, helped by a 6% increase in the fourth quarter of the year.

Like its rival American Eagle, Abercrombie is also aggressively closing down storefronts in the U.S. and expanding internationally. The 40 expected store closures in the U.S. will be replaced with ten new store openings, but half of these will be discount outlets rather than full-price models. While the company might be a little behind the curve in adapting to the new retail environment, the changes are better late than never. Management sees revenue and comparable-store sales flattening or turning slightly positive in 2016.

While the way consumers look for and spend money on fashion continues to evolve, clothing retailers that realize the decreased importance of storefronts and the increased importance of an online shopping option will fare the best during this transition. With the increasingly price-conscious consumer able to shop and compare items online looking for the best deal, companies offering unique styles for a bargain will also remain relevant. The work that The Gap, American Eagle, and Abercrombie & Fitch have put into addressing these changes will help them thrive where Aeropostale has recently struggled.